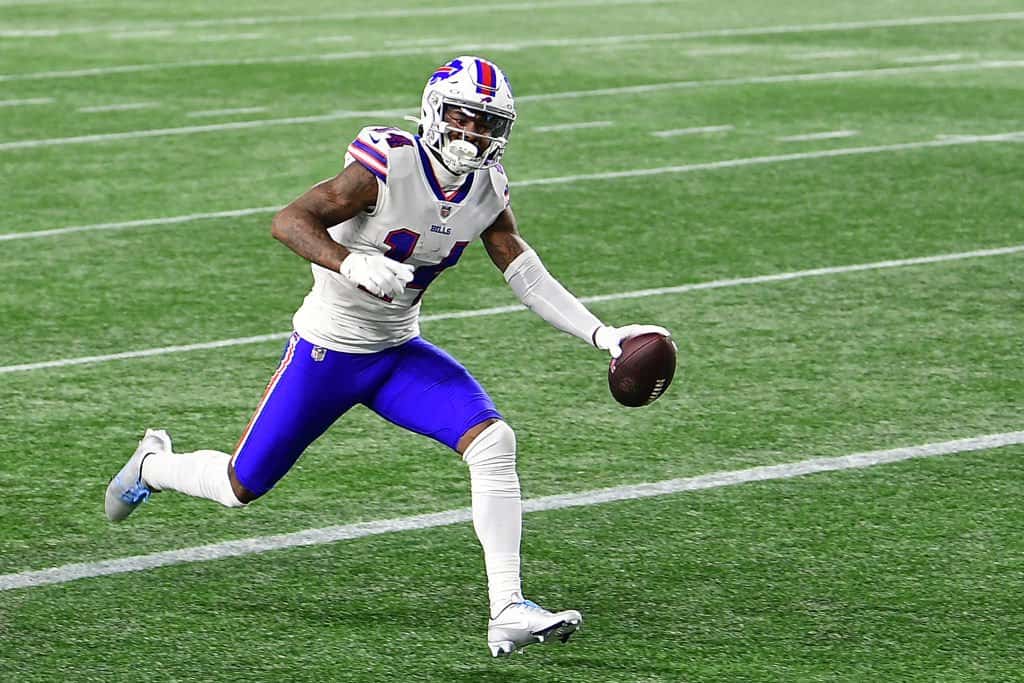 The final week of the NFL season is always a strange experience. Some teams are desperately fighting for a playoff spot, while others have nothing to play for. In order to properly evaluate players in this rather unique environment, we will use the Offensive Value Metric (OVM), a measuring system created by the (Bx) Movement to evaluate players based on how much value they are providing to their respective offenses. For the last time during the 2020 regular season, let’s use the OVM to rank the NFL’s top wide receivers of the Week. In Week 17, Stefon Diggs was the WR at the top of the list. 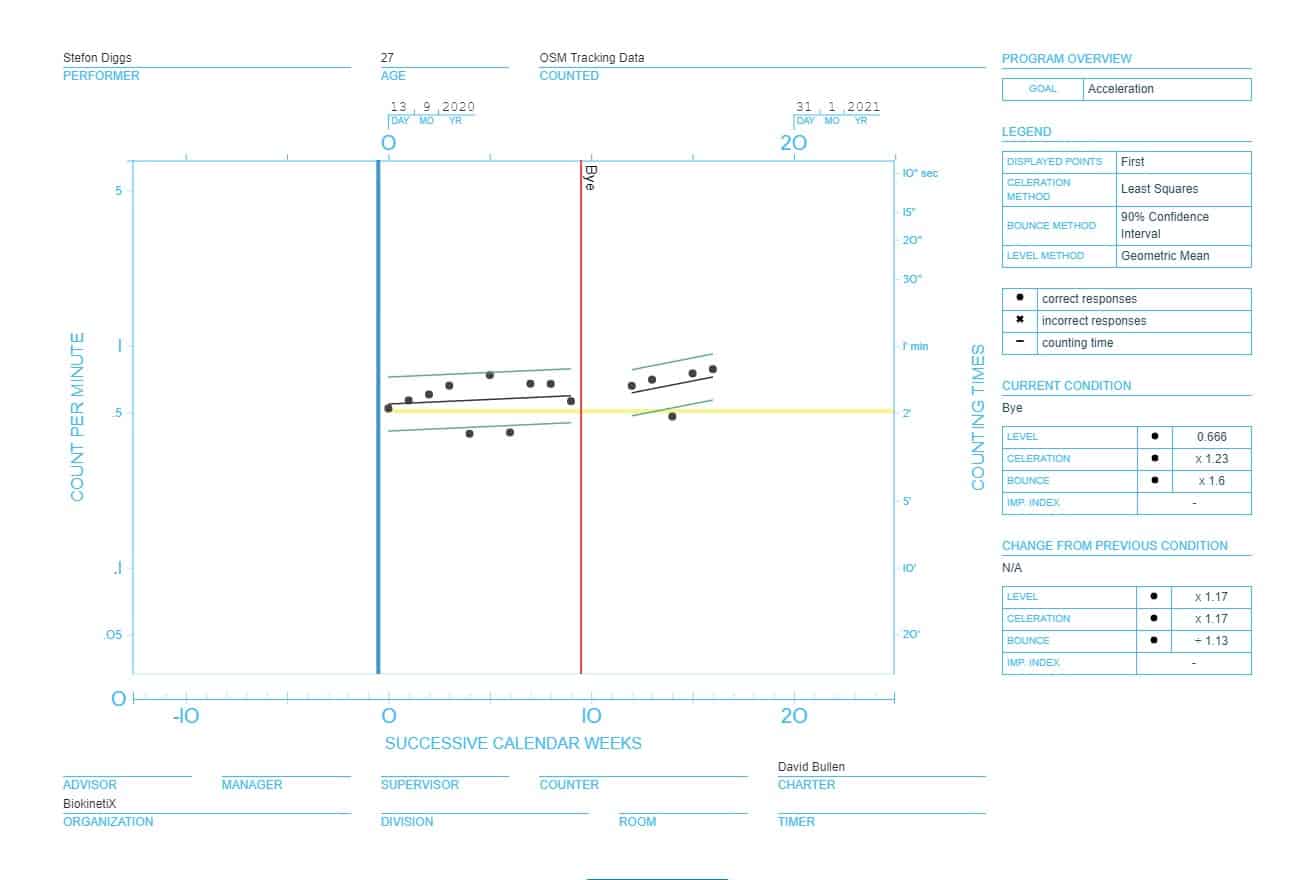 The Buffalo Bills ended the regular season by soundly thrashing the Miami Dolphins. Before leaving the game early, star wide receiver Stefon Diggs showed why he has been one of the NFL’s best players in 2020. He ended the season leading the NFL in both receptions, with 127, and yards, with 1,535. He also currently holds the fifth-highest overall OVM grade, at 36.41.

During his shortened Week 17 performance, Diggs caught 87.5% of his targets, tied with a large number of players for the sixth-highest percentage among qualifying wide receivers. He also averaged 3.4 yards of separation on those targets. That number might not look particularly impressive. However, important context is missing. Diggs was given the eighth-lowest amount of cushion among qualifying wide receivers at the time of the snap, at 4.3 yards. 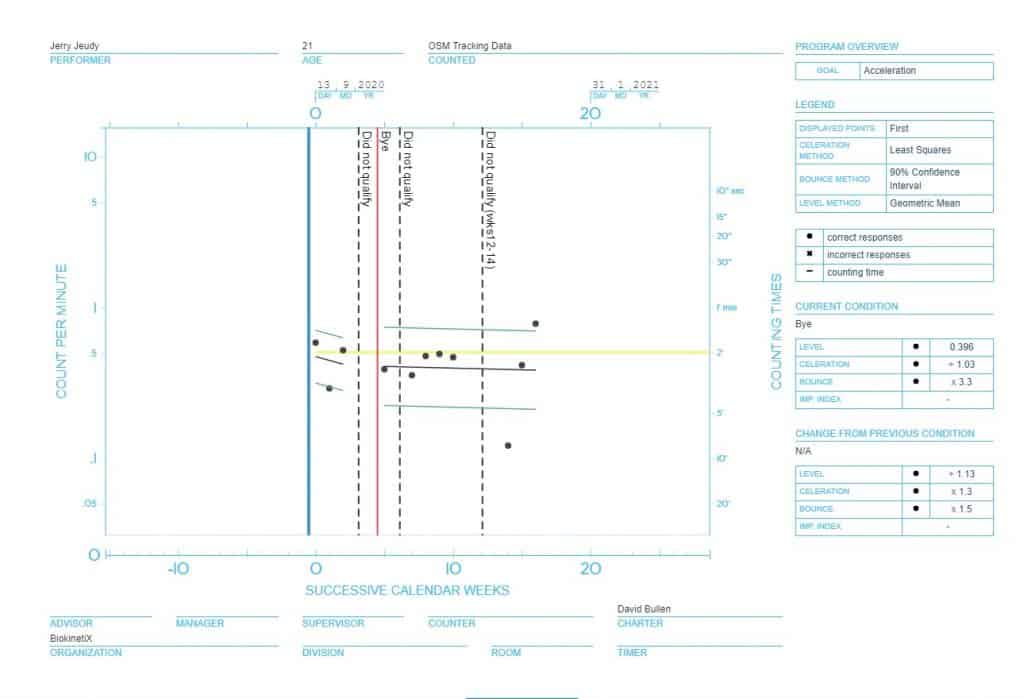 Jeudy has had a mixed rookie season, something that is perfectly exemplified by his performances in the least two weeks. In Week 16, he dropped an astonishing five passes. Then, in the final week of the regular season, he bounced back in a big way. It was his best game of the season both in terms of his traditional statistics and his OVM grade, which was more than 11 points better than his previous high.

The primary factor influencing Jeudy’s high OVM grade was his outstanding average of 15.3 yards after the catch, the second-highest average among all players on Sunday. Even more impressive, his average was 10.4 yards higher than expected, the highest differential of Week 17. 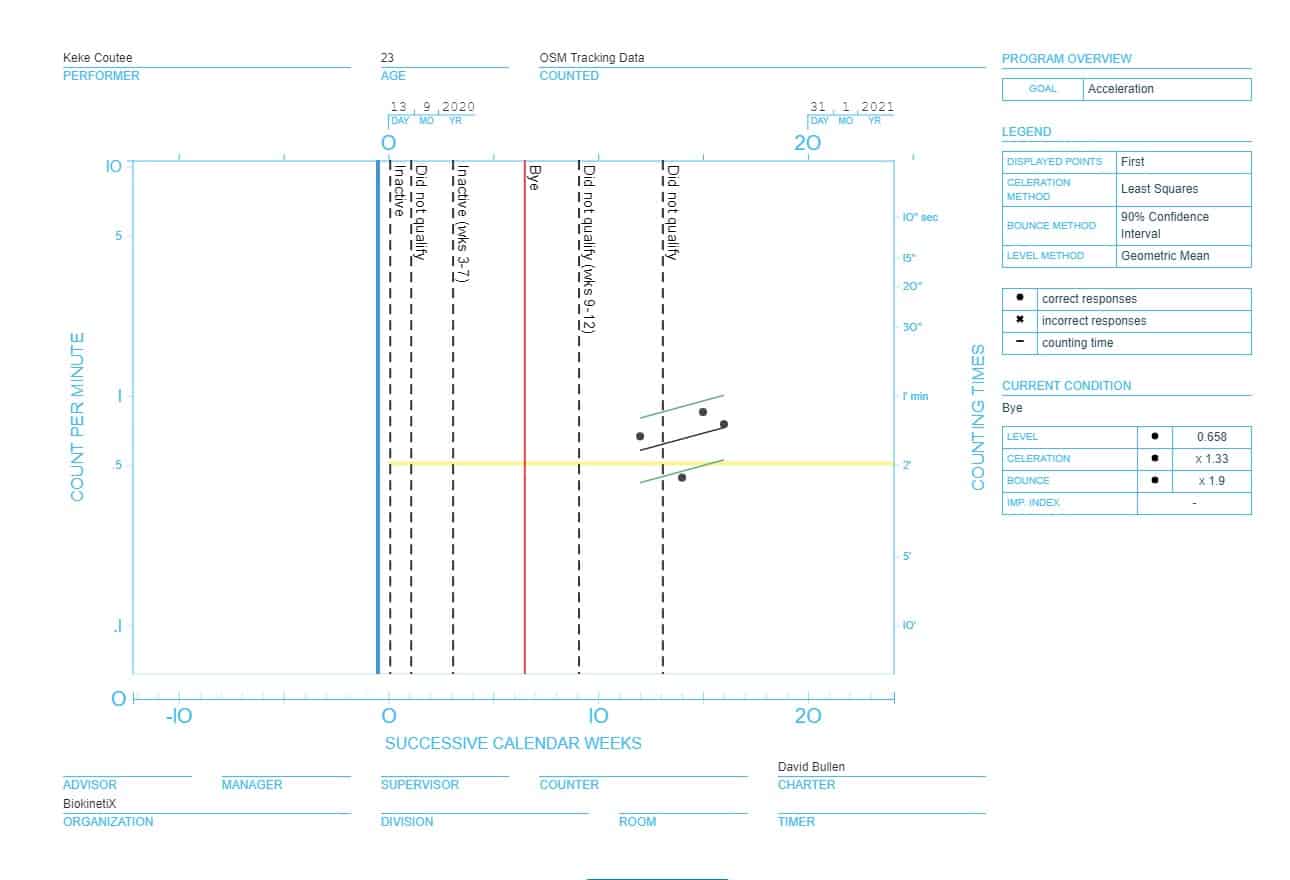 Will Fuller’s suspension before Week 13 forced the Texans to look elsewhere for production. Coutee was the primary benefactor of Fuller’s absence, qualifying for an OVM grade in four out of the five weeks since. In three of those games, he has graded highly enough to earn a spot on our list, including a week-leading performance in Week 16.

On Sunday, like Stefon Diggs and several other wide receivers, Coutee caught 85.71% of his targets. Much like Diggs, what sets Coutee apart from apart from the others was his ability to create separation. He averaged 5.2 yards of distance from defenders when targeted, the highest average among all players in Week 17. That average compares favorably to the amount of cushion he was given, at 6.1 yards.

Despite the historic success of rookie quarterback Justin Herbert, Williams is actually had a down year in most respects. His receiving yards dropped from 1,001 yards to 756, although he did have three more touchdowns than in 2019. Thanks to a low overall catch percentage, his season-long OVM grade dipped slightly as well, although not by an enormous margin. However, Week 17 was his highest grade of the year by more than five points.

Williams matched Stefon Diggs and Keke Coutee with a catch percentage of 85.7%. That was his highest percentage in a game in which he was targeted more than twice. He was also given just 3.4 yards of cushion on average by defenders. Despite that, he still managed 2.3 yards of separation, resulting in a relatively low differential.

Despite enduring a season hampered by injury, the 49ers put up a tough fight against the playoff-bound Seattle Seahawks. They couldn’t quite pull off the win, but it was still an impressive display of resilience from a team that didn’t have the best of luck this past year. The team’s receiving production was split among several wide receivers, with Bourne leading the way.

He caught 83.33% of his targets and averaging 3.5 yards of separation when targeted, both well above average. He also averaged eight yards after the catch, the sixth-highest average among qualifying WRs in Week 17.

Any game in which an offense totals 377 passing yards is usually going to involve multiple wide receivers who played at a high level. That includes McKenzie, who was largely a role player during most of the regular season. Like his teammate, Stefon Diggs, McKenzie had little trouble against a Dolphins defense that had been elite for most of season.

Interestingly, most of McKenzie’s advanced metrics are actually quite poor. For example, his 66.7% catch percentage ranks well below the other players on this list. However, he also accomplished a somewhat rare feat. On Sunday, McKenzie averaged more yards of separation, at 3.6, than the amount of cushion he was given, at 3.3. He was the only qualifying wide receiver to do so in Week 17. Even more impressively, he managed it despite that 3.3 yards of average cushion being the second-lowest amount of space given to any player.

With their win in Week 17, Washington became part of a small group of NFL teams to make the playoffs with a losing record. Certain NFL fans might be upset by that, particularly given the strange circumstances of that game on Sunday night. However, I doubt the team will complain too much about reaching the playoffs for the first time since 2015.

Sims played a key, if unassuming, in their victory. While his box score statistics are unimpressive, he excelled on several advanced metrics. He averaged 5.1 yards of separation when targeted, the second-highest average of the week, although doing so was made easier by the 8.4 yards of cushion he was given on average. Additionally, Sims was the only wide receiver on this week’s list, and one of just two qualifying WRs in Week 17, to catch 100% of his targets.

Tennessee edged out a victory over the Houston Texans on Sunday, winning the AFC South in the process. Brown, who in just two seasons has established himself as one of the NFL’s top wide receivers, caught a deep bomb from quarterback Ryan Tannehill to set up the game-winning (and division-winning) field goal. However, Brown’s performance was more than just that one play.

In many of his past appearances on our lists, Brown earned a high OVM grade primarily because he excelled after the catch. Week 17 was a different story. His yards after the catch numbers were actually fairly pedestrian by his standards, at just 3.8 yards on average. Instead, he was remarkably efficient, catching 90.91% of his targets, the third-highest percentage among qualifying WRs in Week 17.

The ever-controversial Brown had his best game of the season on Sunday, thanks in part to some help from quarterback Tom Brady. The veteran QB targeted Brown several times in the final minutes of the team’s blowout victory against the Atlanta Falcons. That gave Brown enough catches to reach the threshold for a salary bonus. Regardless of the motivations behind his high number of targets, however, Brown played a highly efficient game.

He created an average of 3.9 yards of separation and was also impressive after the catch, with an average of 8.4 yards. Both of those numbers ranked fourth among qualifying wide receivers. However, Brown’s catch percentage of 78.57%, while above-average, is too low for him to rank higher on this list.

The Kansas City Chiefs already had the AFC’s number one seed locked up before Week 17 started. As a result, they rested most of their starters on Sunday. That left room for some of their backups to shine. Among the wide receivers, Robinson did the best job of taking advantage of this rare opportunity, gaining enough yards to reach a career high for the season.

He caught 85.71% of his targets, tied with many other players on this list. Robinson also averaged 3.8 yards of separation, the eighth-highest among qualifying wide receiver.