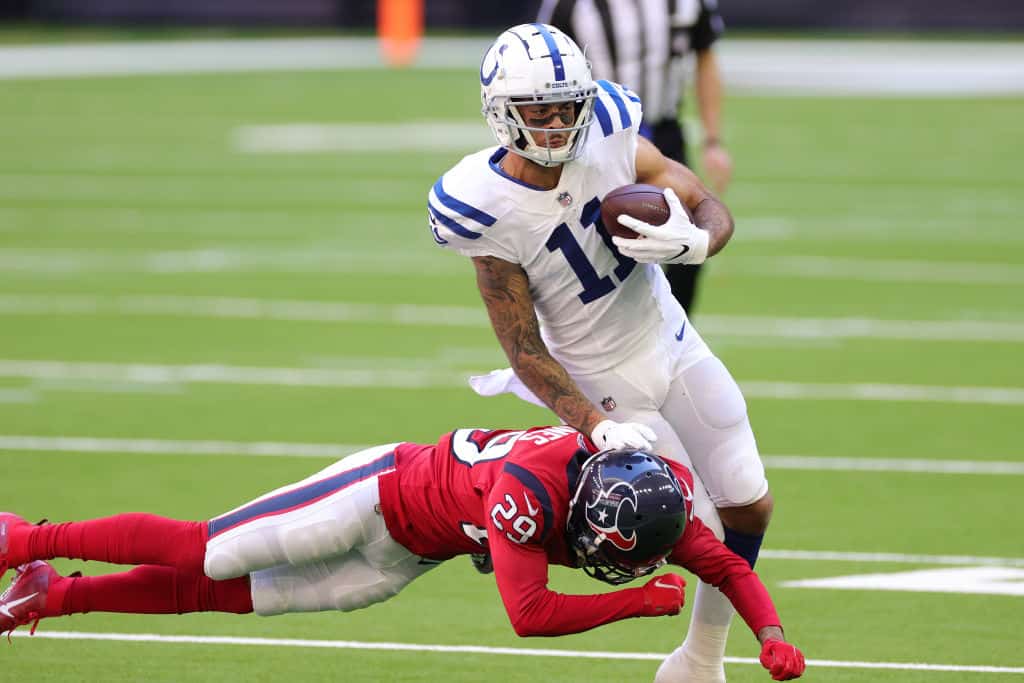 The NFL regular season is just over three-quarters of the way to its end, and the playoff races are heating up. As the margins for error narrow, players of all stripes, from rookies like Michael Pittman Jr. to established veterans like Davante Adams, need to play at an elite level. So, let’s use the Offensive Value Metric (OVM), a grading system created by the (Bx) Movement to measure how impactful a player was on their offense, to find the top wide receivers from Week 13. 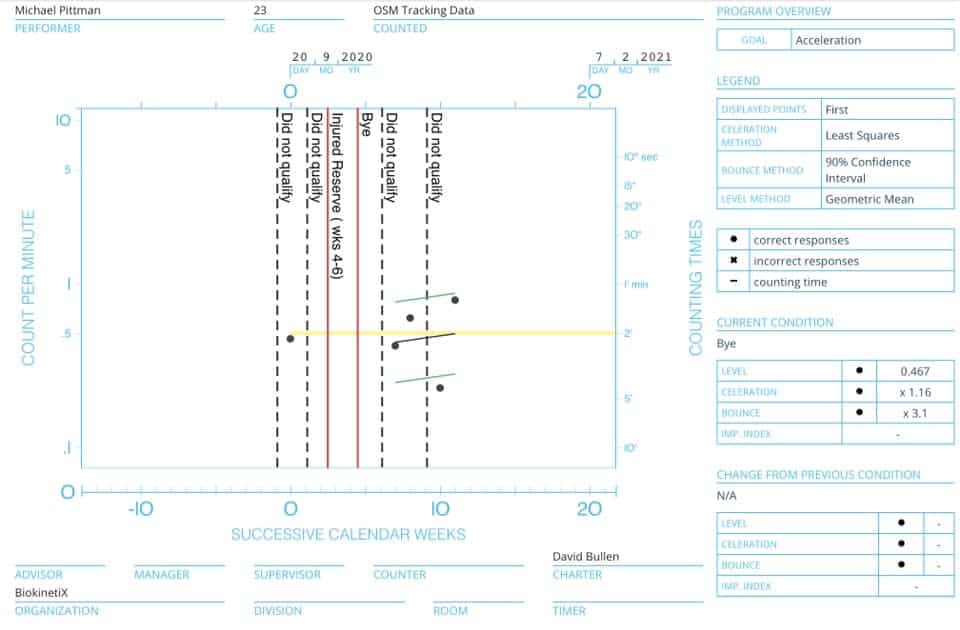 The Colts edged out a win over the Houston Texans on Sunday, pulling them into a tie for the AFC South lead. Rookie Michael Pittman Jr. was a crucial contributor to their victory. Although his box score statistics don’t seem all that impressive, his play earned him his best grade of the season by more than 10 points.

Looking at his advanced metrics, Michael Pittman Jr. was one of two wide receivers this week to catch 100% of their targets. As I’ve mentioned in the past, that is usually a surefire way to make this list. Pittman also averaged 4.6 yards of separation, the fifth-highest yardage total of the week. The combination of those two statistics earned him Week 13’s best grade despite his 5.4 yards after the catch being 0.1 yards lower than expected according to the NFL’s advanced calculations. 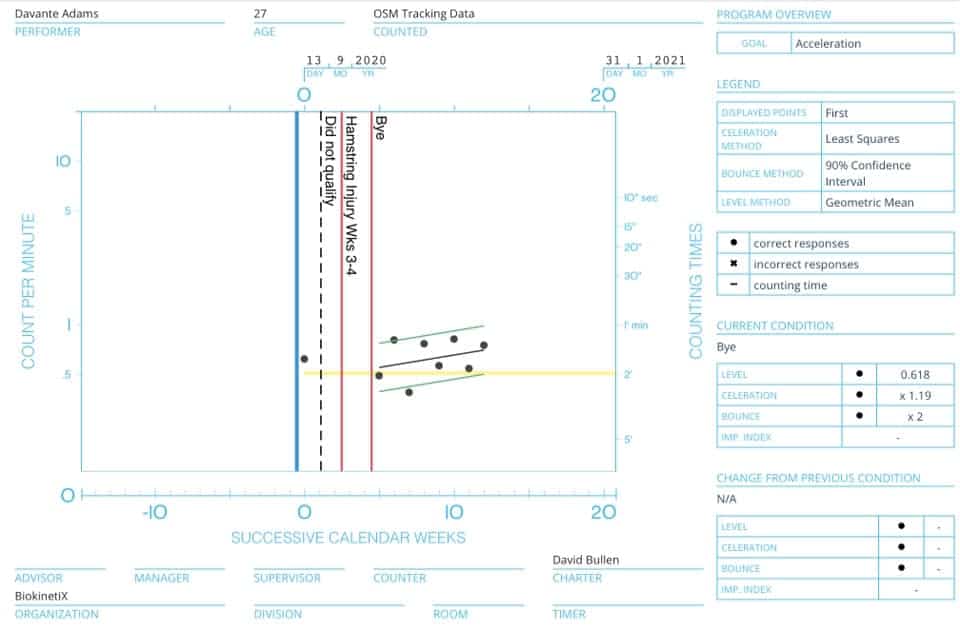 Adams continues what is the best season of his career, according to the OVM, with another impressive grade. His grades have fluctuated slightly over the last several weeks, but they have still been high enough on average for him to maintain the second-highest overall OVM grade among wide receivers this season.

Adams’ high Week 13 grade was in large part the result of him being given just 3.5 yards of cushion when the ball was snapped. That was less than all but one other wide receiver. Despite the tight coverage, Adams still managed to average 2.6 yards of separation. That enabled him to catch 83.33% of his targets, well above this week’s average. 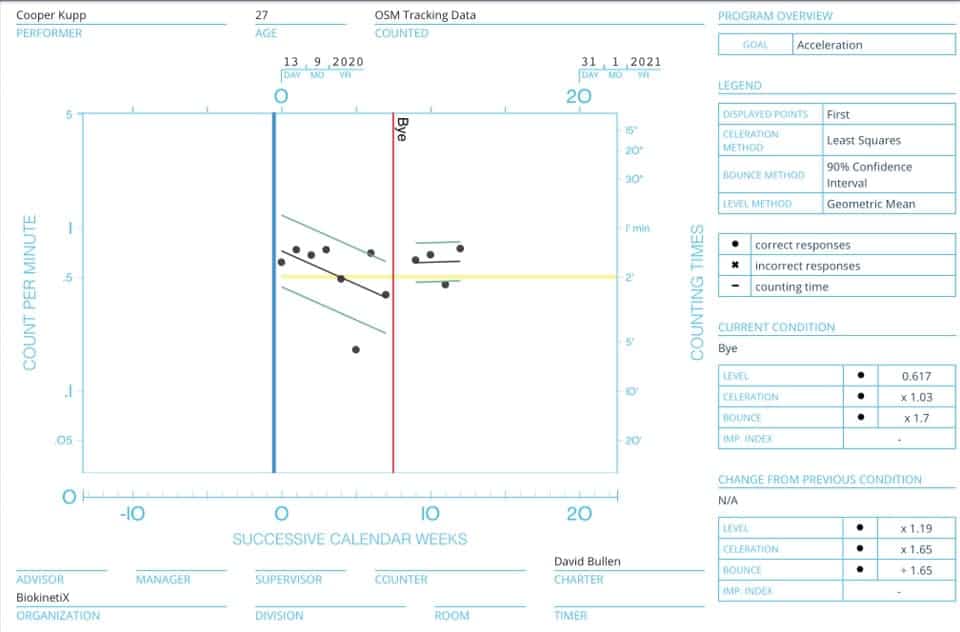 This season, Kupp’s OVM grades have been wildly inconsistent. While he has often surpassed 40 points, his overall grade suffers from some incredibly poor performances, most notably a grade of 10.72 in Week 6. That variance is largely due to dramatic differences in Kupp’s catch percentage, which ranges from a low of 33.3% to a high of 100%.

Fortunately, Kupp appears to have found some level of stability in recent weeks. Week 13 earned him his best grade of the season by a narrow margin. His catch percentage of 88.89% was his third-highest percentage of the season, and it was tied for sixth among qualifying wide receivers in Week 13. Kupp also averaged a solid 5.9 yards after the catch, 1.4 yards higher than expected.

After starting the season with five wins in six games, the Bears have done what everyone predicted they would: collapse. They haven’t won a game since mid-October, and I don’t think anyone would be particularly surprised if they lost their remaining four games as well. However, the team’s struggles don’t mean that individual players don’t occasionally have standout performances.

Like Michael Pittman Jr., Miller caught 100% of his targets. That is the primary reason he ranks so highly on our list. Miller also shared Pittman’s struggles with the ball in his hands. His 4.2 yards after the catch average is decent, but the NFL’s data shows that it was 1.1 yards lower than it should have been.

Despite the team’s difficulties, two Bears wide receivers make this week’s list. However, the factors resulting in their high grades were polar opposites. While Miller was hyper-efficient, Mooney only caught a relatively low 66.67% of his targets.

However, he averaged 12.2 yards after the catch, the third-highest average of Week 13. That number that was 2.8 yards higher than expected, a differential that ranked fourth among qualifying wide receivers. Mooney also ranked fourth with 4.7 yards of separation when targeted.

Last week, the OVM’s highest-graded wide receiver was Houston’s own Will Fuller. Unfortunately, with Fuller’s suspension, the Texans needed to turn elsewhere to find production. In Week 13, the primary benefactor of Fuller’s disappearance was Coutee, who qualified for his first OVM grade of the season.

Coutee caught 88.89% of his targets and averaged 4.3 yards of separation. Both of those numbers were tied with the aforementioned Kupp for sixth among qualifying wide receivers. Additionally, Coutee averaged 6.3 yards after the catch, which ranked seventh. Hopefully for Houston, he can maintain this level of play, at least until Fuller returns from his suspension next season.

The addition of Stefon Diggs to Buffalo’s offense is once again proving to be one of the offseason’s smartest moves. He has already broken 1,000 receiving yards, making him one of just six wide receivers to have reached that milestone so far this season.

In Week 13, Diggs caught 90.91% of his targets, tied for fourth among qualifying wide receivers. His other statistics were relatively unimpressive, but that alone was enough to earn him the seventh spot on our list.

Thomas has been one of the NFL’s best wide receivers over the last several seasons. His overall OVM grade ranked inside the top 10 in both 2018 and 2019. Unfortunately, thanks to injuries both to himself and quarterback Drew Brees, he has struggled in 2020.

However, in Week 13, Thomas showed signs of a return to form with his best grade of the season. He caught 81.82% of his targets, well above average, and averaged three yards of separation when targeted despite being given a relatively low five yards of cushion.

The Browns have a well-earned reputation as a run-heavy offense. However, it was their passing attack that allowed them to upset the Tennessee Titans in Week 13. Baker Mayfield targeted Landry more than any other receiver on Sunday, and Landry rewarded his quarterback’s trust in him with a highly efficient performance.

At a glance, Landry’s statistics follow a similar pattern to those of Michael Thomas, who ranks just above him on our list. However, Landry fares slightly worse on basically every factor the OVM measures. He caught 80% of his targets, and while he was able to create more separation than Thomas, at 3.2 yards on average, he was also given a more favorable 5.8 yards of cushion.

The Saints are starting Taysom Hill at quarterback, a player whose ability to competently fill that role have often been doubted. Fortunately,  the team’s wide receivers haven’t been slacking, with Sanders being the second of them to make our list in Week 13. Sanders’ box score statistics don’t look quite as impressive as his teammate Thomas’, but he was still highly effective in his more limited role.

Thomas outperformed Sanders on many advanced metrics. However, Sanders actually caught a slightly higher percentage of his targets than Thomas did, at 83.33%. As such, Sanders could actually be considered the more reliable target, even if Thomas was better overall.