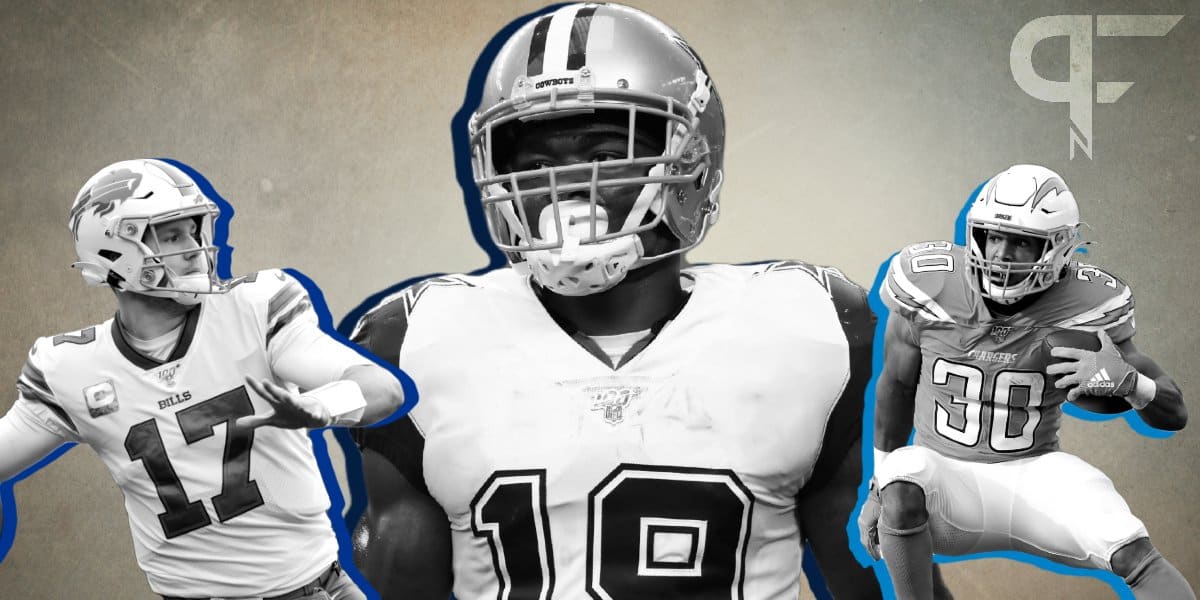 It is one thing to draft the players who explode during the fantasy football season. Managing to avoid potential pitfalls is a different story entirely. We all have our favorite players we look for in every round. However, it is almost just as important knowing who is likely to be a fantasy bust heading into your 2020 drafts.

Here are eight of the players I feel are most likely to bust given their ADP and will avoid drafting in most of my leagues this year.

If you read my recent article covering seven of the most overvalued players of 2020, this should be no surprise. I feel that selecting Josh Allen at QB7 is taking him at his ceiling. There are just too many questions and concerns for me to feel comfortable clicking the draft button when on the clock.

I am worried that his completion percentage of 58.8% will not be enough to make up the addition of a wide receiver of Stefon Diggs’ caliber. Another worry of mine is we could see a dip in his touchdowns and especially rushing attempts inside the red zone. Typically, 17 rushing touchdowns over two years would be something we covet in fantasy.

I worry, however, that rookie Zack Moss will be a detriment to the rushing upside Allen brings to your team. Not to mention if Devin Singletary stays healthy and continues to show the ability we saw on the field in 2019.

Allen sits firmly as my top quarterback who I believe busts in 2020, given the draft capital it takes to acquire him.

When drafting Aaron Rodgers, you need to remember this is no longer the elite fantasy option of years past. While he did finish 10th in points per game in 2019, Rodgers is a borderline starter in 2020. He only scored 20 fantasy points or more five times in 2019, and this offseason was not kind to his 2020 prospects.

First, the Green Bay Packers chose not to add any help in the draft at the wide receiver position and instead added QB Jordan Love from Utah State and RB AJ Dillon from Boston College at the skill positions. A backup quarterback and backup running back to a guy who just scored 19 touchdowns were more critical in their eyes. Longtime offensive tackle Bryan Bulaga is now on the Los Angeles Chargers, and his main receiver acquisition in Devin Funchess opted out for the 2020 season.

Given the depth of the quarterback position this year, I don’t see the upside with Rodgers when there are players such as Carson Wentz or Matthew Stafford who are going directly behind him in drafts.

It feels slightly odd putting a workhorse style running back coming off 100 targets from the previous season in the fantasy busts column, but here we are. When I look at Leonard Fournette, I have to look at which player we are getting in 2020. Are we drafting the player who just had 76 receptions in 2019, or are we getting the player who had 74 career targets over his first two seasons? I lean the latter of the two options.

The 2019 season seems like it was the perfect storm for Fournette. His primary competition for touches in T.J. Yeldon went to the Buffalo Bills in the offseason after rushing 104 times and receiving 78 targets. Along with the departure of Carlos Hyde, there was no one else in the backfield to compete against for touches. Another big help was the switch to Gardner Minshew at quarterback. During Minshew’s final season at Washington State, he targeted his running backs 140 times in just 13 games.

Entering 2020, the Jacksonville Jaguars have a new offensive coordinator in Jay Gruden, who brought with him, Chris Thompson. I am not saying that Thompson is going to lead the team in touches. I think that the combination of him and a team who is likely to be in negative games scripts all season will lead to a drop in Fournette’s value by the time the season ends and that he will end up on several postseason bust lists.

On a side note, check your waiver wires for RB Devine Ozigbo. He was one of my biggest Combine snubs coming out of Nebraska and was lost on the depth chart last year. He could end up being a sneaky add in dynasty leagues. My 100% exposure in 2019 might have been a year too early, at least that’s what I hope.

Finishing as RB6 in 0.5 PPR formats in 2019, Austin Ekeler will not repeat his numbers in 2020. While the loss of Melvin Gordon should, in theory, open up Ekeler into the workhorse back, I am worried the combination of Joshua Kelley and Justin Jackson will lead to frustration.

I am confident in Ekeler getting the passing down work, but even that will come at a reduced amount. Both Tyrod Taylor or Justin Herbert, whoever is starting, won’t check down anywhere close to the Philip Rivers 31.8% running back target rate of 2019. We can’t forget that both Taylor and Herbert are very comfortable using their mobility and picking up yards on the ground. I don’t believe that Ekeler will receive the expected volume, and as a result, will be a 2020 fantasy bust at his ADP. He won’t tank your team, but there are likely better options.

Stefon Diggs a fantasy bust for 2020?

After everything I said earlier about Josh Allen, Diggs was a lock to make it on the fantasy bust list for 2020. Calling Diggs a bust has everything to do with his new scenery than it does with his skills as he is one of the best technicians in the NFL.

Diggs is going from Kirk Cousins, who completed 43% of his deep ball passes (20 yards or more) to Allen, who’s adjusted completion of 30.9% ranked 29th, behind only Kyle Allen (29.6% on 54 attempts) and Dwayne Haskins (29.6% on 27 attempts). Of the 23 quarterbacks that threw 50 or more attempts, Allen is #22 on that list. If a wide receiver will not see catchable passes, why select them?

Going after Diggs is a plethora of receivers who I would happily take over him in 2020. Guys like DJ Chark, Terry McLaurin, Jarvis Landry, or even Michael Gallup are all going after Diggs. I don’t believe he goes over 1,000 yards receiving and comes in as my 30th-ranked WR in 0.5 PPR formats.

The term that I will use to call DeAndre Hopkins to be a fantasy bust in 2020 is bold. I am not saying that Hopkins will be an awful receiver whatsoever. I am in the camp that he isn’t going to return his first-round value, and if your first pick in your draft doesn’t do that, you could be in trouble.

My first concern is the type of offseason we have had. Whether it is rookies new to the league or veterans going to new organizations, they haven’t had the typical offseason to develop chemistry. My second and most significant concern comes from the drop he will see in targets. While I think the Arizona Cardinals will run close to 68 plays per game, he has a group around him who can stay relatively healthy, which he never saw in Houston.

Traditionally hovering anywhere from 27% to above 30% target share, I see this dropping to the 23% range. Hopkins getting 135 targets seems much more in the realm of possibility. Looking back on Hopkins’s career, the last time he saw a number close to this was 2014 when he received 127 targets and finished as the WR14 in PPR scoring.

I don’t understand why Amari Cooper is being drafted as the WR9 in fantasy drafts right now. Why are we drafting a player in the second round whose team just added the best wide receiver prospect we have seen in several years and spent as many weeks as a WR4 as he did a WR1? I don’t get it.

I don’t even think that Cooper is the WR1 on his team, let alone should he be in that spot for your fantasy team. Is he a great route runner and NFL player? Yes. However, that doesn’t mean he will be great for your fantasy team. Draft anyone you’d like between Odell Beckham Jr., D.J. Moore, or Allen Robinson before taking Cooper. While we are at it, take Gallup, who is going nearly four rounds later. If you don’t believe me that Cooper is a fantasy bust for 2020, ask the guy in your league who had him in 2019 and see how he felt about him.

Tyler Higbee had one of the most impressive and dominant stretches of games we have seen in recent years. From Weeks 11 through 15, he had 43 catches on 53 targets for 522 yards and 2 touchdowns, including four straight weeks of 100 or more yards receiving. The issue is from Week 1 through 10, Higbee had only 26 receptions on 33 targets for 212 yards and one touchdown while never going over 47 yards in a single game. His 734 receiving yards in 2019 were more than his first three years in the NFL combined with 60 yards to spare.

What changed was the loss of Gerald Everett and the Los Angeles Rams going to more 12 personnel, something they will continue in 2020. If I miss out on one of the elite tight ends in 2020 drafts, I am waiting rather than grabbing a middle-tier player. Instead, I would take the shot on Jonnu Smith or Hayden Hurst rather than betting on Higbee to live up to his 2019 expectations. It wouldn’t surprise me if Everett outscored him in 2020. His ADP of TE30 seems like the much better option to me heading into drafts. Higbee is my most likely tight end to be a fantasy bust in 2020.

Be sure to follow us on Twitter: @PFN365 and @PFNDynasty to stay up to date with all things around the NFL and the 2020 fantasy football season. Also, continue to visit Pro Football Network for NFL news and in-depth analysis while also visiting our Fantasy Football section for more coverage and up-to-date rankings.