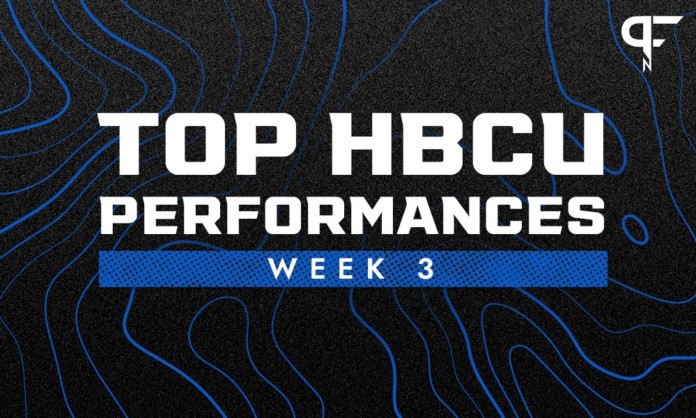 What were the top five HBCU performances from the Week 3 college football slate? Alabama A&M vs. Bethune-Cookman offers intriguing options.

Week 3 of the college football season offered yet another appetizing plate of HBCU football. With teams such as Norfolk State, Chowan, and Shaw running up the scoreboard, there were too many outstanding performances from HBCUs to make a top-five list. As a result, there are an additional 15 honorable mentions!

Alabama A&M vs. Bethune-Cookman was one of the best HBCU games heading into the Week 3 slate, and the performances generated did not disappoint.

Bethune-Cookman gave the reigning SWAC champions a run for their money, but in the end, Alabama A&M reigned victorious, 30-27. The Thursday night matchup began with a lengthy weather delay, but once the action began, it never stopped. The heavy rain resulted in a more run-heavy approach from both teams.

Alabama A&M’s Gary Quarles was the SWAC Offensive Player of the Week after rushing 27 times for 101 yards and a plunge into the end zone, adding another 46 yards on 3 receptions. Yet, the better rusher was on the other sideline. Bethune-Cookman’s Que’Shaun Byrd gained 132 yards and 2 touchdowns on 21 attempts. He looked shifty in space and jetted through every hole.

Defensively, Bulldogs safety Trenell Troutman had himself a night. He accumulated a team-leading 9 tackles (1.5 for loss), 2 interceptions, and 1 QB hit. The Louisville transfer packs a punch and is stellar tackling in the open field.

Were it not for the weather, we likely would have seen these two teams combine for well over 60 points. Aqeel Glass is one of the best FCS signal-callers and has the best FCS receiving corps at his disposal — “The Outlaws.” Although the passing game was quieter than usual, Glass connected with Abdul-Fatai Ibrahim for a pair of TDs, one of which was a beautiful display of concentration and body control as he got both feet down in the back of the end zone to end the first half.

😳 Heck of a TD catch for Abdul-Fatai Ibrahim.

UL-Monroe is far from an FBS powerhouse, considering they finished 0-10 last year. Still, they are an FBS program under a new head coach with some talent on defense. Losing 12-7 in a defensive stalemate is far from a bad loss. Jackson State held ULM to 3.3 yards per play and 250 total yards of offense. In fact, the Tigers accumulated more yards (285) and yards per play (4.8) than the Warhawks.

A key reason for the defense’s success was — once again — due to the play of linebackers Aubrey Miller Jr. and Keonte Hampton. Miller racked up the most tackles among all HBCU players in Week 3 with 16 (2 for loss). For good measure, he added a QB hit, while Hampton pitched in 7 tackles (1 for loss), 1 sack, and another QB hit.

Edge rusher Nyles Gaddy’s stat sheet (6 tackles, 1 sack) doesn’t seem impressive, but he generated constant pressure, making life easier for the rest of the defense. Additionally, CB De’Jahn Warren built on his stellar spring campaign, allowing just 1 catch on the day while playing the most defensive snaps on the team.

Who do I not list for the Spartans? Fresh off two road losses to Power Five competition, Norfolk State returned home and molly whopped D2 Elizabeth City State, 63-26.

The accolades don’t end there, as DL Chris Myers’ 2-sack performance netted MEAC Defensive Player of the Week. In fact, six other Norfolk State defenders recorded at least a half-sack. Let’s just say the Vikings got on their ship and won’t be exploring new land for a while.

Although Florida A&M lost to in-state FBS opponent USF, Markquese Bell and Xavier Smith did all they could to carry the Rattlers. Bell is a legitimate NFL Draft prospect that boosted his stock with his play against the Bulls. He led both teams with 15 total tackles while pitching in 1 tackle for loss, 1 sack, and 1 forced fumble.

The 6’3″, 205-pound safety showcased his versatility by taking snaps on the defensive line, in the box, in the slot, and at deep safety. For his efforts, Bell was named the Reese’s Senior Bowl and SWAC Defensive Player of the Week.

Not a matter of if FAMU Safety Markquese Bell will be drafted, but how high. Another standout performance against FBS non-conference competition on tape @DraftHBCU #DraftHBCUPlayers 🏈 pic.twitter.com/5qSifhQeNz

Offensively, QB Rasean McKay looked Smith’s way early and often. The star wideout caught a whopping 15 passes for 139 yards. Sure, he didn’t find the end zone. But he regularly picked up first downs and yards after the catch. Smith is a draft prospect himself and should hear his name called in April if he keeps performing at this level.

Chowan is a private D2 university in Murfreesboro, North Carolina. It is okay if you have not heard about it. But allow me to let you in on a secret — they are good at football. They went 3-0 against non-conference opponents to begin the year and will face a rigorous all-conference schedule starting in Week 4. Nevertheless, they trounced Erskine in Week 3, 49-19.

QB Bryce Witt completed 22 of 33 passes for 405 yards and his second career 7-touchdown game. WR Imeek Watkins came down with 4 of those scores, gaining 64 yards on 5 receptions. But the biggest chain-mover was WR Laurence King, who hauled in 9 passes for 162 yards and 1 TD. RB Tyrek McNeil took his 12 carries for 83 yards and was the third-leading receiver with 59 yards on 4 catches.

Which HBCU performances missed our top five but are worthy of an honorable mention for Week 3?