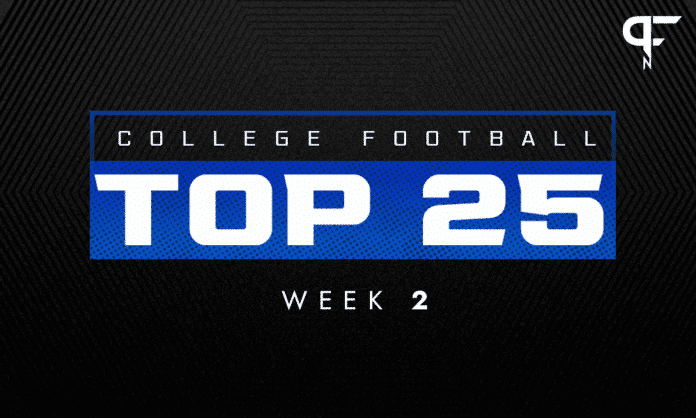 The 2021 college football season gave us plenty of unexpected outcomes in Week 2! With the second full CFB weekend now in the books, let’s take a look at our updated FBS top 25 college football rankings. Who’s up, who’s down, who’s new, and who’s out?

Which teams make up the top five of our FBS top 25 college football rankings heading into Week 2?

The top team in our FBS top 25 college football rankings remains the same for another week. Alabama conducted a 48-14 rout of Mercer in Week 2, safely securing their spot at the height of the pantheon.

Some thought that maybe the Georgia Bulldogs were on upset alert after losing JT Daniels for their Week 2 matchup against UAB. Those people forgot two things: Georgia’s defense is elite, and Stetson Bennett exists. His name may sound like that of a Revolutionary War general, but Bennett was very much a contemporary brigadier on Saturday, throwing for 288 yards and 5 touchdowns on just 10 completions.

The top three teams in our latest FBS top 25 college football rankings remain static, as they won their Week 2 matchups by a combined score of 180-21. Oklahoma laid down a devastating 76-0 shutout on Western Carolina. Spencer Rattler was 20 of 26 for 243 yards and 5 touchdowns. It’s safe to say the Sooners recovered well from Week 1 against Tulane.

The move up one spot for the Aggies is purely procedural, as Ohio State fell below them. The Aggies barely edged out the Colorado Buffaloes on Saturday, winning 10-7 in a defensive slugfest. It didn’t help that the Aggies lost starting quarterback Haynes King early to a leg injury, however. Plus, Karl Dorrell has proven he can coach his team up.

Like the Aggies, the Tigers receive a one-spot boost by virtue of Ohio State’s fall. The Tigers did take care of business in Week 2, nonetheless, by beating South Carolina State by a score of 49-3. The defense was once again suffocating, and the offense appeared a bit more in sync after a brutal season opener against Georgia.

Who is sniffing a spot in the top five?

The Ducks were given a slight demotion after closely edging out Fresno State in Week 1. That was a shaky win, but their Week 2 victory wasn’t. Oregon faced Ohio State in Columbus — without defensive stars Kayvon Thibodeaux and Justin Flowe — and still came away with a 35-28 win. The defense has proven to be talented even beyond its stars, and if Anthony Brown can keep improving, big things could be in store.

Oregon is a talented team; let’s not get that confused. A loss to the Ducks is a good loss on the résumé. Nevertheless, it’s a loss that feels like it could have been avoided. Ohio State has more offensive firepower, but their play-calling strategy was suspect at times. And on defense, the Buckeyes were extremely underwhelming at all three levels. Transfer linebacker Palaie Gaoteote should help, but the Buckeyes can’t afford to lose in Big Ten play.

While other teams rise and fall around them in our FBS top 25 college football rankings, the Bearcats just keep cruising in the top 10. They haven’t really played anyone yet, but at the same time, they’re doing what they should do against teams like Miami (Ohio) and Murray State. However, the honeymoon period is over, and next week, they have Indiana. After that, they have Notre Dame.

If Matt Corral plays this well throughout the entire season, there might not be a more explosive offense in college football. The weapons corps is still flush with playmakers after losing Elijah Moore, and Lane Kiffin is a mad genius. Tack in the success on the defensive side with players like Sam Williams and A.J. Finley, and the Rebels could give Alabama a fight in October.

The Iowa Hawkeyes have opened up their season with double-digit wins against Indiana and Iowa State, both of whom were in the top 15 at the time of the matchup. Even if the offense isn’t yet elite, Spencer Petras has shown some modest improvement, and Tyler Goodson is a bonafide playmaker. More than anything, though, Iowa’s defense is a game-breaking unit, and it’s the engine behind their ascent.

Arizona State is a sleeper in our FBS top 25 college football rankings. They’ve only played Southern Utah and UNLV, but they have 78 points for and just 24 points against. The roster is solid all around, and quarterback Jayden Daniels has the physical tools to elevate the Sun Devils ahead of Pac-12 opponents. The next few weeks will be telling for this squad.

Boston College met expectations with a 45-28 victory against UMass in Week 2, but a wrist injury suffered by Phil Jurkovec could complicate matters in the coming weeks. Luckily, Boston College has a game against an ailing Temple unit in Week 3. However, a game against Missouri in Week 4 won’t be so forgiving. Getting through this adversity is key for the Eagles to stick around.

Jason Bean gave the Chanticleers a fight on Friday night, but it wasn’t nearly enough for Kansas to vault the Jayhawks over Coastal Carolina. Instead, Coastal did what Big 12 teams do to Kansas and beat them 49-22. The Chanticleers have a legitimately talented roster, and their quarterback Grayson McCall has legitimate high-level traits. They’re not going away anytime soon.

UCLA didn’t play this week, and yet, they moved up three spots — courtesy of teams like USC, Iowa State, and Texas falling down the board. The Pac-12 may be tougher than originally expected, but the Bruins are equipped to compete. They have talent on offense and defense, and their offensive line in particular is a smothering unit that can dominate the point of attack.

Perhaps Notre Dame’s win against Florida State in Week 1 doesn’t mean as much now that FSU lost to Jacksonville State. Additionally, the Fighting Irish didn’t attract much excitement with their close 32-29 win over MAC opponent Toledo. We’re not moving the Fighting Irish down just yet, but they may be trending toward pretender status.

Who rounds out the rest of our FBS top 25 college football rankings?

Texas is still talented — that hasn’t changed. But they’ve reverted to the “not back” category after losing a lopsided 40-21 affair against Arkansas. On one hand, Sam Pittman does have more experience in his current role than Steve Sarkisian, so these early lumps can be expected. But Texas let Arkansas run all over them. They’ll need more consistency in Big 12 play.

A lot of my Week 2 predictions fell through — including this one. I expected Stanford to be a relatively easy out for USC. Instead, Clay Helton’s squad lost by 2 touchdowns. And heading into the fourth quarter, they were down 35-13. Kedon Slovis wasn’t as sharp in this one, and Stanford clearly put a better product on the field. The pressure has to be ramping up for Helton, who hasn’t sustained success at this point.

North Carolina looked more in sync in their Week 2 matchup against Georgia State. Granted, that’s expected against such an opponent. Still, Sam Howell was more comfortable within his system, and it showed. He put up 352 yards and 3 touchdowns while completing 21 of 29 attempts. It’s not enough to move them up in our FBS top 25 college football rankings, but it’s enough to keep them steady.

Florida is a team worthy of a spot in our FBS top 25 college football rankings. That much is clear now. There’s still a good amount of firepower on offense, and the defense is stacked with talent, led by playmaking cornerback Kaiir Elam. The question remains at quarterback. Emory Jones has talent, but his interceptions are all low-quality throws that involve lacking recognition. That QB uncertainty might keep the Gators from going further.

Credit where credit is due: Jim Harbaugh has kicked off the 2021 season on an extremely high note. In Week 1, the Wolverines dominated the Western Michigan Broncos. And in Week 2, they did the same thing to the Washington Huskies, who had started the season inside our FBS top 25 college football rankings. Michigan obliterated Washington in the trenches on both sides of the ball. That’s a sustainable method of success.

I was willing to give Miami the benefit of the doubt against Alabama, because — you know — Alabama is really good. Then Miami almost lost to Appalachian State in Week 2. Appalachian State should be one of the better teams in its conference, but this is the kind of game that shouldn’t be so close for the Hurricanes. Again, they have talent, but their performance keeps pushing them down the board.

Penn State holds strong at the 22nd spot after a routine 44-13 win over Ball State. The Nittany Lions have a ton of talent on defense, and that’s clearly their strongest area. But offensively, they were largely efficient in Week 2. Time will tell if that can carry over to conference play, but few Big Ten defenses look particularly imposing right now.

For a while, it didn’t look so good for TCU in Week 2. The Horned Frogs were down 19-14 at the half against the Cal Golden Bears but managed to pull out a victory in the end. Max Duggan rebounded from early mistakes, and Zach Evans tore apart the Golden Bears on the ground. Cal gave Nevada, a similarly ranked team, a fight in Week 1, so the Horned Frogs should have expected resistance. They responded to it well.

Virginia Tech’s defense continues to dominate any and all opposition it faces. Between Sam Howell and Bailey Hockman, no quarterback is safe. The Hokies are clearly a defensive team first, but they have enough on offense to stay competitive. Braxton Burmeister’s health will be of interest after he exited the game against Mid Tennessee State, but early reports are promising on that front.

The 25th spot in our FBS top 25 college football rankings has become a nexus for teams on the rise, and this week that team is Kentucky. The Wildcats brought down the apocalypse against UL Monroe in Week 1, then turned around and beat a talented Missouri team in Week 2. Missouri was an important test for quarterback Will Levis, who hadn’t faced a secondary with that kind of talent yet. He passed, and Kentucky keeps trending up.