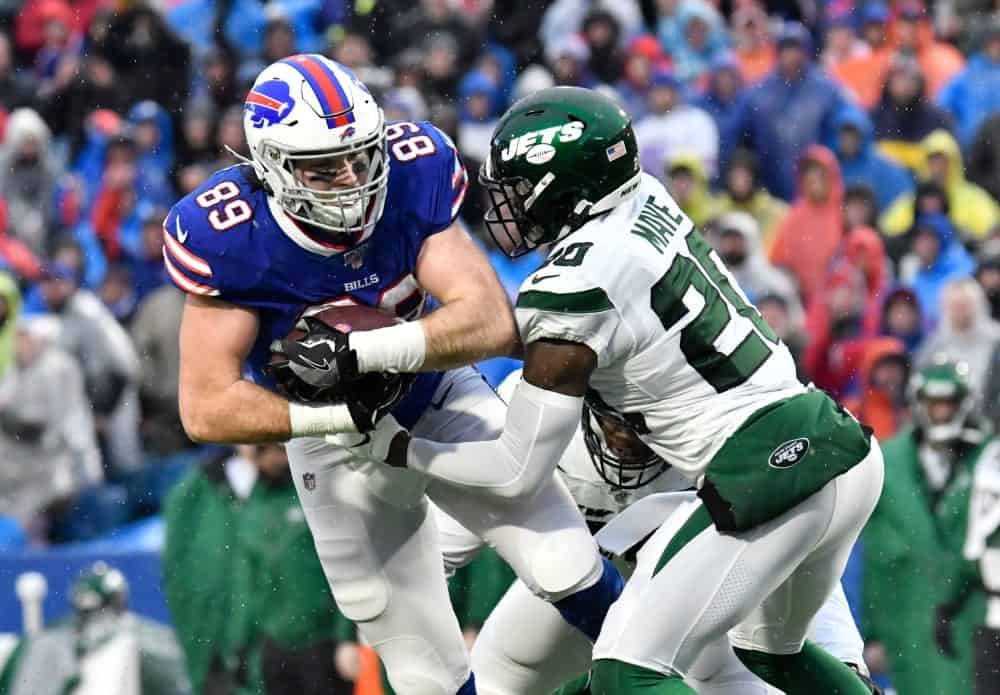 The 2019 regular season of the National Football League has come to a close. The 12 playoff teams, from their respective conferences, have been set and the road to the Lombardi trophy kicks off with the Buffalo Bills facing off against the Houston Texans. Making their second postseason appearance in three years under head coach Sean McDermott, Buffalo was treated to an intriguing performance during Tommy Sweeney’s Week 17 emergence.

A 2019 seventh-round pick and second tight end selected by Buffalo, Sweeney showed out with an impressive performance as a receiver after contributing mostly in the blocking scheme during his rookie season. According to Pro Football Network’s Offensive Share Metric, Sweeney was the highest-rated tight end with an OSM grade of 51.16. He set career highs with 76 yards receiving and five receptions. Sweeney also caught every pass thrown his way in the Bills loss to the New York Jets.

What’s even more head-scratching is that this performance came out of nowhere. Sweeney has only caught passes in one other game this season. That game was week 1 win against the New York Jets. Way back then, Sweeney caught two passes for 35 yards. Buffalo quarterback Josh Allen has only targeted him seven times between Week 1 and Week 16.

I know what you’re thinking, why was his performance so crucial to the success of the Bills offense with just a good day in the box score? Fear not, using the NFL’s Next Gen Stats (NGS), we will see why Sweeney’s Week 17 performance constituted an elite OSM grade.

The Buffalo Bills rookie tight end set a career record for his highest OSM grade and had the 8th best performance of the season for a tight end with his 51.16 against the New York Jets. One major factor leading to that grade was Sweeney’s ability to create separation.

According to the NFL’s NGS, Sweeney found, on average, 4.3 yards of separation on each of his targets, the second-best average among TEs in Week 17. On top of that, had one of the closest cushions averaging 3.6 yards between himself and the defender on each target, the sixth-lowest among pass-catchers in Week 17.

With this breakout game, could the Bills ride their rookie tight end’s hot performance into their Wild Card Weekend showdown with QB Deshaun Watson and the Texans? Sweeney’s 76 receiving yards doubled his season total and, in the process, leapfrogged five other Bills players in season receiving yards. In Week 1, there was some talk about the possibility of Sweeney seizing the opportunity to impress the coaching staff with fellow TE Tyler Kroft out recovering from foot surgery.

One reason for the uptick in targets to Sweeney was the Buffalo Bills’ decision to sit their other rookie TE Dawson Knox. Clinching a wild card playoff berth in their week 15 win over the Pittsburgh Steelers, the Bills preserved the health of quite a few starters in Week 17 with rookie running back Devin Singletary and wide receivers John Brown and Cole Beasley joining Knox on the bench versus the Jets. Buffalo would also pull starting QB Allen after the Bills’ second drive and insert Matt Barkley, who was responsible for all of Sweeney’s targets.

While Buffalo’s offense deployed their second-string, New York was full strength, minus injuries, and was a stingy defense when it came to opposing TEs. According to Yahoo’s fantasy football research, the Jets’ defense gave up the third-fewest points to tight ends this season (standard scoring). Even though the Bills offense struggled as a whole, Sweeney’s performance is promising heading into the postseason.

Sweeney was able to excel with a second-string quarterback and no starting-quality threat in the receiving game facing a defense that has defended the tight end position well all season. It is extremely plausible to think that with his starting quarterback and offensive weapons back in the lineup, Sweeney could find his separation again and be an under the radar threat for Buffalo this postseason.

The NFL is all about chances and faced with an opportunity to earn some reps the seventh-round pick seized his chance and made the most of it. Seeking their first playoff victory since Buffalo’s 37-22 win over the Miami Dolphins during the 1990 AFC wildcard round, the Bills will need all the help they can get to beat a Houston team that, while inconsistent at times, can flip a switch at any moment offensively.

Facing the biggest game of his young career, Allen will have quite the day ahead of him. He’ll be facing a Houston pass rush that includes J.J. Watt returning from injury. Expect Allen to look to Knox in the seam as a safety blanket when under duress.

However, with that in mind, McDermott should ponder the idea of throwing Sweeney in that same seam route. He is less likely to draw as much attention due to his low receiving numbers and should thrive with his success in the seam during Week 17. Either way, keep an eye on the pair of rookie tight ends during this wild card weekend.