Tom Brady rebounds in dominating fashion vs. Miami in Week 5

Buccaneers QB Tom Brady was stellar on Sunday. How does Brady's most recent game compare to the rest of his time in Tampa Bay?

By Lucas Ellinas
October 14, 2021
What's in this article? Click to show
Tom Brady’s box score statistics were spectacular on Sunday
The advanced metrics also reflected positively on the Buccaneers QB
The advanced metrics behind Brady’s excellent grade last week
Comparing Brady’s weekly grades from 2020
Can he keep his momentum against the Philadelphia Eagles?

On Sunday against the Miami Dolphins, Tom Brady had one of the most productive games of his entire career. Let’s examine his advanced metrics to see how this performance stacks up to his other games as Tampa Bay Buccaneers QB.

Purely looking at his box score statistics, Brady had one of the better games you’ll see from a quarterback. He threw for 411 yards and 5 touchdowns, and he did it without Rob Gronkowski, who had been playing well before his injury.

It is a performance that seemed impossible just a few short years ago and only serves as more evidence that the divorce from New England was good for Brady.

The advanced metrics also reflected positively on the Buccaneers QB

You might wonder how much stock we can really put in Brady’s performance since it came against a Dolphins team that looks to be on the verge of total collapse. Fortunately, we can turn to the advanced metrics, which, in this case, confirm what the traditional statistics tell us.

As evidence, let’s turn to the Offensive Value Metric (OVM). The OVM is a grading system created by the (Bx) Movement to evaluate players based on how much they contribute to the creation of their statistics, rather than the statistics themselves.

Going into Week 5, Brady’s OVM grades were consistently falling each week of the season, starting at 27.63 in Week 1 and steadily dropping to 19.71 in Week 4.

Against the Dolphins, however, Brady earned a grade of 33.95. That was the seventh-highest grade among all quarterbacks in Week 5 and Brady’s best score so far this season.

Not only does that grade imply that Brady was exceptionally productive on Sunday, but he was also a more efficient quarterback than he had been at any other time this season.

To explain why Brady’s grade in Week 5 was so impressive, we need to examine the advanced metrics involved in calculating it and compare them to his performances earlier in the year.

Despite airing it out, he still completed 73.2% of his pass attempts, the fifth-highest percentage of the week and Brady’s second-highest of the season. According to the NFL’s projections, that number was 7.8% higher than expected (eighth-best on the week). It was Brady’s best mark of 2021 by more than 3%.

Sure, there have been other weeks this season in which Brady performed better in certain areas than he did on Sunday. However, Week 5 was the only game in which he performed well in every facet.

To help us determine whether Brady’s Week 5 grade is a sign of more to come, let’s look back at his 2020 grades for some context.

In the chart below, you can see Brady’s weekly grades from last season, marked by the black dots. For comparison, the regular-season grade on average for quarterbacks in 2020 is represented by the yellow line. 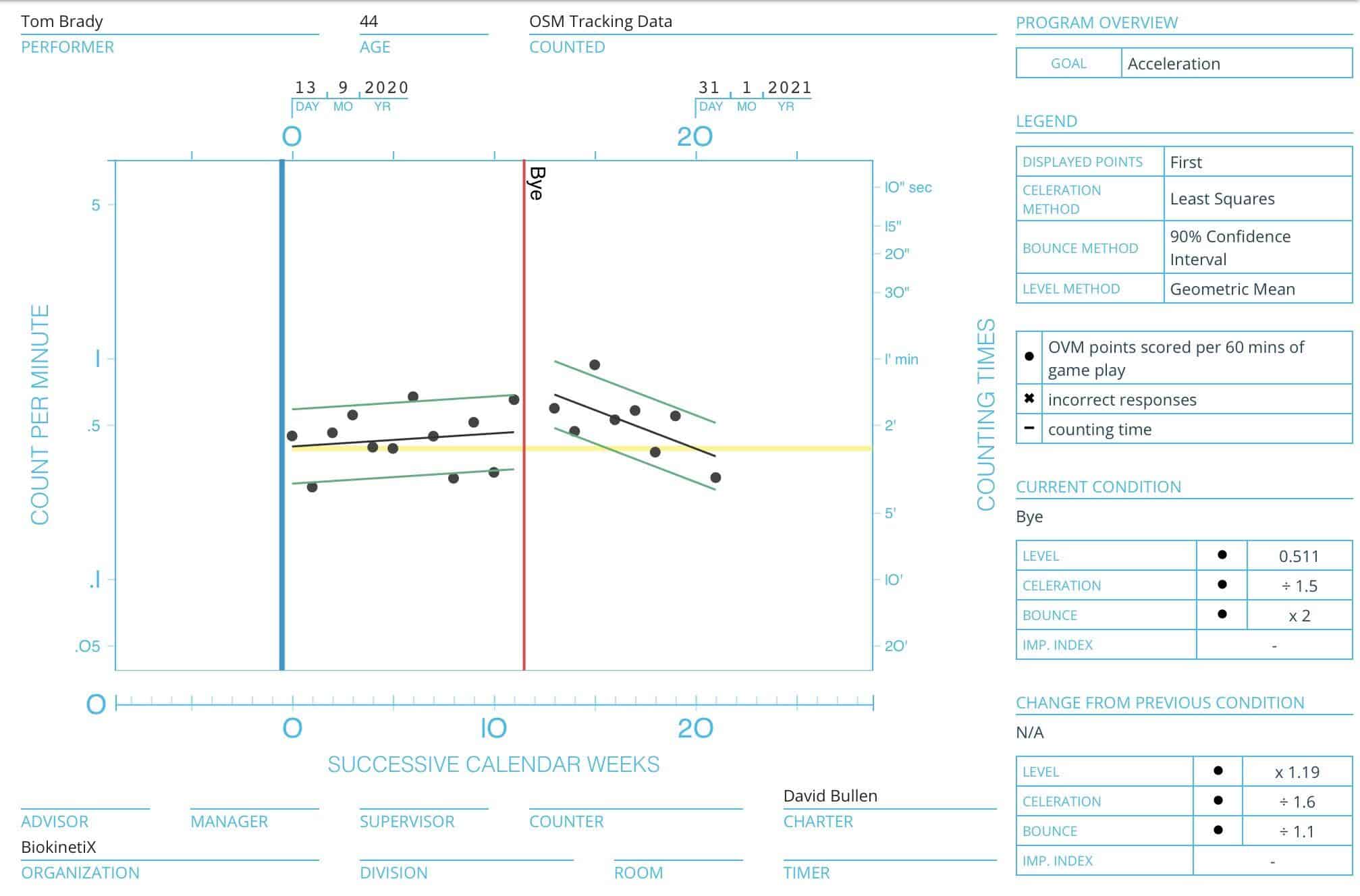 As you can see, Brady was fairly inconsistent. While many of his grades were above the league average, they covered a wide range. He had multiple grades below 20 points, though none below 10.

Interestingly, there doesn’t appear to be any particular pattern. Brady didn’t have long stretches of low or high grades, which has interesting implications. On the one hand, it does mean his performance on Sunday won’t necessarily translate into the next few weeks. On the other hand, it indicates that his early-season trend likely wasn’t a sign of any sort of overall regression.

Can he keep his momentum against the Philadelphia Eagles?

Despite his staggering success on Sunday, Brady might not see the same explosive numbers on Thursday Night Football against the Eagles. Philadelphia’s defense has yet to allow a 300-yard passer but has also failed to allow fewer than 100 yards rushing in a game. It would make sense for Tampa Bay to adopt a more run-focused strategy.

Of course, a quarterback can still earn a high OVM grade without exceptional box score statistics. We’ll see if Brady can continue to lead his team to efficient success.