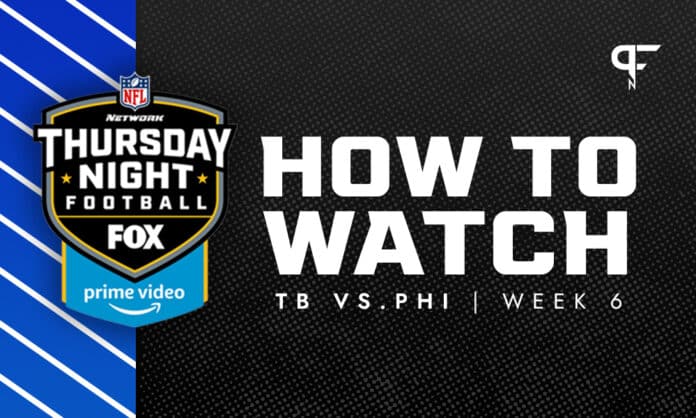 Thursday Night Football Tonight Week 6: What channel is the Buccaneers vs. Eagles game on?

Who's on TV in Week 6? Here's the channel and live stream information for the Buccaneers vs. Eagles on Thursday Night Football tonight.

Which teams face off on Thursday Night Football tonight in Week 6? Quarterback Tom Brady and the Tampa Bay Buccaneers (4-1) head to the City of Brotherly Love to take on the Philadelphia Eagles (2-3). Both franchises come into this game after big wins, but who has the edge tonight? Here’s the live streaming and channel information, as well as a preview and prediction for Thursday Night Football.

What channel is Thursday Night Football on tonight?

What to expect from tonight’s Buccaneers vs. Eagles game?

The Buccaneers look to extend their win streak to three games while the Eagles attempt to start their own on Thursday Night Football tonight. However, given how Philadelphia’s offense has struggled this season, it is hard to see how they can keep up with Brady and Tampa Bay’s offense.

Signs of life in Philly?

Philadelphia’s defensive front is having a great season. Defensive end Derek Barnett and defensive tackle Fletcher Cox have been on the front lines of this defense for several years. However, the recent additions of DT Javon Hargrave and DE Josh Sweat have rounded things out nicely. But the Eagles’ secondary is still struggling. Holding a hot Panthers team to 18 points is nice, but some of the other high-octane offenses in the NFL have had no issues outpacing Philadelphia.

Tom Brady is on fire

Speaking on needing to outpace an offense, Tampa Bay is on fire right now. They’ve scored 40+ points twice this season, including their 45-17 beatdown of the Miami Dolphins. Brady threw 5 touchdowns in a day to forget for South Florida. He’s doing it all right now. Heading into Thursday Night Football tonight, the future Hall of Famer has 15 TDs to just 2 interceptions.

The Bucs have some solid running backs in their stable between Leonard Fournette and Giovani Bernard. Bernard, the recipient of a 10-yard touchdown pass in Week 5, has started to develop some great chemistry with Brady. Pass-catching backs have always paired well with the veteran QB, and it’s nice to see Bernard getting his chance.

Tampa Bay’s defense continues to be a problem for most of their opponents week in and out. Philly is a streaky team. They were held to 6 points in the first half, then took over with a dominating come-from-behind performance in the second half. The Eagles’ offense can remain stagnant for periods, seeing no real ball movement.

If the Buccaneers show up in Philadelphia and play like they are supposed to on Thursday Night Football tonight, they can dominate. However, don’t expect the Eagles to make it easy. Philadelphia will pop a few plays here and there, but it won’t be enough in the end.