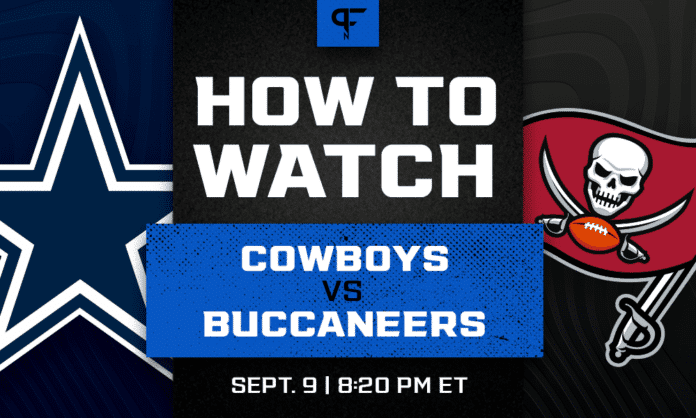 Who kicks the NFL regular season off on Thursday Night Football tonight? The Super Bowl LV champs, the Tampa Bay Buccaneers, host the Dallas Cowboys at Raymond James Stadium. What channel is the game on, and where can you live stream Thursday Night Football? With the season’s start quickly approaching, let’s preview the game and provide any information you need before the NFL’s Thursday Night kickoff game tonight.

Thursday Night Football Tonight | What to expect from Cowboys vs. Buccaneers?

Seven long months have passed since QB Tom Brady and the Buccaneers lifted the Lombardi Trophy, defeating the Kansas City Chiefs 31-9. With a new season starting, the Buccaneers look to maintain their success from last season. The Buccaneers earned a Wild Card berth with an 11-5 record last season.

However, Drew Brees’ retirement brings uncertainty to the NFC South division, one typically dominated by New Orleans the past four seasons. But make no mistake, the goal for Tampa is a repeat.

The return of Dak Prescott

For Dallas, Cowboys fans anxiously await franchise QB Dak Prescott’s return in tonight’s Thursday Night Football season opener. Prescott’s 2020 season came to a quick end despite a red-hot start. Through the first five weeks of the regular season, Prescott threw for 1,856 yards and 9 touchdowns. In Week 5, however, the QB suffered a broken ankle against the New York Giants and missed the rest of the season.

After two ankle surgeries in the offseason, Prescott was sidelined during camp due to a latissimus strain in his right shoulder. While Prescott has ensured he is ready to go for the season, Dallas faces another major issue.

Early in the week, “the [Cowboys] best player on the offense,” according to Cowboys RB Ezekiel Elliott, guard Zack Martin tested positive for COVID-19 and will not be available.

While missing Martin is a soul crusher for Dallas’ offensive line, it’s far from the only issue plaguing this unit. In late August, third-year guard Connor Williams was reinstated from the reserve/COVID-19 list — he should see a greater role with Martin out. Furthermore, offensive tackle La’el Collins has suffered from neck stingers since the beginning of August. With full participation at practice this week, Collins should be fine to get the start for Thursday Night Football tonight.

Can Dallas overcome the obstacles?

All eyes Thursday night will be on Dallas’ offense. Injuries hampered the unit last season and severely affected their success. While the Cowboys have improved the roster this offseason, they’re not in the same category as Tampa Bay. If Dallas wins, it will take quite a performance from Prescott.

Tampa’s defense is far too stout to let an undermanned Cowboys offensive line get the best of them. On the flip side, has Dallas done enough on the defensive side of the football to slow down a Tampa offense that averaged 30.8 points per game last season? It doesn’t seem too promising after the Cowboys allowed almost 30 points per game last season.

Tampa should win comfortably in tonight’s opening game of the NFL season. Meanwhile, Cowboys fans will most likely need to wait until Week 2 to see Dallas’ true offensive form.