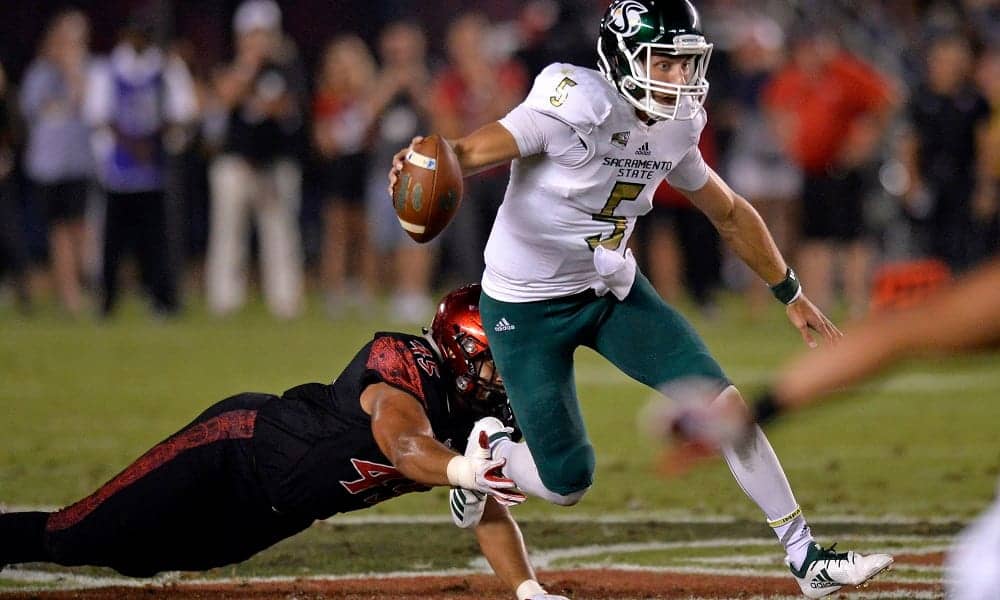 Since the end of the 2019 College Football season, there have been a number of high profile players enter the transfer portal. With a history of players parlaying a transfer into an improved NFL Draft stock, I take a look at three 2020 quarterback transfers whose stock could be impacted by their landing spot.

The NCAA transfer portal has been extremely kind to quarterbacks in recent times. Two years ago, Joe Burrow was a new face on campus at LSU. Faced with a season sat behind Dwayne Haskins at Ohio State, Burrow entered the portal as a graduate transfer and made his way to Baton Rouge. After a less than spectacular first season with the Tigers, Burrow burst into life in 2019 as part of an explosive offense that delivered LSU their first national championship since 2007.

Burrow is the latest in a line of successful transfer quarterbacks

Prior to 2019, Burrow was a late-round NFL Draft prospect at best. The landing spot couldn’t have been better for him to grow his stock exponentially. Offensive coordinator Joe Brady’s scheme at LSU allowed Burrow to thrive. It allowed him to showcase all the attributes that NFL general managers, head coaches, and scouts look for in a professional quarterback.

Burrow went from backup at Ohio State, to Heisman winner, national champion, and the first overall pick of the Cincinnati Bengals in the 2020 NFL Draft in the space of just two years.

Burrow was, of course, just the latest in a string of Heisman winning quarterback transfers to have their NFL Draft stock drastically improved by finding a new home.

Both Baker Mayfield and Kyler Murray flourished by transferring from Texas Tech and Texas A&M, respectively. Under the tutelage of Lincoln Riley at Oklahoma, both put up eye-watering numbers on their way to Heisman trophies and first overall selections in the 2018 and 2019 NFL Draft, respectively. More recently, Jalen Hurts’ season with the Sooners saw him taken in the second round of the 2020 NFL Draft by the Philadelphia Eagles.

There are several intriguing situations and scenarios for the 2020 quarterback transfers. Some of them are more obvious than others.

Former Wake Forest quarterback Jamie Newman has transferred into probably the most enviable situation in a Georgia Bulldogs’ program that is stacked with NFL-caliber talent and primed to make a run at the College Football Playoffs.

Georgia is in position to have a transfer quarterback start in back-to-back seasons, in the same way the Sooners did with Mayfield and Murray, after also landing USC transfer JT Daniels over the spring.

Former Houston Cougars quarterback D’Eriq King is one of the most exciting quarterback transfers for the 2020 season. King will hope to improve his NFL Draft stock at the same time as reviving the fortunes of the Miami Hurricanes.

King, Newman, and Daniels have all commanded media attention, but the following three 2020 quarterback transfers could all see their NFL Draft stock alter during the 2020 College Football season.

If you’re looking for a Burrow-esque rise up NFL draft boards from this group of 2020 quarterback transfers, then former Stanford slinger K.J. Costello could be your man.

After a 2018 season where he was named to the All-Pac-12 second-team, and he led the conference in yards per attempt (8.8), big things were expected of Costello in 2019.

Last season, however, turned into a nightmare for both player and program. Costello was beset by injuries and poor performance as the Cardinals limped to a 4-8 record. Of the five games he played, Costello failed to pass for over 200 yards in three, and against UCF he had a completion percentage of just 47.7%, his worst since 2017. His yards per attempt and touchdown to interception ratio were also the worst of his career.

Costello has a chance for redemption this coming season. He also has the best landing spot to improve his NFL Draft stock of all the 2020 quarterback transfers.

Mike Leach may not be Lincoln Riley, but the new Mississippi State head coach knows how to turn a transfer quarterback into an NFL player. In the last two seasons at Washington State, Leach has been responsible for transforming the careers of transfer quarterbacks Gardner Minshew and Anthony Gordon.

Leach has witnessed the trouble that Costello can cause a defense when he plays to his full potential. Costello put up 323 passing yards, four touchdowns, with a completion percentage of 79.1% when Stanford faced Washington State in 2018.

If Costello can replicate that 2018 form, in an offense that is going to sling the ball around in the SEC, then his NFL Draft stock will soar.

Jake Bentley is one of the more intriguing 2020 quarterback transfers. After a season-ending injury during the 2019 opener, the former South Carolina quarterback hit the transfer portal as a graduate transfer after losing the starting job to Ryan Hilinski.

Having been called into action as a freshman, Bentley went on to become one of the most successful quarterbacks in Gamecocks’ history. He guided them to a bowl game during that freshman campaign and back-to-back winning seasons in 2017 and 2018. He ranks fourth in South Carolina history for passing yards (7,527) and third for touchdowns (55).

Bentley’s stock may have been at its highest after he torched a fearsome Clemson defense to the tune of 510 yards and five touchdowns in 2018.

Despite this, the most recent memory of him on the field will be when he struggled in the opening day loss to North Carolina, finishing with 142 yards and two turnovers.

On the face of it, a transfer to a team that was dominant in the Pac-12 in 2019 would seem like a golden opportunity to increase his NFL Draft stock.

Could Bentley’s draft stock be harmed by his transfer to Utah?

There are two glaring issues, however, that could be detrimental to Bentley’s stock from his transfer to Utah.

First, the Utes have lost a lot of talent from the team that made a genuine push to be included in the College Football Playoffs for the most part of the 2019 season. Most of the defensive talent that allowed them to be so dominant has been lost to the NFL Draft. They have also lost the most potent offensive weapon in running back Zack Moss.

The good news for Bentley is that for all the lost talent, they do return several key pieces of the offense. Bryan Thompson and Jaylen Dixon were two of the Utes’ best receivers in 2019 and both return for 2020. They also boast one of the best tight ends in the nation in Brant Kuithe who will provide an additional receiving threat.

Another stumbling block for Bentley at Utah is how the Utes have previously used their quarterback. Whilst Tyler Huntley has been the starting quarterback for the Utes, he has had over 100 rushing attempts per season. His mobility as a quarterback has made him a dangerous weapon.

Bentley doesn’t have that in his skill set. During his four years with South Carolina, he had 194 rushing attempts for just 143 yards. Utah will have to become more pass focused without their star running back and a quarterback that can make plays with his legs when required.

Being the starter at Utah clearly presents more opportunities than it did at South Carolina. It isn’t without its pitfalls, however.

Kevin Thomson is the most storied of all the 2020 quarterback transfers. His decision to return home to Washington and transfer to the Washington Huskies is the latest chapter, one that was written at the same time as this article.

Thomson was a two-star recruit and the 64th ranked dual-threat quarterback in the 2014 class when he came out of Auburn Riverside High School. You read that correctly, the 2014 class. When the 2021 NFL Draft comes around, Thomson will be a seventh year senior!

He committed to UNLV and spent two years there before transferring to Sacramento State. After sitting out in 2016, Thomson began to make a name for himself with the Hornets.

In his first full year as a starter in 2019, Thomson flourished. With a career-high completion percentage (58%), he threw for 3,216 yards and 27 touchdowns, with 619 yards and 12 touchdowns on the ground too. His play was rewarded with the Big Sky Offensive Player of the Year Award, a First Team All-American nod from HERO Sports, and he finished tied third in the Walter Peyton Award voting.

Thomson entered the transfer portal just last week and has had no difficulty in finding a new home.

The opportunity to go from the FCS level to a Power 5 program like Washington has the potential to boost his NFL Draft stock unlike any of the other 2020 quarterback transfers.

All he needs to do now is beat out a Huskies quarterback room loaded with former four-star recruits.