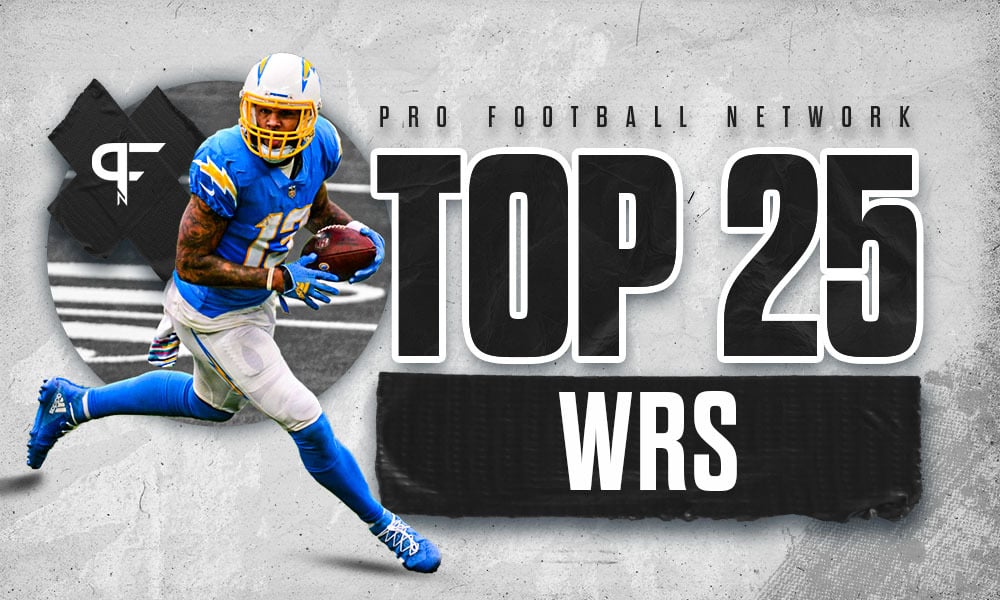 Let’s dissect the rest of the top wide receivers list for the 2021 NFL season — who keeps defensive coordinators guzzling energy drinks at 2 AM to try and gameplan against them?

McLaurin is a star in the making, and it will be fascinating to see how he performs in what looks like an improved Washington offense. McLaurin doesn’t have great size, but he plays physically with exceptional deep speed and suddenness out of his breaks. It might shock some with how high McLaurin is ranked here, but he will show that he belongs this high in 2021. He may deserve to be higher on this top wide receivers list after this upcoming NFL season.

Only six wide receivers were targeted more often than Ridley last year. He isn’t an overwhelming physical specimen like his partner in crime and mentor in Atlanta (Julio Jones), but Ridley is a superb technician. He is extremely effective attacking all levels of the field, and only two players on this list averaged more yards per game than Ridley in 2020.

Godwin really broke out in 2019. Many expected his production to increase this past season with Tom Brady, but that was probably unrealistic considering all the mouths to feed in Tampa Bay. Plus, Godwin endured some injury issues in 2020. Godwin is sure-handed and the prototypical slot receiver for today’s NFL. But the reality is that Godwin can do it all.

Jefferson is the youngest player on this list. He also reeled in more catches of 25 yards or more than any player in football last year — a part of a historic rookie season. What is even more amazing is that it took Minnesota a few games before realizing what they had in Jefferson, keeping him as just a slot receiver to start the year.

Ultra-reliable for his rookie quarterback, Allen caught 100 passes in 14 games last year. He just keeps racking up the numbers over his Chargers career and is one of the NFL’s best route runners, usually out of the slot. Not the biggest or fastest, but Allen is proven and understands how to set up defenders incredibly well.

If a bunch of sixth-graders were picking teams on the playground, Metcalf would be the first selection every single time. Not only is he massive and super fast, but he plays to those insane traits and is only scratching the surface at this point.

Metcalf suffered too many drops, but only Justin Jefferson caught more passes of 25 yards or more last year. However, he isn’t just a take-the-top-off receiver. Metcalf also moves the chains and has developed as a short and intermediate route runner.

2020 wasn’t Thomas’ year (mostly due to injury), and now we will see how he does without Drew Brees. But if we made this list a year ago, there would be a strong argument to have Thomas first overall. Thomas can slant route a defense to death even when they know it is coming, but he brings much more to the party than just that. This is a pivotal point of Thomas’ career, but expect him to produce at higher levels than he did in 2020.

Few seem to look at Evans in this light, but he is very much on a Hall of Fame pace to his career. Evans entered the league at a young age and is now going into his eighth season at just 27 years old. And Evans is in his prime with a fantastic quarterback throwing him the football.

Evans has proven that he can do it all year after year, but his prowess in the red zone really elevated him with Tom Brady under center for Tampa Bay. Only two wide receivers played more snaps in 2020 than Evans, who caught 13 touchdowns last year.

Behind Jerry Rice and probably Randy Moss, Jones is in the conversation as the best wide receiver to ever play the game. His 95.5 receiving yards per game for his career is just obscene, especially when you factor in that Jones was dealing with a foot injury for many of those contests. When you construct a player at this position in a lab, you end up with Jones.

You can say that he is declining — and that is probably true when considering where Jones was at his peak — but this all-time great was still nearly impossible to bottle up last year in the nine games he appeared in. Now with a new team, the Tennessee Titans, we will see if he can recapture the magic he had with Matt Ryan in Atlanta.

It is widely known that Robinson has endured a ridiculous run of poor quarterbacks throwing him the football going back to his Christian Hackenberg days at Penn State. One of the most underrated players in all of football over the past several years, Robinson makes every one of those passers look better than they really are. Robinson was one of only four wide receivers to catch over 100 passes in 2020, and only two were targeted more than Robinson. Let’s see what he can do with Justin Fields.

Is Brown the second coming of Julio Jones? That sounds outlandish, but he might be just that. He is built to play this position and is undeniably nasty after the catch. Brown is also an excellent blocker, which is obviously important in Tennessee’s offense featuring Derrick Henry. He should certainly be up for the challenge, but every coverage scheme Brown faces this year will be designed around slowing him down. Good luck with that.

Hopkins caught the second-most passes in the NFL last year and was the league’s second-most targeted player. That is just what this guy does no matter what team he is on.

Diggs was great for the Vikings, but he was elite for the Bills. Diggs played 1,137 snaps in his first year in Buffalo, more than any wide receiver in the league. He also led the NFL in receptions, receiving yards, and receiving yards per game. Diggs is a complete receiver that can put a passing game on his back. He is as good of a route runner as there is in the NFL right now.

Adams probably enjoyed the most impressive season of any wide receiver in the league last season. Only Stefon Diggs caught more passes than Adams last year — and Adams missed two games. No one was close to Adams’ 18 receiving touchdowns in 2020. Only DeAndre Hopkins hauled in more catches that resulted in first downs than Adams. He does it all. Yet, if Adams didn’t have Aaron Rodgers throwing him the ball this year, how much would that have hurt his production?

Hill is the most dangerous receiver in football — what he can do on the field keeps opposing defensive coordinators up at night. He had the second-most receiving touchdowns in the league in 2020. Hill did have more dropped passes than you would like, but he is so much more than a speed demon. Hill is a great route runner with superb start/stop ability. Even if Kansas City only used him as a jet-motion player, Hill would terrify defenses. Is there a wide receiver in football you would hate to play against more than Hill?

Be sure to follow us on Twitter (@PFN365) to stay in the loop on all things around the NFL beyond the top wide receivers in the NFL for 2021. Also, continue to visit Pro Football Network for NFL news and in-depth analysis concerning the 2021 season and more.