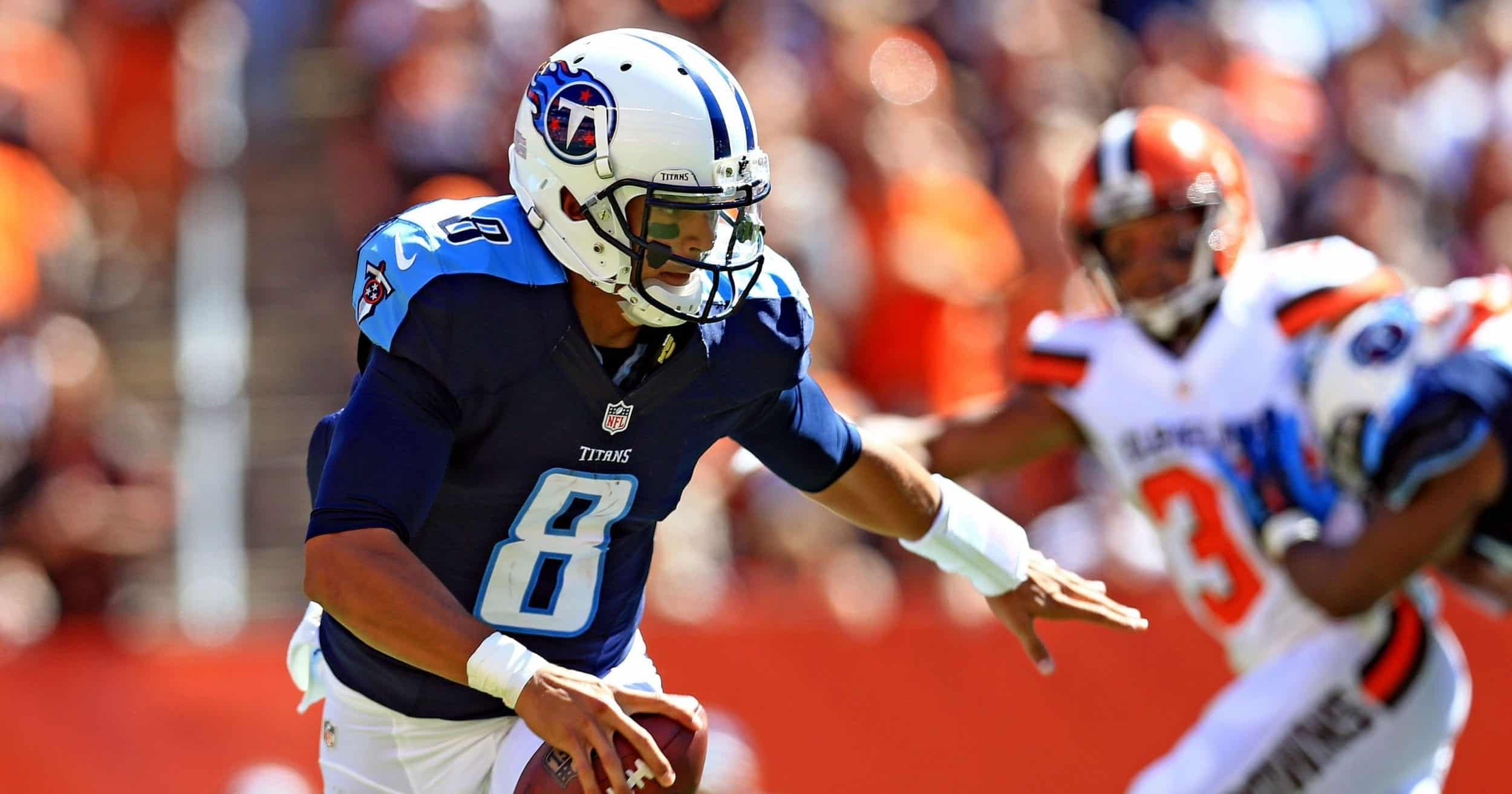 Photo credit: USA Today
What's in this article? Click to show
The Tennessee Titans decided not to select a quarterback in the 2019 NFL Draft. At first glance, it may not seem as though they needed to.
The past successes of Mariota and Tannehill
Mariota and Tannehill’s recent injury history
Who is the Titans current backup plan?
The current situation

The Tennessee Titans decided not to select a quarterback in the 2019 NFL Draft. At first glance, it may not seem as though they needed to.

The Tennessee Titans have both Marcus Mariota and Ryan Tannehill, who have played well in the past. But it isn’t quite that simple. When looked at from another angle, Tennessee’s quarterback room contains two players who have rarely been healthy in recent years, and have been inconsistent even when they were playing. The decision not to draft a quarterback puts the Titans in the awkward position where both their starter and their backup are unreliable, and there is no real plan for what to do if they get hurt. And if that scenario does happen, Tennessee might very well regret not selecting a rookie as a backup.

The past successes of Mariota and Tannehill

Let’s get the obvious out of the way first: assuming that Mariota or Tannehill manages to stay healthy, the Titans draft makes sense. They selected a wide receiver and an offensive lineman in the first three rounds, which should help whoever is playing quarterback for them a great deal. And Mariota and Tannehill have both played well in the past, so it is entirely possible that one of them will do so again in the future.

During his second season, Mariota threw for 3,426 yards, 26 touchdowns, and nine interceptions. These are solid numbers, especially for a second-year quarterback. While I would not necessarily say that those are elite numbers, they aren’t far off either. Had Mariota been able to build on that success, we might be talking about him as one of the best young quarterbacks in the NFL.

As for Tannehill, before he tore his ACL in 2016, he was having a pretty good year. In just 13 games, he threw 2,995 yards, 19 touchdowns, and 12 interceptions. His PFN Offensive Share Metric (OSM) grade was 29. That would have been tied for fourth among all quarterbacks in 2018. And before his injury, he helped lead the Miami Dolphins to their second playoff appearance in almost two decades. Like Mariota, Tannehill’s future looked promising.

Unfortunately, in recent years things have not been going nearly as well for either player. Mariota has yet to finish a full season as the Titans starting quarterback. In all four of his seasons with Tennessee, he missed at least one game due to injury and often played through injuries as well. And in 2018, the problem only got worse. Over the course of the season, Mariota suffered, among other things, a broken rib, a cracked vertebra, and a plantar fascia tear in his foot. Unsurprisingly, he did not end up playing particularly well. In 14 games, he threw for 2,528 yards, 11 touchdowns, and eight interceptions. His OSM grade was just 22.72, putting him in the bottom half of all graded quarterbacks in 2018.

The last few seasons have been even worse for Tannehill. A torn ACL ended his 2016 season. He then re-injured that ACL the following training camp and missed the entire 2017 season. And then in 2018, he sustained a capsule injury in his throwing shoulder which forced him to miss five games. In total, Tannehill has missed 24 out of his last 48 regular season games. Taking all of those injuries into account, it should not be all that surprising that, like Mariota, Tannehill had a terrible season last year. He threw for just 1,979 yards, 17 touchdowns, and nine interceptions. And his OSM grade of 20.72 was one of the worst in the NFL.

Who is the Titans current backup plan?

Between the two of them, Mariota and Tannehill have had a rough few seasons. In order for Tennessee to be successful, they need at least one of them to have a bounce-back year and, more importantly, to stay healthy. Describing either player as injury-prone is slightly unfair because injuries are impossible to predict. But after so many injuries, I think it is reasonable to be concerned about their durability. So what happens if the worst comes to pass and both Mariota and Tannehill get hurt? Well, the Titans current third-string quarterback is Logan Woodside, a 2018 seventh-round pick from the University of Toledo. No, I hadn’t heard of him either. Woodside has yet to appear in an NFL game, but he did recently play for the San Antonio Commanders in the now-defunct Alliance of American Football. Unfortunately, Woodside didn’t present himself in the best light. In eight games, he averaged 173.12 passing yards per game, threw seven touchdowns, and eight interceptions.

If I were in charge of an NFL team, I would not want someone with that resume running my offense in an actual game. But considering Mariota and Tannehill’s respective injury histories, I would not be particularly surprised if that ended up happening at some point in 2019. In fact, I believe there is a non-zero chance that he ends up as Tennessee’s starting quarterback by the end of the 2019 season. And in that case, the Titans will probably not win very many games next year.

Once again, if either Mariota or Tannehill stays healthy and impresses in 2019 none of this will matter. And really, that is the more likely scenario. But Tennessee has not given themselves much room for error. Just a few injuries to two players who have often been injured in the past and the Titans entire season collapses. So not selecting a rookie is a risk. Had Tennessee selected Drew Lock, who was available to them in the first round, or even a later round project player, they would have given themselves more room for error. Instead, they are placing their season in the hands of two unreliable quarterbacks without a real backup plan. I wish them the best of luck. Because if this plan doesn’t work out, then the Titans could very well find themselves selecting a new quarterback early in next years draft, and might end up looking for a new coaching staff as well.