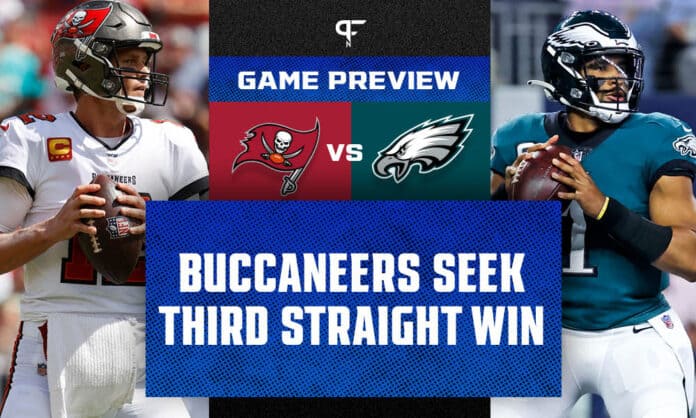 Tom Brady and the Tampa Bay Buccaneers visit Jalen Hurts and the Philadelphia Eagles Thursday. Who will come out on top?

The defending champion Tampa Bay Buccaneers (4-1) go for three straight wins Thursday against a Philadelphia Eagles (2-3) squad searching for its first winning streak since Halloween 2020. The Buccaneers blitzed the Miami Dolphins 45-17 Sunday to stay atop the NFC South. The Eagles, meanwhile, rallied late to stun the Carolina Panthers 21-18. All of the following stats and rankings are through Sunday’s games.

Running back Leonard Fournette got it right when he told new teammate Richard Sherman that “this $#@& is different.” The Buccaneers are absolutely loaded with offensive talent, and when they put it together, they’re unstoppable. They put it together Sunday, ringing up the Dolphins for 558 yards and 33 first downs. Tampa converted 8-of-11 third downs and controlled the ball for more than 37 minutes.

Tampa’s task should be far tougher Thursday. The Eagles just held the Panthers to 267 yards and 3 second-half points to rally for a stunning road victory. It was Philadelphia’s first win in four weeks and a nice bounce-back day for a defense that got lit up the previous two games. The Eagles rank fourth in defensive efficiency (5.0 yards per play) and 10th in yards allowed (336.8) but are bad on third downs (44.6%) and in the red zone (75%).

The Eagles should provide a challenge. They haven’t allowed a passer to go for 300 yards against them all season and just totally confused Sam Darnold. Philadelphia picked off the Panthers quarterback three times Sunday and held him to a passer rating of 44.5. That was no anomaly. The Eagles are third in passing yards allowed (194.8) and fourth in yards per pass allowed (6.2).

Here’s how loaded the Buccaneers are on offense: They torched the Dolphins without Rob Gronkowski. Gronk missed the last two games with cracked ribs, and he’s not playing Thursday, either. O.J. Howard and Cameron Brate can’t do what Gronk does, yet the Buccaneers still had 452 receiving yards against Miami.

That’s because Antonio Brown and Mike Evans were electric. They each had over 100 yards and 2 touchdowns. When Chris Godwin is your No. 3 target, you’re living right. Leonard Fournette is locked into the RB1 role. He’s had 32 of Tampa’s 55 carries the last two weeks.

The Eagles’ base defense is nickel. Cornerbacks Steven Nelson, Darius Slay, and Avonte Maddox have all been on the field for at least 63.8% of Philadelphia’s defensive snaps. Each has 3 passes defended, and Slay’s 2 interceptions lead all Eagles defenders. Maddox is in a contract year and playing great. Opposing quarterbacks average just 4.8 yards per target. Safety Rodney McLeod has been solid in his two games back from ACL surgery.

A big reason for Tampa Bay’s success has been their continuity on the offensive line. They’ve had the same five starters for all five games: Donovan Smith at left tackle, Ali Marpet at left guard, Ryan Jensen at center, Alex Cappa at right guard, and Tristan Wirfs at right tackle. That cohesion has resulted in a sack rate of just 3.95% — the sixth-lowest in football. But that streak is in jeopardy. Jensen is questionable for Sunday’s game with a hip injury. Whether he plays or not, the Buccaneers need to get better running the ball. They’re averaging just 82 yards per game — the seventh-fewest in the NFL.

This might be just the weekend to get on track. The Eagles have allowed the third-most rushing yards in football (142 per game). They’re middle of the pack in yards per rush (4.3) and sack rate (2.5%). Defensive tackle Javon Hargrave has been an absolute menace in the middle. His 6 sacks, 7 tackles for loss, and 9 QB hits are all by far the most on the team. The Eagles decided to extend Josh Sweat for three more years and $40 million, but he has yet to really pop this season.

The Eagles won a slugfest with the Panthers, but their offense was not good. Philly averaged just 4.5 yards per play, had 15 first downs, and went 4-of-13 on third downs — and probably would have lost if not for a blocked punt with four minutes left in the game. On the year, the Eagles are in the top half of the league in total yards (372.6), yards per play (6.1), third-down efficiency (40.3%), and red-zone efficiency (64.7%).

The Buccaneers are coming off back-to-back solid defensive games, holding both the Dolphins and Patriots to 17 points. But that might be more a function of the opponent than the quality of the defense. The Bucs are really good stopping the run but not so good stopping the pass, as we’ll get into further. Put it together, they’re 17th in yards per game (360.2) and yards per play (5.7), and 20th in points allowed (24.4).

Pick a statistical category and Hurts will probably be the middle of the pack. Yards per attempt? 19th (7.5). Yards per game? 11th (273.0). Completion percentage above expectation? 14th (1.3%). Will that be good enough to convince the Eagles that he’s their guy going forward? Way too early to tell. But he certainly has not lost the job, and he might benefit from a really bad year of college quarterbacks in the 2022 NFL Draft. Hurts’ legs are a weapon — he leads the Eagles in rushing (256 yards and 3 touchdowns on 43 carries).

Hurts should have some opportunities to improve those rankings this weekend. The Buccaneers’ issues in the defensive backfield are well-documented. Richard Sherman was out of the league three weeks ago. In the past two games, he’s been on the field for 99% of Tampa Bay’s defensive snaps. That helps explain Tampa’s pass defensive stats — last in yards allowed (314.4 per game) and 28th in third-down efficiency (46%).

The Eagles’ big offensive headline from Week 5 was that Quez Watkins finally out-snapped Jalen Reagor. That’s significant because it suggests that the coaching staff has come to grips with an inconvenient truth: Watkins, a sixth-round pick in 2020, is better than Reagor, a first-round pick in 2020.

The numbers back that up. Watkins is nearly tripling Reagor in yards per catch and doubling him in receiving yards. Watkins and DeVonta Smith (who has 25 catches on 39 targets for 314 yards and a touchdown) could be a dynamic duo for years. Running back Miles Sanders is averaging 3.4 yards per carry.

Now for the Bucs. It’s easy to pick on Sherman — who has allowed all 9 passes thrown in his direction to be completed and has a passer rating against of 113.9 — but he’s being set up to fail. He’s playing in a foreign system at an age in which his skills have diminished. But the Bucs have no other choice. Carlton Davis and Sean Murphy-Bunting are both on IR. Jamel Dean gutted it out Sunday despite dealing with a knee injury and was rewarded with an interception. Safety Antoine Winfield is out with a concussion.

Three-time Pro Bowl right tackle Lane Johnson has left the team to deal with a personal matter and might not return in 2021. That’s bad news for an offensive line that has already lost left guard Isaac Seumalo (foot) and right guard Brandon Brooks (pec). Still, the line the Eagles trotted out against the Panthers — Andre Dillard at left tackle, Landon Dickerson at left guard, Jason Kelce at center, Jack Driscoll at right guard, and Jordan Mailata at right tackle — hung in there. The Eagles allowed just 4 quarterback hits and averaged 4.1 yards per carry against a solid defensive front.

They’ll need to eat their Wheaties against one of the best defensive fronts in football. The Buccaneers are first in rushing yards allowed (45.8 per game) and yards per carry (2.9). Teams largely have given up trying to run against Tampa. The Dolphins and Patriots together rushed 17 times for 38 yards. Pass rush is more of a concern, however. Their sack rate (4.4%) is fourth-worst in the league. Shaquil Barrett leads the team with 3.5 sacks. Making matters worse, linebacker Lavonte David is unavailable with an ankle injury, and Jason Pierre-Paul is questionable with shoulder and hand issues.

Betting line and prediction for Buccaneers vs. Eagles

There will be a week in which a top-flight quarterback will expose Tampa Bay’s pass defense, and the Buccaneers will look very mortal. This is not that week. Tampa Bay is laying a touchdown, and that seems generous — to Philadelphia. The Buccaneers far outpace the Eagles in point and yard differential. If they protect the football, they will win comfortably.