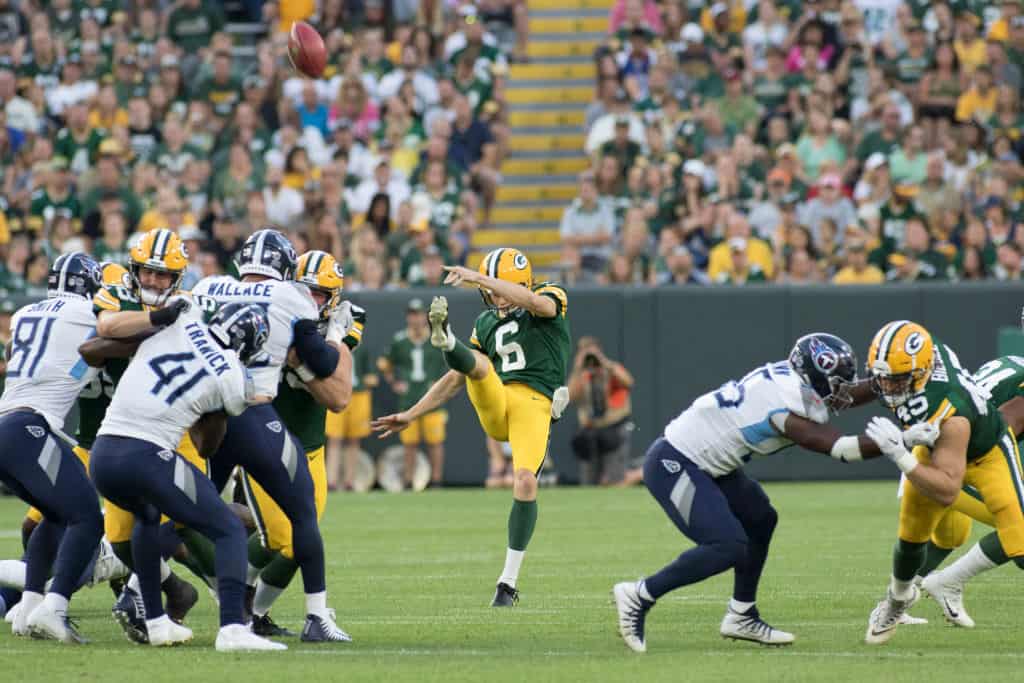 Who plays on Sunday Night Football tonight in Week 16? The Tennessee Titans head to Lambeau to face off against the Green Bay Packers. Can the Packers inch closer to a first-round playoff bye or will the Titans clinch their playoff berth?

Here is more information on where, when, and how you can watch tonight’s NFL game. We also provide a preview and prediction of tonight’s tilt and a 2020 Sunday Night Football Schedule breakdown. For more info on the current playoff race, look no further than the Pro Football Network!

Barring a Week 17 Sunday night flex, NFL fans will be treated to a quality wrap-up of Sunday Night Football for the 2020 season.

Both the Titans and Packers have high-profile playoff seeding on the line as they head into this matchup. Green Bay has a good defense, but there’s a reason the Titans paid Derrick Henry. Henry has rushed for at least 100 yards in all but four games this season. He leads the league in rushing yards for the second season in a row, and it’s not nearly as close as last season.

Tannehill and the Titans pass offense

Titans QB Ryan Tannehill has also continued to impress in Tennessee this season, throwing 31 touchdowns to just five interceptions. He has found the perfect NFL home with a solid offensive line to afford him time in the pocket paired with the most lethal running back in the league. Everyone knows this offense can put up points. They’ve crossed the 30-point mark eight times this season.

Green Bay, however, is one of the strongest tests the Titans will face this season, and gives an accurate representation of where the Titans stand among the contenders this year. While the offense has been firing on all cylinders all year, can the Titans defense do anything to slow down Aaron Rodgers?

Will snow in Lambeau make for vintage Rodgers?

Is there any more football-esque landscape than a snowy football game on Lambeau Field? Most of those pictures from the modern-day era will feature two notable names: Brett Favre and Aaron Rodgers. The latter is having one of the greatest seasons of his already impressive career, and has the Green Bay Packers in line for the No. 1 seed in the NFC.

Head coach Matt LaFleur and Rodgers have paired perfectly, with Rodgers playing excellent football and the Packers making scoring points seem effortless. They might be the Chiefs of the NFC if you are one for comparisons.

The Packers defense has had some struggles this season, and Derrick Henry is a challenge for any team. However, they can’t forget about Tannehill’s ability to make things happen through the air. Many teams have fallen victim to overcommitting to Henry only to be burned by an A.J. Brown touchdown catch.

This has the makings of a high-scoring affair, but Aaron Rodgers will be too much for a mediocre Titans defense, causing Tennessee to fall short.