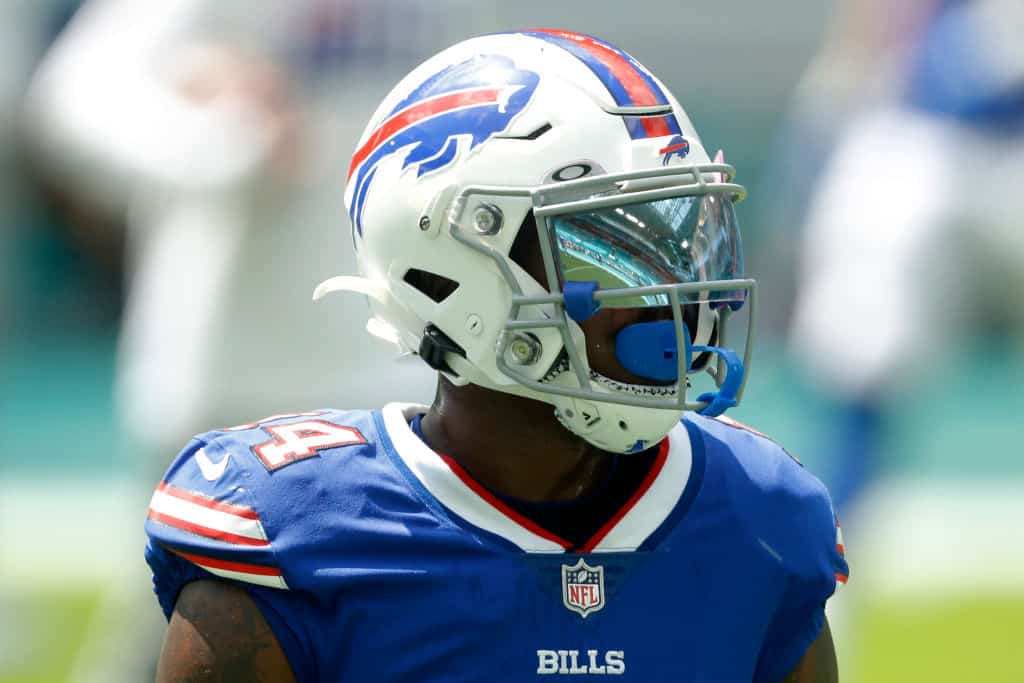 Diggs’ production came on a mix of Josh Allen rockets, some deft touch passes of the sort Allen is supposed to be incapable of throwing, and at least one instance of Diggs leaping to haul in a gopher ball in traffic. Frankly, that’s a fine mix for a Pro Bowl receiver acquired to take a young quarterback and team to their next stage of development.

Interestingly, Diggs did most of his damage against rookie CB Noah Igbinoghene while top defender Xavien Howard covered lesser receivers, even after Byron Jones was forced out of the game early with a groin injury. We’re watching Brian Flores carefully for signs that he attended the Matt Patricia School of Never Adjusting Your Defense.

The San Francisco 49ers rushed for 182 yards, but that only tells part of the story. Raheem Mostert rushed untouched for 80 yards on the first play from scrimmage. Mostert later had a 67-yard touchdown negated by a holding penalty. Jerick McKinnon rushed for 55 yards on 3rd-and-31. (That’s third-and-thirty-one). Nick Mullens knelt to kill the clock at the end of the game and somehow gained 12 yards. (Not really). There’s poor talent, there’s poor scheme, and then there’s an utter lack of pride. The Jets defense executed the trifecta on Sunday.

Higbee is a fine player who had a great game, but except for one crisp deep pass up the left sideline for a touchdown, most of his production came on rollout “waggles” that are designed to get the tight end open in space for an easy toss. Maybe the real “stud” is Sean McVay, who appears to have designed 2,500 different variations on the rollout waggle.

Oh, you guys thought you could stand still and stare at an onside kick like it was a pair of dice you were hoping would come up “boxcars” and NOT get individually dimed out by name on NFL Recap because most of you are obscure special teamers? WRONG. And yes, Julio was there: He can clearly be seen running up toward the ball and then stopping as if he were struck by a force field about five yards away.

Who needs to keep wide receiver Allen Robinson happy when you have a 315-pound lineman who can catch deflected passes for fourth down conversions?

“That’s not how we drew it up,” quipped Mitch Trubisky about Massie’s clutch look-what-I-found catch during a fourth quarter in which the Bears tried to hand the win to the Giants, who wouldn’t accept it.

Duds: Folks criticizing the play call at the end of the Seahawks-Patriots game

Sure, Tailgate Joe: The “play” you would have “called” would have worked perfectly and given the Patriots the win, even though you spent the whole game referring to Cam Newton’s receivers as “Nickel Henry” and “Danny Welker.”

We’ve played you in Madden, dude: You only call four plays, and you execute all of them by running your quarterback 25 yards straight backward and just jamming a button. Oh, and you didn’t know what you were talking about at the end of Super Bowl XLIX, either. There were just more of you.

Maybe the Falcons should trade for Massie and put him on their hands team.

And now for your NFL Recap Week 2 Awards:

David Bakhtiari, Elgton Jenkins, Corey Linsley, Lucas Patrick, and Ricky Wagner helped Aaron Jones and company rush 35 times for 259 yards and two TDs in a 42-21 rout of the Detroit Lions. On some of Jones’ runs, the Packers line appears to drive the entire Lions defense five yards off the ball.

Watt was credited with 2.5 sacks but had a hand in many of the sacks and big plays produced by his teammates. For example, Bud Dupree delivered the hit that produced a strip sack and knocked Drew Lock out of the game, but Watt made the play possible by spilling Lock from the pocket in Dupree’s direction.

CJ Goodson recovered the week’s most important onside kick for the Dallas Cowboys, but we’ve already addressed the fact that he would not have gotten near the football if the Atlanta Falcons didn’t suffer from successophobia. So let’s make this a Watt family reunion. Derek Watt crashed through the line after Broncos punter Sam Martin mishandled a snap and tackled Martin in the end zone for a safety that gave the Steelers some breathing room in a too-close-for-comfort win.

Baltimore Ravens running back Mark Ingram put his team’s eventual 33-16 victory over the Houston Texans out of reach with a 30-yard touchdown run off a direct snap. But Ingram might not have even gotten first down yardage if fullback Patrick Ricard didn’t squash safety Justin Reed coming off the edge. Ricard fumbled on 4th-and-short last week, so that block offered some redemption.

Mike Tanier is the Senior NFL Writer for Pro Football Network and the author of NFL Recap. You can follow him on Twitter: @MikeTanier.