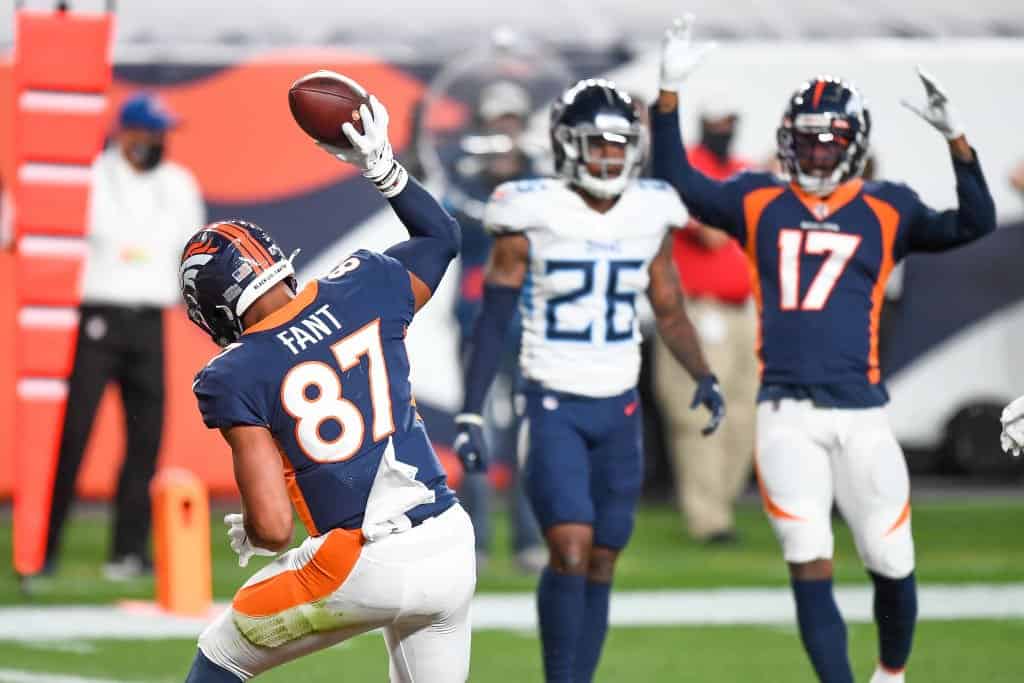 DENVER, CO - SEPTEMBER 14: Noah Fant #87 of the Denver Broncos celebrates after a first quarter touchdown reception against the Tennessee Titans at Empower Field at Mile High on September 14, 2020 in Denver, Colorado. (Photo by Dustin Bradford/Getty Images)
What's in this article? Click to show
Can Noah Fant get open against the Pittsburgh secondary?
How will Garett Bolles and Elijah Wilkinson perform against Bud Dupree and T.J. Watt?
Can Michael Ojemudia contain JuJu Smith-Schuster?

One week into the National Football League season and the Denver Broncos find themselves sitting at 0-1, facing a steep uphill climb in the form of the Pittsburgh Steelers, to avoid going 0-2. Here are three key matchups to keep an eye on in the Broncos Week 2 clash with the Steelers.

Can Noah Fant get open against the Pittsburgh secondary?

Courtland Sutton was inactive for the Broncos’ Week 1 loss to the Titans, and as a result, Noah Fant became the go-to target for Drew Lock and the Denver passing attack. With Sutton’s availability for the Broncos’ Week 2 game against the Steelers up in the air, it’s crucial that Fant delivers another dominant performance.

In the first half against Tennessee, Fant reeled in five passes for 81 yards and scored his first touchdown of the season. His ability to pick up yards after the catch was especially impressive, as he was able to out-run or run over most defenders that got in his way. The second half was a different story, however, as he received only one target and the offense’s production went down as a result.

Related | Three takeaways from the Titans and Broncos Week 1 matchup

Fant can’t let that happen in Week 2, especially if the offense is without Sutton. In this game between the Steelers and Broncos, Fant’s matchups with Terrell Edmunds, Minkah Fitzpatrick, Devin Bush, and whichever other members of the Pittsburgh defense try to cover him, are going to be crucial to the offense’s success.

With the two elite defenses of the Broncos and Steelers squaring off, this game should be one of the lowest-scoring matchups we see this weekend, and offensive opportunities should be few and far between. That makes big plays much more valuable, and Fant looked like a big play machine on Monday Night Football.

How will Garett Bolles and Elijah Wilkinson perform against Bud Dupree and T.J. Watt?

If you forgot about Garett Bolles on Monday night, you’re far from alone, and that’s a very, very good thing for the Broncos offense.

Bolles might have played the best game of his career against the Titans, as he eliminated big-name free-agent signing Jadeveon Clowney from the game almost entirely. Clowney racked up just three tackles, and Bolles allowed just one pressure on Lock all day long. Right tackle Elijah Wilkinson also had a good performance in his matchup with Harold Landry, allowing just one pressure, as Landry made only four tackles.

That’s a fantastic start for a tackle tandem that was regularly criticized, rightfully so, throughout this year’s training camp and during the season in 2019. If Wilkinson and Bolles can improve this year, it will be tremendous for the development of both Lock and the rest of the offense.

They have their work cut out for them this week, though, as Bud Dupree and T.J. Watt present a much stiffer challenge than Clowney and Landry did. Playing against the Giants, Dupree and Watt were unstoppable despite not generating a sack, as they pressured Daniel Jones 15 times combined. Dupree even forced an interception in the red zone on one of his pressures.

If the Broncos don’t want Lock to look like Jones did, they’re going to need Bolles and Wilkinson to continue to play at a high level.

The decision to take Ojemudia at the top of the third round when most draftniks viewed him as a fourth-round prospect was much maligned at the time. Shortly after that decision, the Broncos’ decision to release De’Vante Bausby and start Michael Ojemudia ahead of him was also criticized. But look who’s laughing now.

Ojemudia’s late pass interference might have been the nail in the coffin for the Broncos in their game against the Titans, but he played incredibly well for the rest of that game. A.J. Brown was nearly shutout in the first half, thanks in part, to Ojemudia. Additionally, his diving interception could have been the play of the game if it wasn’t overturned by a questionable penalty.

With A.J Bouye now out for the next couple of weeks, one of the most important defensive matchups for the Broncos against the Steelers will be Ojemudia against JuJu Smith-Schuster. Bryce Callahan is a better cornerback than Ojemudia at this stage in their respective careers, but he’s far too small and light to take on a receiver as big, physical, and strong as Smith-Schuster. That means the third-round rookie should find himself on an island against the former Pro Bowl receiver for much of this game.

If he’s as effective against Smith-Schuster as he was against Brown, the Denver defense should be able to keep this game within reach for the offense. If, however, Smith-Schuster is able to get open, he’ll be a difference-maker, just like he was in Week 1 against the Giants.