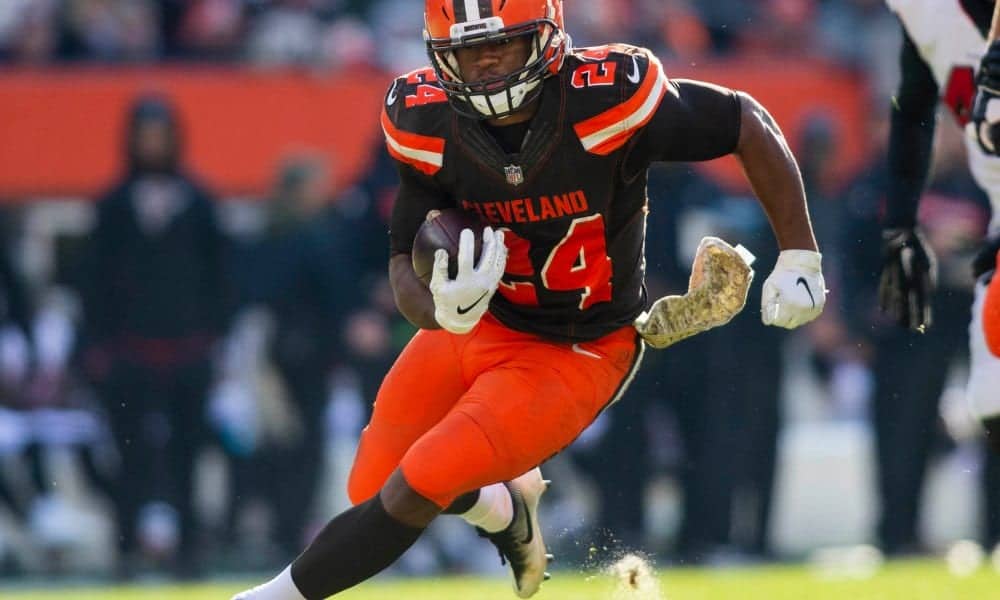 With the upcoming season, there are many storylines to consider for the Cleveland Browns. Will QB Baker Mayfield take a permanent step forward? Will DE Myles Garrett come out with a vengeance?  The question I am most entertained by though is this – what will happen to this two-headed monster of a backfield with Kareem Hunt and Nick Chubb?

Breaking down this two-headed monster

Chubb is entering his third season, with the aforementioned Mayfield, and is coming off a fantastic sophomore campaign that saw him finish second in the league in rushing with 1,494 yards.

Of the two of them, Chubb is definitely the thunder to Hunt’s lightning so to speak but that doesn’t mean Chubb isn’t capable of breaking off big runs. He has shown this time and again and if you go back and look at his coming out party his rookie year when he had three carries for 105 yards, you see two brilliant examples of that.

With Hunt, it’s a matter of getting into a rhythm. Last year, he was forced to sit eight games due to violating the league’s personal conduct policy. Hunt came in and finished with 80 touches, 464 yards, and just three touchdowns. Since he’ll have a full offseason and will be able to participate in all 16 games barring any injuries, it’s only safe to assume that these numbers will skyrocket this year.

If Hunt can get back to his former Kansas City Chief self, then the Browns should be in serious business. With new head coach Kevin Stefanski coming in and offensive coordinator Alex Van Pelt coming over from the Vikings and Bengals respectively, I think this offense is going to be more run-heavy to take the pressure off Mayfield.

The 2008 Tennessee Titans were a load of fun to watch each and every week. They were led by Kerry Collins, who only had to pass the ball 415 times that year because the duo of Chris Johnson and LenDale White carried the ball 451 times between them. Johnson would finish with over 1,200 yards while White chipped in a courteous 773 yards. Together, they would find the endzone 17 times.

We know that Chubb is going to be the lead back and Hunt will be the complimenting handcuff. I do think Chubb takes a step back in rushing yards just because the secret is out about him but also because Hunt should be involved more. I can see them both having similar yard totals to Johnson and White in 2008 and if they can replicate the touchdown totals, then the Browns will be in serious business come January.

Yes, January. Remember that the Titans went on a magical run that year going 13-3 and that was because of the run game. If the Browns make it to the playoffs, then it will be in large part due to Chubb and Hunt.

Minnesota Vikings running backs Dalvin Cook and Alexander Mattison showed early and often that they were near the top of the list when it came to young running back duos in the NFL. If this is the Browns’ worst-case scenario, it is not a bad one to have.

Cook and Mattison combined for 2,198 total yards and while it is more than the combined yards of original smash and dash in Johnson and White, the usage is what we are comparing. Johnson and White were a perfect compliment for each other much the way I see Chubb and Hunt. Mattison earned many of his touches in relief of Cook rather than as a compliment.

For this Browns team to succeed, they need the two of them to be interchangeable in the offense and passing game. Mattison and Cook just weren’t at times throughout the season, but the talent gap between them is larger than between Chubb and Hunt.

Final projections for the Browns backfield

We talked about Chubb nearly leading the league in rushing last year, if not for a final push from eventual leader Derrick Henry. Hunt, before his suspension, had a whopping 1,202 total yards through 11 games in 2018.

Browns fans know that these are two very talented backs. Heck, the whole league knows it. What we don’t know is what to expect from them in terms of production with both of them active and healthy for a full season.

I think a combined 2,700 total yards isn’t completely out of the realm of possibility for the two of them. Chubb will literally, carry the weight of the rushing game while Hunt will pick up the slack catching passes out of the backfield.

Bottom line – with coaches Alex Van Pelt and Kevin Stefanski in control of the offense and their known play-calling style,  I think we see a heavy dosage of Chubb and Hunt throughout the season.