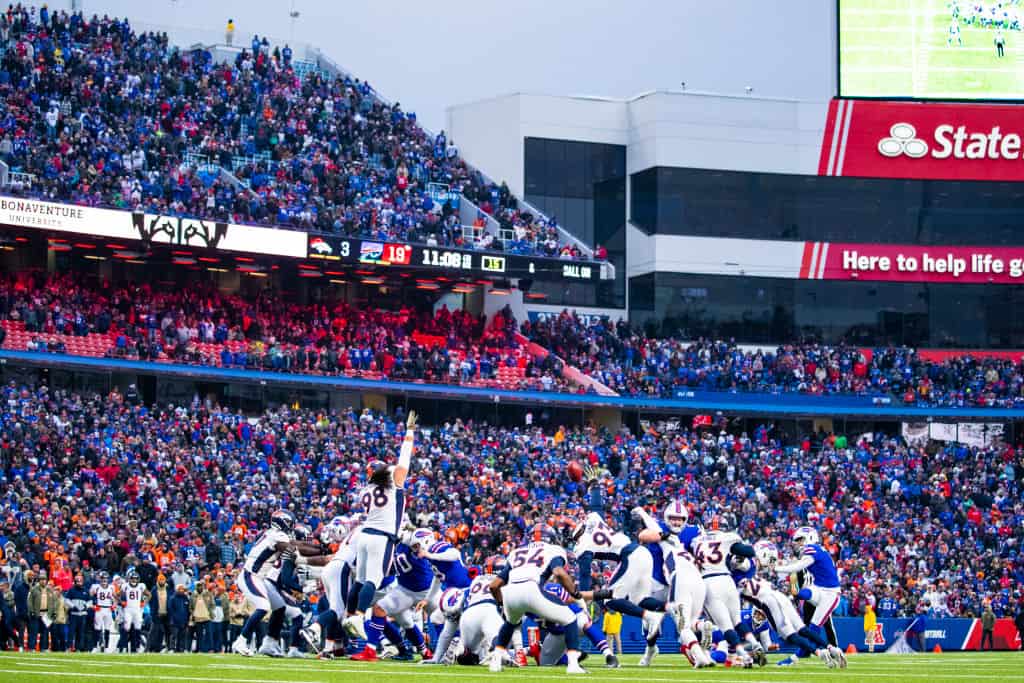 ORCHARD PARK, NY - NOVEMBER 24: General view as Stephen Hauschka #4 of the Buffalo Bills kicks a point after try during the fourth quarter against the Denver Broncos at New Era Field on November 24, 2019 in Orchard Park, New York. Buffalo defeats Denver 20-3. (Photo by Brett Carlsen/Getty Images)
What's in this article? Click to show
What teams are on the Saturday NFL games Schedule?
Bills vs. Broncos Week 15 | Start time, TV channel, and live stream
Week 15 Saturday NFL Games | What to expect from Bills vs. Broncos?
Can Denver hold onto the ball?
Saturday NFL Games

The NFL Games Today series sees its first rendition of the Saturday NFL Games schedule. Week 15 coincides with the college football regular season’s end, so fans are treated to NFL football scheduled four days a week in Weeks 15 and 16. The Buffalo Bills head to Denver to take on the Broncos at 4:30 PM ET. Both teams are coming off victories in Week 14. Can Buffalo continue to roll and keep the pressure on the Steelers for the second seed in the AFC?

What teams are on the Saturday NFL games Schedule?

Week 15 Saturday NFL Games | What to expect from Bills vs. Broncos?

The Bills are hot coming into this NFL game today. Stefon Diggs torched the Steelers, and that does not bode well for Denver whatsoever. The Broncos only have three cornerbacks on the roster after losing five others this season. Buffalo has built up a solid offense, surrounding QB Josh Allen with guys who can make some plays.

The aforementioned Diggs is tearing it up this season. Behind him, WR Cole Beasley has a chance to eclipse 1,000 receiving yards as well. Then, to round out the room, rookie WR Gabriel Davis has developed great chemistry with Allen, and he has more TDs than any player on the team besides Allen with six.

The running game has been a bit suspicious this season, as RBs Devin Singletary and Zack Moss have combined for just 911 yards and four touchdowns. However, Allen has contributed his own 350 yards and six touchdowns here, too. Allen has had a great year and improved in some areas where he struggled the past two seasons, leading his team to a 10-3 record.

What’s even better for Buffalo is that its defense is turning a corner at the right time. The first half of the season was underwhelming, especially considering the Bills’ stifling defensive presence the past few years under HC Sean McDermott. They’ve recently seen a slew of important pieces return from injured reserve, including LB Matt Milano, CB Josh Norman, and CB Levi Wallace.

While the Steelers had been looking shaky the past few weeks, holding an 11-1 team to just 15 points and 224 total yards, and under 50 on the ground is an accomplishment. With this defense gaining more chemistry with every week, the Bills should have no problems with Denver.

Can Denver hold onto the ball?

Denver played a great offensive game against the Panthers last week with QB Drew Lock tossing four touchdowns, but the Panthers are not the Bills. The Panthers have beat just one team with a winning record, and the defense has only held the Chargers, Falcons, and Lions to under 20 points. Denver’s offense can turn the ball over, and they have this season, 29 times. The Broncos’ turnover differential is -18, the worst in the league, and the Buffalo defense is starting to become very opportunistic.

Things don’t look too bright on the defensive side of the ball for Denver. Ravaged by injuries and one suspension, this NFL game today will be decided based on which Broncos offense shows up. And depending on his performance, this game could be a deciding factor on Drew Lock’s future in Denver.

While the Panthers’ defense isn’t the best, they compare very similarly to Buffalo. However, with the return of key pieces, the gap may have gotten wider between them. If Lock drops an egg, it will be tough to see him lasting much longer, even after his performance last week.

With the season coming to an end, be sure to check out the latest up-to-date information on the current playoff picture. The Buffalo Bills have some scenarios that can play out this week that can rapidly change their seeding moving forward.