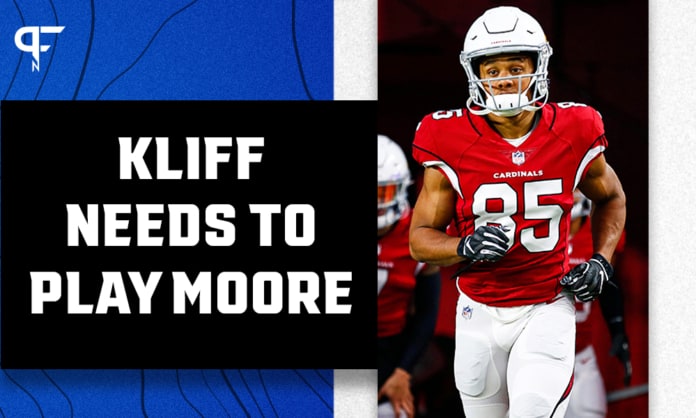 Rondale Moore is already dangerous, and he’s hardly a receiver yet

Cardinals WR Rondale Moore is already an outstanding playmaker, and he isn't even a developed receiver yet. His future is incredibly bright.

Rondale Moore is already wowing onlookers with his ability after the catch. The Arizona Cardinals WR and second-round pick from Purdue leads all rookie receivers in yards, yards after the catch, and yards per route run.

Moore was viewed as a first-round lock but was hindered by soft tissue injuries while at Purdue. It’s why he fell in the draft, but he’ll probably outplay his draft slot. And if he learns the finer points of the position, he could end up as the best receiver in a ridiculously loaded class.

This is why his landing spot was important. It would have been easy for Moore to land with a team that would use him in a traditional slot role. In that case, he wouldn’t have been nearly as effective early in his career.

Using Moore on these pop passes from jet motion are an excellent way to get him the ball without sending him on a route. Obviously, the screen game is going to be a nice chunk of Moore’s usage, too.

The coaching staff will sit Moore down and politely explain to him that fumbles in the red zone will put his butt on the bench — no matter how explosive he is. But that’s not what’s important about this play for the Cardinals WR.

First, this is a designed play for the pint-sized rookie. It’s apparent that Kliff Kingsbury and the offensive staff want to get the ball in his hands, and this play shows why. Linebacker Nick Vigil takes an entirely horizontal track in an attempt to cut off Moore on the edge. However, despite Vigil’s obtuse angle, he never has a chance.

Moore wasn’t a developed route runner in college, but he was so good after the catch that he didn’t need to be. It appears that’ll be the case early in his NFL career as well. But it will be interesting to see how he fairs against teams that play more man coverage than the Titans and Vikings.

Despite weighing in at just 181 pounds at his pro day, the Cardinals rookie WR has some of the best contact balance you’ll find in a receiver. It’s a leverage and density game with Moore. He’s only 5-foot-7, which means he is thick. He possesses outstanding lower body mass, and his small target area and agility already make him difficult to tackle.

His direction changes are violent, but even though Vigil is once again in the area, he can’t finish Moore. His low center of gravity allows him to stick a hand in the turf and stay upright.

This play was massive in the grand scheme of the game. This was the final play before the half where the Cardinals kicked a 62-yard field goal to put them up by 1. They ended up winning the game by that number.

But the most impressive part of this play was getting out of bounds and not allowing the clock to strike zero. Moore was able to pick up extra yards, make Eric Kendricks miss, and shoot out of bounds with one second left. That type of heads-up play is often missed by veterans, let alone a rookie.

The touchdown pass to Moore was made by Kyler Murray. The third-year quarterback’s ability to freelance when things break down offensively is unmatched. His unrivaled elusiveness around the pocket is Houdini-esque.

Pair that escapability with his arm strength, and Murray can easily create opportunities downfield for his receivers. Because Moore is an athletic mismatch with outstanding change-of-direction himself, his ability to uncover on broken plays will be a constant.

Moore is no stranger to the big stage, either. He almost single-handedly beat Ohio State as a freshman!