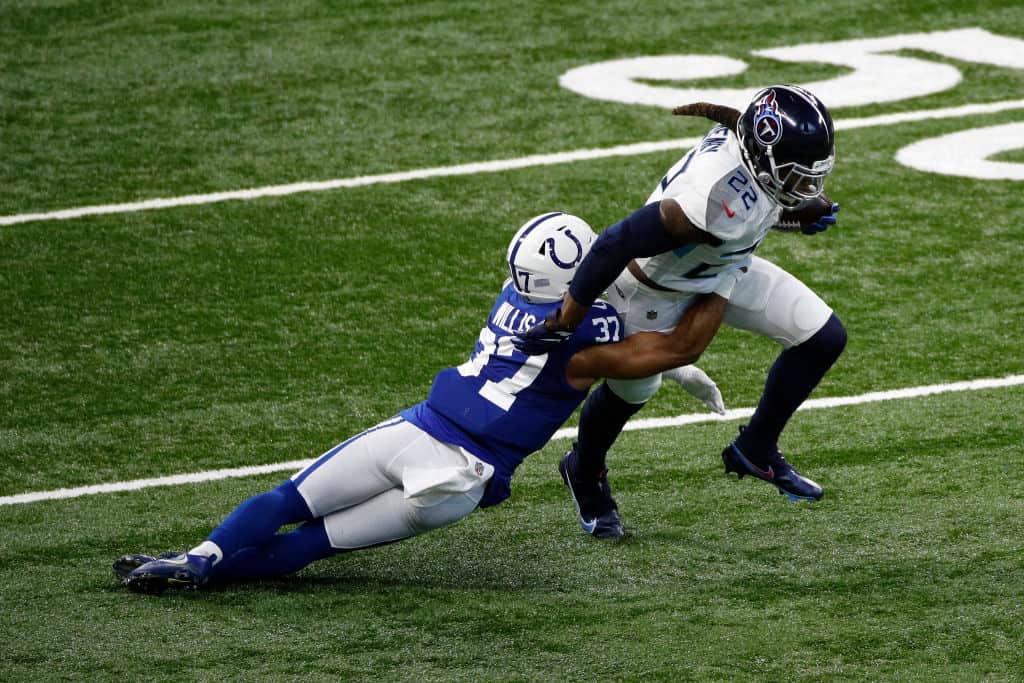 INDIANAPOLIS, INDIANA - NOVEMBER 29: Derrick Henry #22 of the Tennessee Titans attempts to break a tackle from Khari Willis #37 of the Indianapolis Colts during their game at Lucas Oil Stadium on November 29, 2020 in Indianapolis, Indiana. (Photo by Michael Hickey/Getty Images)
What's in this article? Click to show
What to keep in mind heading into Week 13 and searching for the best fantasy football running back
Fantasy RB Rankings Week 13: Sleepers, must-starts, potential busts
The best of the rest
Want more fantasy football analysis and news?

Week 13 brings with it the end of the regular season in most fantasy leagues, with the playoffs kicking off in Week 14. Week 12 brought with it the chaos we’ve come to expect from the 2020 fantasy football season. We had injuries, illness, and the rollercoaster of the Ravens and Steelers game ending with running back committees of Gus Edwards and Justice Hill taking on Benny Snell Jr. and Anthony McFarland Jr. Our Week 13 fantasy RB rankings will tell you all you need to know when setting your lineups.

The last bye week of the season means that fantasy managers will have to prepare to be without some of their starters this week. If you have Christian McCaffrey on your roster, then you’ve likely made other plans for the majority of the season, but you’ll have to wait another week. Both him and his backup, Mike Davis, are on a bye this week. The Bucs’ week off will leave you without fantasy football standout running back Ronald Jones.

Josh Jacobs was ruled out on Friday, leaving fantasy managers scrambling to try and replace him. Devontae Booker is expected to see the majority of the touches and has risen up the Week 13 fantasy RB rankings but has big shoes to fill. James Conner and Todd Gurley could also miss the game, so fantasy managers should check for injury updates before the game.

Note: Please keep in mind that these are PPR RB rankings. PPR in fantasy means that a running back gets an additional full point for each reception. This can play a big factor when deciding which players to put into your lineups and makes volume all that much more important.

Our top two fantasy running backs in our rankings are playing in the same game this week as Dalvin Cook’s Minnesota Vikings and James Robinson’s Jacksonville Jaguars go head to head. The Jaguars have continually struggled to stop running backs, and Cook has been outstanding this season. Robinson has dominated touches and continues to be used no matter what situation the Jaguars are in.

Austin Ekeler’s return from injury saw him pick up exactly where he left off, showing the dynamism and ability to play on all three downs that have made him one of the most valuable fantasy RBs. Another running back who has traditionally been just as effective catching passes as running the ball is Alvin Kamara, but his ceiling looks to have been capped by Taysom Hill, who often rushes in the red zone and rarely looks to Kamara as a receiver.

Another game that should go through the running backs is the Tennessee Titans vs. the Cleveland Browns. Derrick Henry has touched that ball more times than any running back and looks unstoppable. He should continue to be the focal point of the offense.

The running backs that round out the top 10

On the other side of the game is the Browns’ two-headed monster of Nick Chubb and Kareem Hunt. The RB duo has continued to pile up production, and Chubb should impress again.

The other running backs in our top 10 include Aaron Jones, who had his most rushing yards since Week 2 last week. He had his fewest receptions of the season, but the Packers should be able to move the ball. Chris Carson faces a middling New York Giants run defense but benefits from being one of the top offenses in the league.

James Conner handles a heavy workload when available and should continue to do so, even if the Washington Football Team has performed well against running backs. Miles Sanders and the Eagles are likely to be playing from behind but go against a Packers team that has continually surrendered fantasy points to RBs.