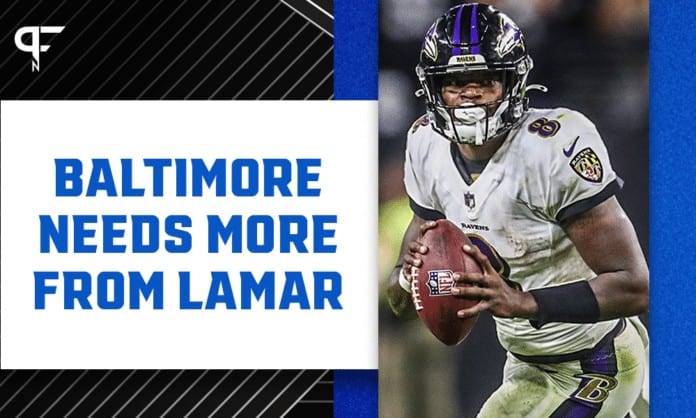 Lamar Jackson has been an inconsistent passer his entire career. He needs to be better for the Ravens to find long-term success.

By Lucas Ellinas
September 19, 2021
What's in this article? Click to show
Lamar Jackson’s traditional stats against Las Vegas were a mixed bag
The advanced metrics suggest Baltimore’s QB had an underwhelming day as a passer
Jackson’s Week 1 OVM grade was in line with his performance last season
If the Ravens want to win a Super Bowl, he must improve

The Baltimore Ravens lost to the Las Vegas Raiders in bewildering fashion on Monday night. Let’s look at how Lamar Jackson played in the bizarre and fascinating defeat.

On the surface, Jackson’s box score from Monday seems decent enough. He threw for 235 yards and a touchdown and added 86 yards on the ground.

However, Jackson also fumbled 3 times (losing 2), including one on Baltimore’s final overtime drive that would eventually lead to the Raiders’ game-winning touchdown.

Clearly, those were costly mistakes. Though Jackson contributed greatly to the Ravens’ successes on Monday, he also had a hand in their failures.

Jackson’s abilities as a passer are often criticized, so it’s worth taking a closer look at how he performed in this capacity against the Raiders.

To this end, let’s turn to the Offensive Value Metric (OVM). The OVM is a grading system created by the (Bx) Movement to evaluate players based on how much they contributed to the creation of their statistics, rather than the statistics themselves.

In Week 1, Jackson earned a grade of 21.99, which ranked 20th among the 32 qualifying quarterbacks from opening week. That suggests Jackson was one of the least effective passers in Week 1, which isn’t a particularly encouraging sign for the Ravens going forward.

To understand why the OVM graded Jackson relatively poorly in Week 1, we need to examine the advanced metrics involved in creating it. To his credit, Jackson performed well in some areas. For example, he threw into tight windows on 20% of his pass attempts, tied for the sixth-highest percentage.

Unfortunately, he didn’t complete those passes particularly often. His completion percentage was relatively low (63.3%). Worse, according to the NFL’s projections, that number was 1.1% lower than it should have been.

Jackson has struggled with his accuracy since entering the league, and it seems those issues continued to haunt him on Monday.

Although Jackson’s Week 1 OVM performance doesn’t look great, it’s worth noting that it is largely in line with the grades he received in 2020.

His overall OVM grade a season ago was nearly identical to the one he earned on Monday, at 22.41. For better or worse, Jackson’s first grade of the 2021 season was a continuation of his 2020 grades.

Furthermore, Jackson’s Week 1 struggles don’t guarantee that the same will happen next week. As evidence, take a look at the chart below. It shows Jackson’s OVM grades from each week of last season, marked by the black dots. For comparison, the yellow line represents the regular season average grade for quarterbacks in 2020. 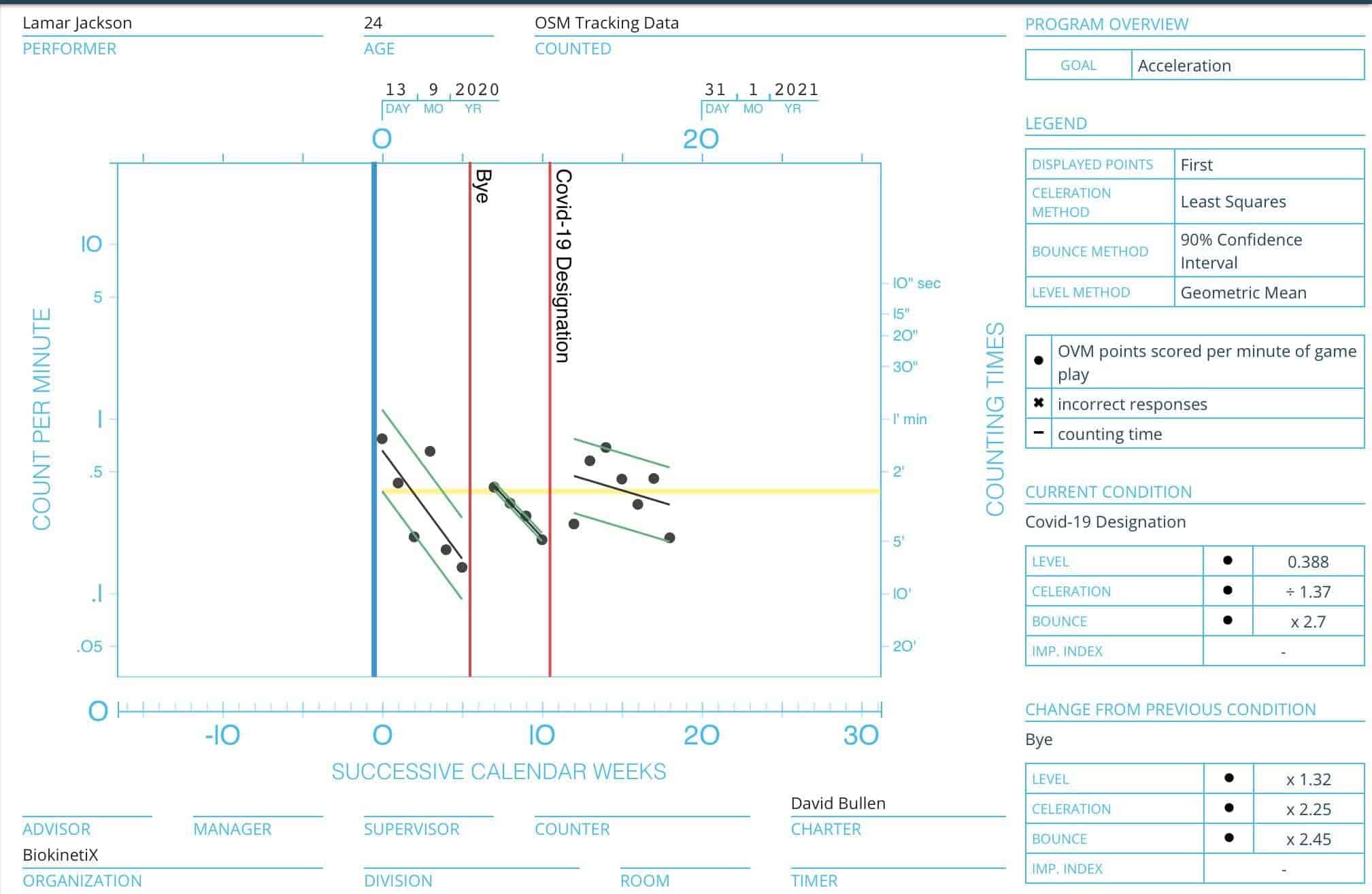 Jackson’s grades ranged from a spectacular 45.91-point performance in Week 1, which ranked ninth among all quarterback grades in 2020, all the way down to a grade of 8.43 in Week 6.

Predicting how Jackson will perform as a passer on any given week has proven to be an impossible task. Despite his mediocre performance on Monday, Jackson may come out firing against the Kansas City Chiefs this week.

Of course, the Ravens are well aware that a quarterback peaking at just the right moment can propel a team to otherwise-unattainable success. After all, that’s precisely what happened with Joe Flacco back in the 2012 NFL Playoffs.

If Jackson gets on a hot streak in the postseason, Baltimore might be unstoppable.

If the Ravens want to win a Super Bowl, he must improve

Thanks to its rather bizarre ending, the result of the first Monday Night Football game of the season feels like something of a fluke. Most analysts still believe the Ravens will be a Super Bowl contender and that Las Vegas is merely a borderline playoff team.

And we know Jackson is capable of far better than what he showed against the Raiders. Still, if Baltimore wants to be a truly elite team, they will need Jackson to play closer to his peak on a more consistent basis.