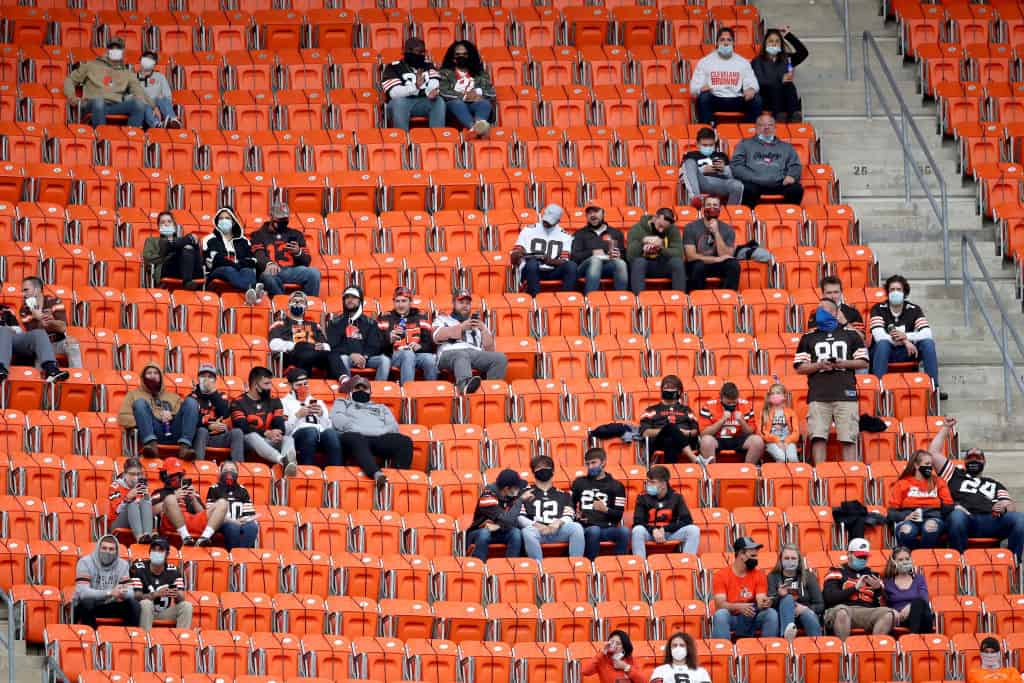 CLEVELAND, OHIO - OCTOBER 11: Fans looks on during the game between the Indianapolis Colts and Cleveland Browns at FirstEnergy Stadium on October 11, 2020 in Cleveland, Ohio. (Photo by Gregory Shamus/Getty Images)
What's in this article? Click to show
High winds hit the Cleveland area before the Ravens and Browns kickoff
The Ravens will rely on their run game no matter the weather in Cleveland
Browns and Ravens Weather Forecast | Expect a heavy dose of Nick Chubb for the Cleveland Browns
Want more fantasy football analysis and news?

With one final game remaining in Week 14, we shift our attention to the Baltimore Ravens and Cleveland Browns matchup, which could have some interesting weather. Tonight is the last chance for some of you to pull a Monday night miracle in fantasy football, but Mother Nature could have other plans. What is the weather forecast for Cleveland, and what impact could it have on the game?

Whoever is controlling the weather machine in Cleveland clearly has personal issues. The Browns haven’t had a home game with clear weather going back to Week 8. That seems like a decade ago in 2020.

The winds will be howling

Things don’t change when the Browns welcome their AFC rival Baltimore Ravens into town. For starters, this will be a chilly game on Lake Erie. While it might say it is 30-degrees, it will feel closer to 17-degrees on the field.

While Cleveland’s weather forecast is clear from a precipitation aspect, the wind will be the main talking point. This afternoon, winds will be sustained around 18 mph, with gusts reaching close to 30 mph. We should see this continue until 6:00 PM ET.

Luckily for us and the Ravens and Browns, the gusts should take a backseat before kickoff in Cleveland. Forecasted winds will still be around 16 mph for the game, but the high gusts should be out of the area by kickoff.

Due to the location and design, the Ravens and Browns kickers will be impacted the most by the weather in Cleveland

Given the stadium’s location on Lake Erie’s shores, FirstEnergy Stadium will always be more susceptible to winds than other places. There are no buildings or structures in place to block the wind coming to the stadium.

As a general rule of thumb, the typical threshold is 15 mph winds: the baseline for when we start to pay attention to any weather impact. The Ravens’ Justin Tucker and the Browns’ Cody Parkey will be impacted by this the most, especially if it swirls due to the stadium’s open corners and relatively low stadium walls.

If you play in the AFC North, by law, you have to be able to run the ball. That is what this division was built on, and it will be displayed during the Ravens and Browns game Monday, whether the weather is bad or not.

For the Ravens, the weather is the least of their concerns. They are built on their rushing attack and have four capable ball carriers.

It starts with Lamar Jackson, whose 669 rushing yards lead the team and is second among quarterbacks.

Then there is the three-headed split at running back. While maddening for fantasy, it is productive at the NFL level. Rookie J.K. Dobbins leads the ground, along with Mark Ingram and Gus Edwards.

Hopefully, tonight we can finally get an answer if J.K. Dobbins has taken over this backfield. In his last two games, Dobbins has 26 carries for 141 yards and two touchdowns. While last week was his first back from the reserve list, the snap and touch count was maddening. The split was Dobbins 11, Edwards seven, Ingram seven, and Justice Hill one. The snaps were Dobbins 21, Edwards 18, Ingram 11, and Hill with six.

With the Ravens averaging 32.66 per game, hopefully, the majority go to Dobbins tonight. He presents the highest upside of all ball carriers and is their best back in the passing game.

Sitting just 0.33 rushing attempts behind the Ravens are the Cleveland Browns, who have the best 1-2 running back room in the NFL.

Since making his return from IR in Week 10, Nick Chubb has been fantastic. He is the RB5 in PPR and, over the last four games, has the second-highest rushing total in the NFL (464). He is averaging 18.6 PPR points per game, and it’s hard to see how the Browns would go away from him even if the weather in Cleveland was going to be perfect.

The Browns can run too, but can they throw if they have to?

While Baker Mayfield is coming off a great performance where he slid into a QB3 finish, I don’t think we see that happen tonight. It’s not because of Cleveland’s weather, but because the Browns need to keep the Ravens’ pressure from getting to him.

Of the 40 quarterbacks who’ve dropped back 100-plus times, Mayfield’s 32.0 QB rating when under pressure ranks as the third-lowest in the NFL. However, if he is in a clean pocket, his passer rating skyrockets to 115.9.

The last time these teams played it was Week 1. Mayfield threw a season-high 39 times with just 21 completions, 189 yards, and one touchdown. That was the first game with a new coach and coming off a reduced offseason program. They have installed more play-action into the system and have gotten Baker out of the pocket, where he is his best.

I expect a heavy dose of the running attack to open up the play-action tonight. That should help keep the Ravens defense honest and get Mayfield into favorable situations.