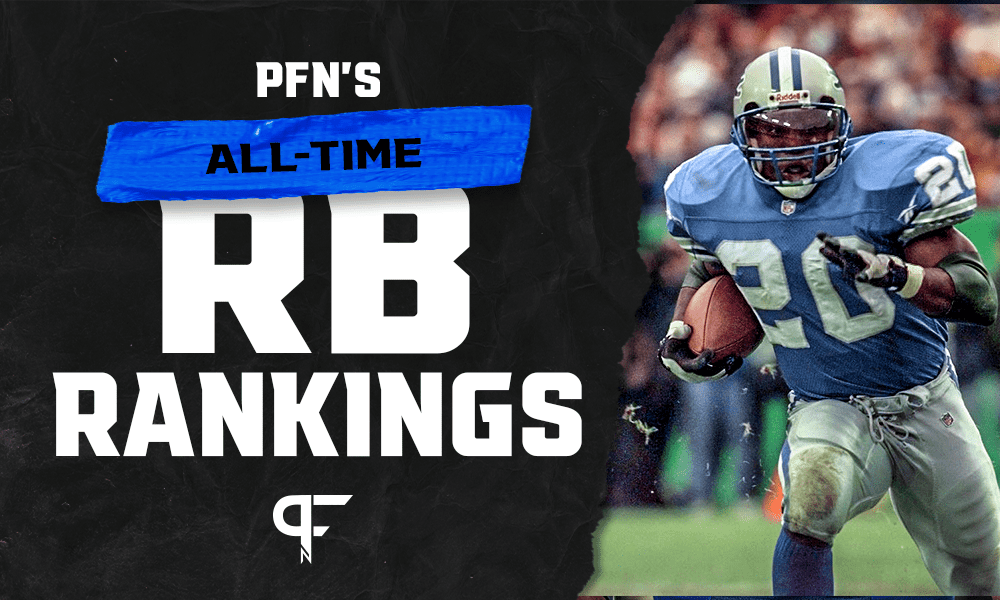 Top 11 running backs of all time from Barry Sanders to O.J. Simpson

All five of the best running backs in NFL history had attributes that made them impossible to leave on the outside looking in. Whether it be violence or ballerina-level elegance, these current and future Hall of Fame runners are a different breed.

Since I’m somewhat young and had numerous traumatic brain injuries, Barry Sanders memories escape me. My generation’s Sanders was LT — the most electric player in the league during his time, and I don’t believe it was particularly close.

Tomlinson scored an NFL-record 28 touchdowns in 2006. He was as explosive and fluid as they come, and he even had a season catching 100 passes in 2003. The 5-foot-10, 221-pound back could do it all as a runner. He had the power to devastate defenders with a stiff arm and the speed to break away. Most of all, he possessed a devastating ability to change direction.

But wait, there’s more! He also THREW 7 career touchdowns. That puts him at 169 touchdowns in 170 career games. Tomlinson’s ability to find the end zone makes him one of the top running backs in NFL history.

“All Day” is the angriest runner I’ve ever seen with the ball in his hands, and thus, one of the best running backs of all time. I’ll never forget where I was in 2012 as I watched him attempt to break Dickerson’s single-season rushing record. I was supposed to be bowling, but I couldn’t take my eyes off what had to have been a 12-inch television screen.

Adrian Peterson is used to narrowly missing out on unbelievable feats. He holds the single-game rushing record at 296 yards, just 4 shy of a darned good number for a quarterback to pass for.

What makes Peterson legendary is that 2012 season. This man tore his ACL on December 24, 2011, and ended up being the first running back to win the MVP since Tomlinson in 2007. No back has done so since, either.

During his 10-year stint in Minnesota, Peterson averaged 95.5 yards per game and 4.9 yards per carry. There was nothing he couldn’t accomplish as a runner. But, unfortunately, his bruising style began to break down his body, and injuries took away some of his all-time production.

Any of the top three running backs on this list have an argument for the top spot. When I told my father I’d be writing this piece, Walter Payton was the name he brought up as one of the best all-time running backs. “Sweetness” blended elite ability and longevity to make himself the NFL’s all-time leading rusher before Smith passed him.

Payton had 10 seasons of at least 1,500 yards from scrimmage, with four of those being over 2,000 yards. He was explosive, powerful, and elusive. He had the balance and the determination to shed, spin off, or run through tackles. He’s not just one of the best running backs of all time — he’s one of the greatest players in NFL history. It’s what makes the top three on this list so difficult to place.

Jim Brown’s reputation precedes him. Nobody in the PFN offices was alive to watch Brown play football, but that doesn’t matter. He’s one of the most impressive players in the sport’s history. Not only is Brown one of the best running backs of all time, but he’s also one of the top five or so players in league history.

So often, we think about era adjustments and talk about how the modern game has better athletes. That would probably be 100% true if Brown didn’t exist. Brown transcends era. He could be dropped into the 2021 NFL season with a time machine and survive. If he would have grown up in modern times, who knows what kind of monster could have been developed with modern diet and training.

In addition, we often talk about the “what if” with Bo Jackson. Well, Brown might be that answer.

Brown was a different class of athlete. In his nine-year career, he was an eight-time All-Pro. However, at age 29, Brown retired to pursue a career in acting, just like that. He had that career, all before turning 30.

Sanders was an artist on the field. Not even Tomlinson’s movements come close to matching the elegance of Sanders. Only a healthy Saquon Barkley has flashed the “how did he just do that” style of Sanders, but Sanders wasn’t a 6-foot-2, 230-pound freak of nature. We may never see someone move the way he did ever again in the NFL.

Sanders was one with the turf. He was the move he was about to make. There was no thought or preparation in his movements, just action. Sanders was the ultimate improvisation actor. He was a magician. Sanders was everything, and then like Keyser Söze, just like that, poof, he was gone.