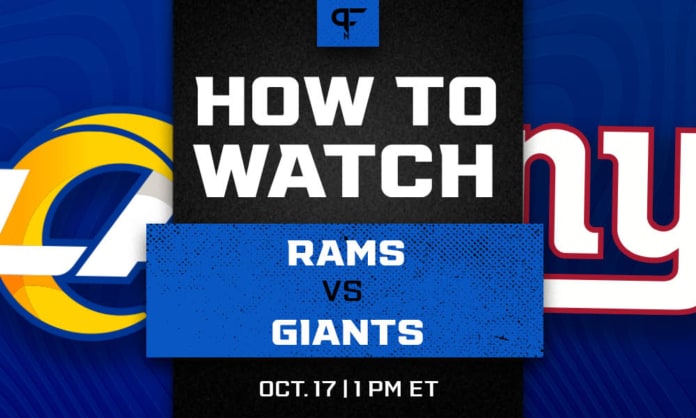 Rams vs. Giants prediction, pick, odds, and how to watch the Week 6 game

Follow along for all the pertinent information for the Rams vs. Giants game, including betting odds, channel options, and a prediction.

It’s still early in the 2021 season, but this is the time of year where momentum can start to settle in certain places and slip away for other teams. The Rams and Giants are on opposite ends of that equation. Can New York get back on track in Week 6, or will Los Angeles continue to dominate? Here’s everything you need to know about the Rams vs. Giants clash, including NFL odds, channel options, and a prediction.

The Rams and Giants are two teams heading in vastly different directions. Los Angeles is 4-1 and coming hot off a win against the Seattle Seahawks in prime time. They may be second to Arizona in their division, but they’re right in the playoff hunt. The Giants, meanwhile, are 1-4 and battling injuries as they round out the back of a weak NFC East.

Against the spread, these teams are a little bit closer. The Rams are 3-2 ATS on the year, while the Giants are 2-3. But in this case, the spread lies a bit. Los Angeles and New York aren’t truly a game apart. When you compare their rosters, their coaching, and their quarterbacks, the Rams come away with an advantage in each category.

The spread does well to quantify that gap in both talent and oversight. But there’s another factor to add to the equation as well. Giants starting quarterback Daniel Jones left the team’s Week 5 game with what seemed to be a severe concussion. His status could be in doubt in Week 6. If he can’t go, it’ll be up to Mike Glennon to keep up with a red-hot Rams passing attack.

In that scenario, 10.5 points almost seem generous for the Giants.

Even if Jones is healthy, the Giants still face a steep challenge in Week 6 against the Rams. Not only is Jones’ status uncertain, but key offensive playmakers Saquon Barkley and Kenny Golladay also suffered injuries in New York’s Week 5 loss to Dallas. If Glennon ultimately starts, he’ll be without two of his top weapons, and he’ll be standing behind an oft-maligned offensive line that’s also suffered from injury this year.

Kadarius Toney caught fire last week, but the Giants need more if they’re going to go up against the Rams’ defense. While things haven’t been perfect for Los Angeles in the wake of Brandon Staley’s departure, Aaron Donald and Jalen Ramsey might constitute the best defensive tandem in the league. Ramsey, in particular, is an eraser in the secondary who can match up with just about anyone. If the Giants have fewer options available due to injury, that makes it easier for their conservative attack to be suffocated.

Now let’s move to the other side of the ball. The Giants’ defense, which was supposed to be the team’s strength, has allowed the fourth-most yards per game in 2021. The interior line remains strong, but the secondary hasn’t meshed, and the loss of Blake Martinez has proven costly. The Rams simply have too many weapons, and behind a stalwart offensive line, Matthew Stafford has been a stark upgrade from Jared Goff.

Normally, it feels risky to bet in favor of a double-digit spread. That’s a lot of ground to cover, even for the most lopsided matchups on paper. This time around, however, it seems like a reasonable bet to make. The Rams are one of the league’s most talented teams. The Giants, even when healthy, are a of couple steps below them. And if Glennon starts, that only emboldens the mismatch.

Early on, the Rams vs. Giants prediction already feels like a cover for Los Angeles. If Jones is confirmed out at some point this week, the spread may widen. Even then, I think there’s a good chance the Rams can direct this one and extend past the spread. Perhaps Glennon can earn some garbage time points late, but Los Angeles should be able to attain and maintain control.

How to watch and listen to Rams vs. Giants this week