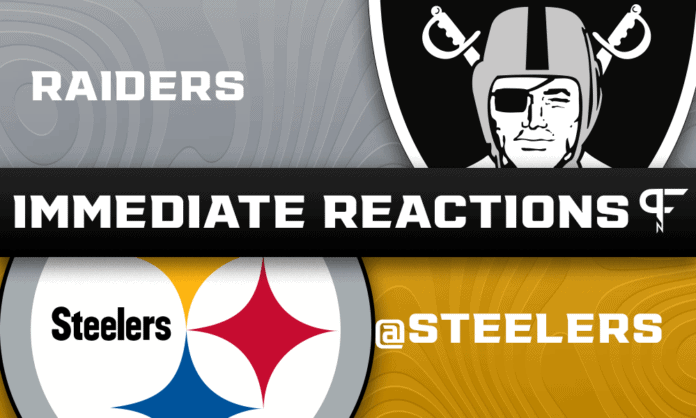 Raiders vs. Steelers was filled with injuries -- here are the highlights, score, and observations from the contest.

In a contest between two battle-tested head coaches, the Las Vegas Raiders got the better of the Pittsburgh Steelers, 26-17. Neither team came out of this game clean as both sustained injuries and scares. But the Steelers were hit particularly hard both with injuries and in the loss column.

Observations from the Raiders vs. Steelers game

What were the biggest takeaways from this AFC West vs. North clash?

All-Pro defensive end T.J. Watt exited the game in the second quarter with a groin injury and did not return. Watt’s exit was predated by fellow defensive lineman Tyson Alualu leaving the game with a fractured ankle. Making matters worse, WR Diontae Johnson laid on the ground as the televisions faded to black, injuring his knee on the final play of the game.

Raiders’ first-round pick Alex Leatherwood exited as well, officially declared out with an oblique injury. Leatherwood is the latest in the line of offensive line injuries for the Raiders after Denzelle Good was lost for the season in Week 1 with a torn ACL.

Despite the ugly nature of the injuries, the game went on. And players flashed.

Pittsburgh rookie RB Najee Harris will certainly grab the headlines after tossing Raiders S Johnathan Abram with a powerful stiff arm. And rightfully so. He finished the game with 81 total yards and a touchdown on 15 touches despite playing behind a suspect offensive line.

There were several other highlight-reel moments, but it didn’t start that way.

The Steelers’ opening-drive woes continued. They’ve now recorded 12 straight game-opening drives without points. That stands as the longest active streak in the NFL. Their last scoring drive to open a game came in Week 7 of last season against the Tennessee Titans.

Raiders struggle to run the ball without Josh Jacobs

The Raiders weren’t immune to sluggish play either. Their rushing attack lacked clear balance and star power without back-to-back 1,000-yard rusher Josh Jacobs. Attempting to replace the former first-round pick, Peyton Barber and Kenyan Drake combined for 20 carries and just 41 yards, most of which came on the final drive of the game that iced it.

With their struggles on the ground apparent, the Steelers forced Raiders QB Derek Carr to beat them. And beat them, he did. Entering the contest averaging 311.5 yards per game in his career against the Steelers, Carr threw for 382 yards and 2 touchdowns.

At one point, Carr completed 10 straight passes, and the confidence grew. He now has four straight games with at least 325 passing yards dating back to last season.

Pittsburgh largely shut down Pro Bowl TE Darren Waller but Carr was able to find 7 other receivers, including perhaps a breakout performance from second-year WR Henry Ruggs. Beating his corner deep, Ruggs hauled in a 61-yard touchdown that pushed the Raiders lead to two possessions early in the fourth quarter.

Carr has now thrown for 817 yards and 4 touchdowns to open the year against AFC North opponents. The Raiders have started 2-0 in back-to-back seasons but certainly feel like a better team than last year’s 2-0 unit.

Las Vegas’ struggles in pass coverage from 2020 may be behind them. Veteran additions to the secondary and more experienced play from youngsters are paying dividends. Vegas limited Ben Roethlisberger to just 7.3 yards per attempt and a single touchdown.

Their pass rush will be a fearsome unit all season as long as Maxx Crosby stays healthy.

The Raiders will now turn their attention to the Miami Dolphins as they return to the desert in Week 3. Pittsburgh will look to reset and play a full four quarters against division foe Cincinnati next week.