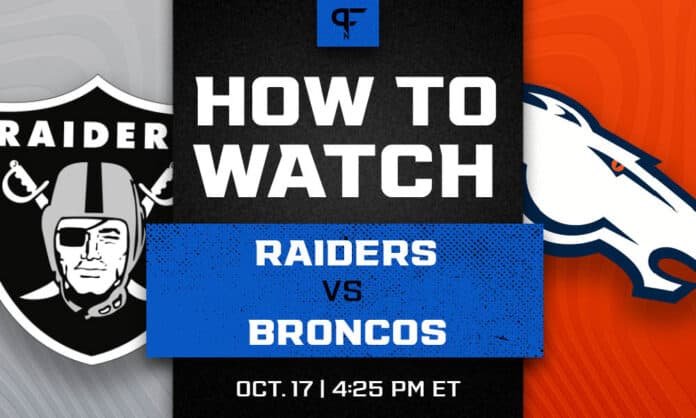 Raiders vs. Broncos prediction, pick, odds, and how to watch the Week 6 game

What is our prediction for the Raiders vs. Broncos Week 6 matchup, what are the latest odds, and what channel can you watch the game on?

This Sunday’s Las Vegas Raiders vs. Denver Broncos matchup has been slowly getting harder to make a prediction for over the last two weeks. With both teams on a two-game losing streak, let’s take a look at the current NFL odds, what channel to watch the Raiders vs. Broncos game, where you can listen to it, and our early pick for how it may turn out.

Both the Broncos and Raiders have been on a roller coaster in the first five weeks of this season, making this a tough prediction to make. Both teams started 3-0 but have fallen back to 3-2 with disappointing losses.

The Raiders have been through the wringer these past two weeks

The Jon Gruden saga has further complicated the Raiders’ season. With Las Vegas’ organization having gone through a complete upheaval in the last week, getting their focus on a trip to Denver will be tough. However, an event such as the departure of a head coach can have a galvanizing effect on the team.

Las Vegas heads into Denver with interim head coach Rich Bisaccia in charge, looking to reverse some concerning trends. Through three weeks, the offense was humming, with over 350 passing yards per game. The last two weeks have seen that drop to below 200. On defense, the pass defense has been stout, but their run defense is a major concern.

The Broncos have struggled as the schedule has gotten tougher

Denver also had a strong 3-0 start, but their record always looked flimsy given the opposition — the Giants, Jaguars, and Jets have two wins combined. The manner of the losses to the Ravens and Steelers has made a prediction for this Broncos vs. Raiders game taxing.

Their struggles on offense the past two weeks could have a relation to the concussion for Teddy Bridgewater. Firstly, Bridgewater had to come out of the game in Week 4, leaving Drew Lock to marshall the offense for the first time this season. Then, Bridgewater missed most of practice in Week 5, and it took time for the offense to click against the Steelers.

With everything that has happened in the past two weeks, it is no wonder there is a lack of clarity in the odds for this Raiders at Broncos game. The Broncos being 3.5-point favorites is as much due to home-field advantage as it is a skill difference. The trouble for the sportsbooks is that the impact of the Gruden situation is impossible to account for.

The Raiders’ offense has been a major concern the past two weeks, but now they go up against a Broncos defense that has allowed an average of just under 400 yards on average in the past two weeks. However, the Raiders will also need their run defense to step up. They currently rank as the sixth-worst in the league in yards per rushing attempt.

The Broncos will hope that a full week of practice for Bridgewater will make all the difference. After he struggled in the first half against the Steelers, he clicked into gear a little more in the second half. Combine that with the potential to exploit the Raiders’ run defense with Melvin Gordon and Javonte Williams, and this could be a good day for the defense.

How to watch and listen to Raiders vs. Broncos this week