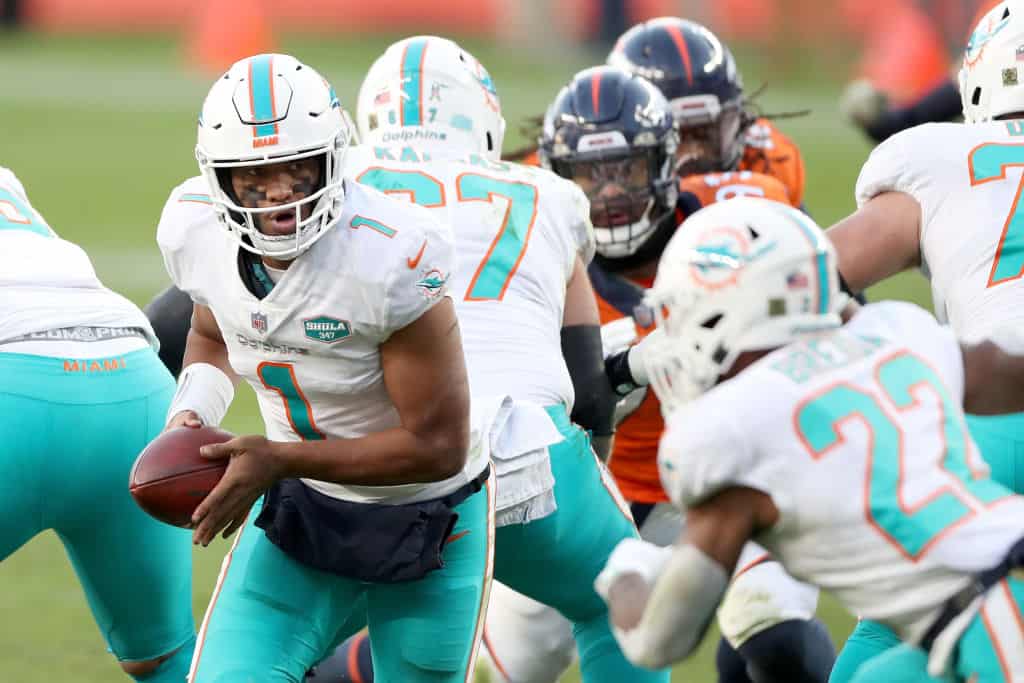 DENVER, COLORADO - NOVEMBER 22: Quarterback Tua Tagovailoa #1 of the Miami Dolphins hands off the Matt Breida #22 during the third quarter against the Denver Broncos at Empower Field At Mile High on November 22, 2020 in Denver, Colorado. (Photo by Matthew Stockman/Getty Images)
What's in this article? Click to show
Week 13 Fantasy QB Injury Report: QB injuries and injury question marks this week
Other quarterbacks that we will need to monitor
Want more fantasy football analysis and news?

Entering Week 13, one of the most crucial weeks of the fantasy football season, the QB injury report is growing, including names such as Daniel Jones and Tua Tagovailoa. If you are going to have success this week in fantasy, nailing your starts and sits will be critical, and given the potential value a QB can offer, it is essential to know which players will be available for you. Which QBs are on the injury report this week, and who should you be lining up replacements for this week on the waiver wire?

Tua Tagovailoa’s thumb injury could keep him out another week

Tua Tagovailoa’s left thumb injury, which happened last Wednesday and caused him to miss the Jets game, appears to be progressing better than reports early on Sunday indicated. The Dolphins will further evaluate Tua’s thumb when he returns to practice on Wednesday before making a final decision. However, there is a bit more to this situation than just the injury Tua Tagovailoa is dealing with. According to head coach Brian Flores, during the Week 11 matchup against the Denver Broncos, Tua was benched for his play. Flores did add that Tua Tagovailoa will be the starter moving forward once he is injury-free.

While Flores has declined to speculate on Tua’s availability in Week 13, he did tell reporters Sunday that “it was very close to [Tua] being able to go [against the Jets], but we have to make good decisions for him as well. We’ll see how he does over the course of this week in practice.”

For fantasy, this is a tough situation. On the one hand, you want to see Tua succeed, which will only happen with time in the game. On the other hand, this offense looks better with Ryan Fitzpatrick under center, and he brings more value to players like Devante Parker, who just had his best game of the season. With Tua under center, Parker has never finished above WR39. With Fitzpatrick, Parker has been a WR2 (top-24) or better in five of their seven games together, including a WR11 finish in Week 13. I feel more confident in my start sit decisions surrounding the Dolphins players with Fitzpatrick under center for right now.

The Giants might have won in Week 12, but it came at a steep price. QB Daniel Jones suffered a hamstring injury on a run in the third quarter of Sunday’s game. He tried to return later in the game but lasted just two plays. He could not drop back and step into a throw, and backup QB Colt McCoy came into the game to guide the team to a narrow escape with a 19-17 win over Cincinnati.

NFL Network Insider Ian Rapoport reported that sources tell him Daniel Jones underwent an MRI, and results show that he avoided any major damage with his hamstring injury but has an “outside chance” to play on Sunday.

Right now, coach Joe Judge said there are more questions than answers, and they are in “wait-and-see mode” because it’s natural for there to be swelling and tightness the day after an injury.

When McCoy came into the game, the pass catchers took a major dive in productivity. He completed 6 of 10 passes for 31 yards with no touchdowns and no interceptions. Darius Slayton also finished the game with zero receptions for the first time in his career. If this injury forces Daniel Jones out, I am very nervous about Giants’ pass catchers other than Evan Engram.

Other quarterbacks that we will need to monitor

One of the bright stars in the NFL and fantasy football did not look like himself on Sunday. Kyler Murray completed 23-of-34 passes for just 170 yards, no touchdowns, and one interception. He also rushed five times for 31 yards in a 20-17 loss to the Patriots in Week 12. This was by far Murray’s worst performance of the year, finishing as the QB25 in fantasy. Only one other time in his carer had he failed to score double-digit fantasy points.

There is some thought that the shoulder injury he sustained in Week 11 against the Seahawks is to blame for this odd performance. Murray’s inaccuracy, along with his unwillingness to run, made it look like he was trying to manage the situation even though the shoulder was clearly limiting him. You can take this same thinking and see why Kenyan Drake had a great day with two rushing touchdowns. Normally, an injury-free Kyler Murray is taking at least one of those.

We will have to wait and see if the Cardinals’ QB pops up on the injury report for Week 13, but even if he does, there are very few players in the NFL who you would choose over him in a start sit fantasy decision.

Update Saturday, December 5: Josh Allen was a full participant in all three days of practice and carries no designation into the Buffalo Bills Monday Night Football matchup against the San Francisco 49ers.

The Bills and fantasy GMs might have dodged a bullet when QB Josh Allen was taken down by Chargers DE Joey Bosa and had his leg twisted. Allen was in obvious pain at the time and required medical assistance. However, he was able to walk off under his own power, thankfully. Amazingly, Josh Allen was only out for one play before returning to the field.

I have no idea how he avoided any serious injury because it does not look good when you watch the play. There have been conflicting reports whether it was his ankle that was injured or his right knee. It is worth noting that you can see Allen had on a knee brace under his pants and socks that was not there when the game started.

Allen did not have a great day, and it is possible the injury played into it. He completed 18-of-24 passes for 157 yards, one touchdown, and one interception. Allen also rushed for 32 yards and another score, though he also lost a fumble. Allen spent most of the time checking down to his running backs, and the Bills also ran the ball a lot, which they haven’t been known for this season. We will have to wait and see the official injury for Josh Allen when the Bills Week 13 injury report comes out. Still, unless he is ruled out, Allen is a QB1. Although, a matchup against a San Francisco 49ers defense will test his mobility.

Will Lamar Jackson be back in Week 13?

Update: Lamar Jackson is expected to be activated Sunday.

According to NFL Network’s Tom Pelissero, Lamar Jackson has a possible chance to be cleared in time for the game against the Dallas Cowboys, which has now been rescheduled for Tuesday, December 8th.

There are a lot of moving pieces here after Jackson’s positive test. Everything from the mandatory isolation period for 10 days following the positive test to when he is finally testing negative. Fantasy Managers were already forced to sit Jackson this in Week 12, and it is too early to sell if he will be able to be started in Week 13 until we see an update to the team’s lengthy injury report. So long as Robert Griffen III is in at QB, the entire team is downgraded, and even players like Marquise Brown become subject to difficult fantasy start sit decisions.

Update Sunday, December 6th: Lock has been activated and will be the starter for the Broncos game against the Kansas City Chiefs.

Thankfully, Lock has tested negative (he was never positive but was deemed a close contact) and should be back for the team in Week 13 against the Kansas City Chiefs. However, I cannot recommend trusting Lock in your lineups with each game being so critical at this point in the fantasy season.

Breaking down the Jets / Jaguars NFL Draft tiebreaker: How each team can end with No. 1 pick

Jim Caldwell Coaching Profile: Prior experience and interest rumors for 2021 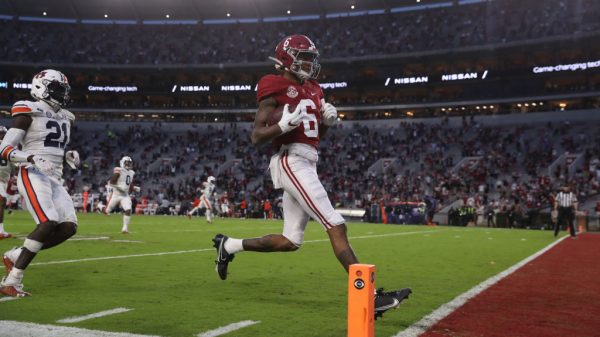 With the playoff race heating up and the draft order beginning to settle, who does your team select in this 3-round 2021 NFL mock... 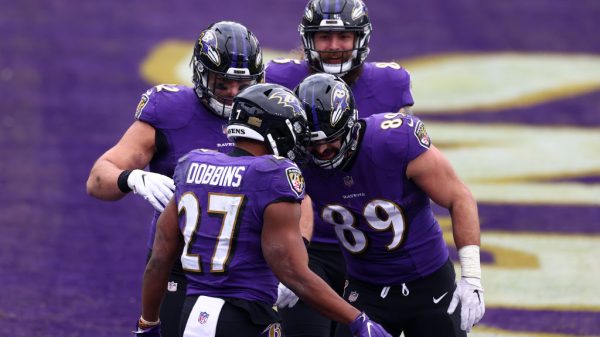 After ranking all 32 teams in our Week 16 NFL Power Rankings, we have a better idea of who the best and worst teams... 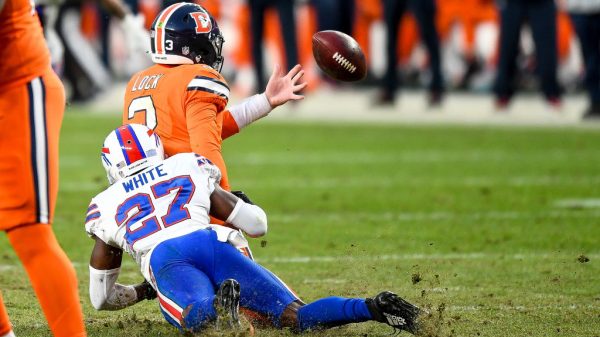 Looking at the Denver Broncos and Drew Lock's performance from last night, it is clear that the team needs to make a decision about... 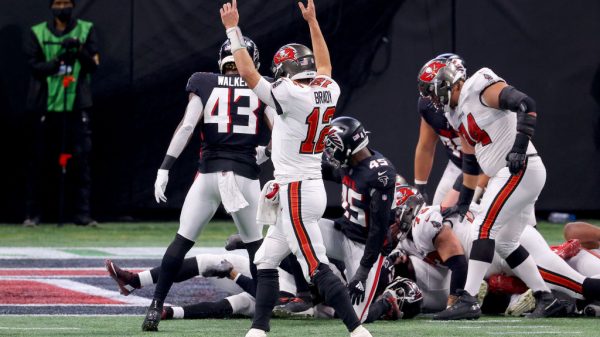 Heading towards Week 16, the 2020 NFL playoff picture & race is coming into focus, but who made a move up the standings in...

After ranking all 32 teams in our Week 16 NFL Power Rankings, we have a better idea of who the best and worst teams...