PRO FOOTBALL NETWORKThe NFL is fast. PFN is faster.
More
Facebook
Twitter
ReddIt
Linkedin
Email
What's in this article? Click to show
Deon Cain will be catching passes from Ben Roethlisberger this season
Dan McCullers could be back in the defensive line rotation
Curtis Riley could replace one of the backup safeties

The Pittsburgh Steelers have finalized their practice squad for the 2020 season and there were a few surprises that were unexpectedly “demoted” rather than making the 53-man roster. A total of 15 players have so far been added to the practice squad over the weekend. Although there will be several of those players that spend the entirety of the season waiting and hoping for a call-up, a few players will find themselves on the main roster, with a chance to make a lasting impact, sooner rather than later.

Deon Cain will be catching passes from Ben Roethlisberger this season

Deon Cain being designated to the practice squad was somewhat of a shocker. Cain was picked up by the Steelers after being waived by the Indianapolis Colts, where he started three games in 2019.

The main reason why Cain was assigned to the practice squad was that Pittsburgh only kept five receivers on the main roster, sitting comfortability with Eric Ebron, who could potentially line up at receiver in certain situations.

Related | How will the Steelers defensive depth chart look in 2020?

If something were to happen to any of the receivers on the roster, Cain will be the next man up. It’s just a matter of time before he makes his season debut.

Dan McCullers could be back in the defensive line rotation

McCullers played in all 16 games for Pittsburgh last season and played in 15 games back in 2018, so this was a move that didn’t seem to make much sense.

The Steelers gave the starting nod at nose tackle to rookie seventh-round pick Carlos Davis out of Nebraska, who impressed immensely in camp. Even with the fact that Davis stood out, it is shocking that McCullers, who has been a feature in the rotation for two seasons, didn’t even get some sort of backup role.

Where would Dan McCullers fit in?

One player that did stay on the main roster was Tyson Alualu, and his versatility on the defensive line can be cited as the reason for that. While McCullers is strictly a nose tackle in the Steelers’ 3-4, Alualu can play both nose tackle and come off the edge, while also being used in heavier front sets.

Related | What were the surprise moves on the Steelers 2020 53-man roster?

McCullers is a more advanced nose tackle than Isaiah Buggs is a defensive end, but again, because Alualu can come in for Davis should something go wrong, that allowed Pittsburgh more flexibility off the edge rather than up the middle.

All that being said, don’t be shocked if McCullers is the first lineman called up to the roster should one of the lineman go down with injury or is jus simply underperforming.

Curtis Riley could replace one of the backup safeties

Curtis Riley was signed from the Las Vegas Raiders this off-season and expectations entailed the fourth-year safety filling the role as the backup, who could get some snaps in nickel and dime sets.

He played in all 16 games for the Raiders in 2019, as he did in 2018 with the New York Giants. Therefore, it was somewhat of a surprise that he didn’t make the roster just simply for his experience.

Which safties are penciled in as the Steelers’ backups?

The current two backup safeties are Marcus Allen and Jordan Dangerfield. Allen has been one of the more impressive players in Steelers camp, taking reps at safety and linebacker as Pittsburgh looks for more opportunities to put him in the box.

Related | What will the Pittsburgh Steelers offensive depth chart look like in 2020?

Dangerfield is the wildcard that could be swapped with Riley. Dangerfield has been with Pittsburgh on and off since 2014, appearing in just three games over that span. The more proven Riley will get a lot of attention during practice and will quickly impress. Therefore, could see a short leash for Dangerfield is he makes frequent mistakes, leading Riley to get the call-up. It will also be interesting to see if that experience leads to Allen being one of the four players on the practice squad that the Steelers can protect each week. 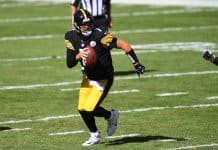 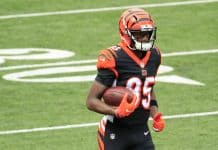