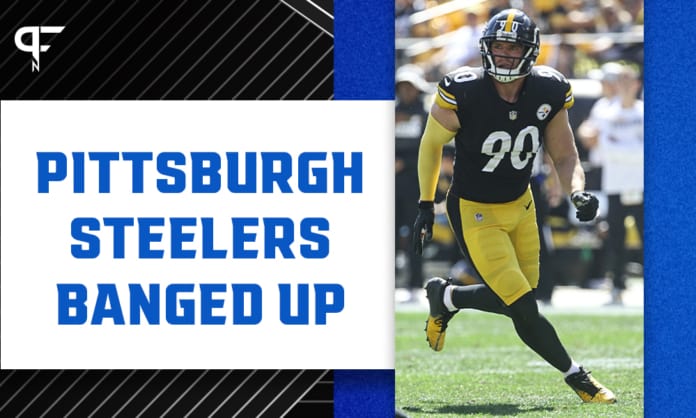 The Pittsburgh Steelers placed defensive lineman Tyson Alualu on IR Monday, but that was just the beginning of their injury issues. Star pass rusher T.J. Watt’s status for Sunday’s game against the Bengals is very much in question after he left Pittsburgh’s Week 2 loss to the Raiders with a groin injury and did not return.

NFL Network reported Watt avoided major injury and hasn’t been ruled out of the Cincinnati game. Yet, he isn’t exactly 100% either. Watt tweaked his groin relatively early in the game. He logged just 16 snaps but managed a sack and 4 tackles before leaving for good.

Those weren’t the Steelers’ only worries coming out of their battle with Raiders. Wide receiver Diontae Johnson also got banged up, but his knee injury is not considered serious. Johnson played nearly the whole game Sunday (49 of a possible 56 snaps) and was fantastic. His 9 catches led all receivers.

Alualu reportedly underwent surgery Monday after fracturing his ankle on the Steelers’ fourth defensive snap of Sunday’s game. The expectation is he will not return in 2021.

That’s a big blow to a Steelers defense that the Raiders exposed. Las Vegas lit up Pittsburgh for 26 points and 425 yards, the vast majority of which the Steelers surrendered through the air.

It’s hard to see how that defense will get much better without its best nose tackle. At 34, Alualu might have been getting a little long in the tooth. However, he was still good for 53 snaps in Pittsburgh’s opener, contributing 5 tackles and a quarterback hit.

With Alualu gone, Isaiah Buggs is presumably in line for a promotion. The former sixth-round pick’s usage tripled from Week 1 to 2, but ominously, he didn’t record a single stat.

As for Watt, any time missed will hurt the Steelers both on the field and in the wallet. He’s just two games into a four-year, $112 million contract extension.

Watt is an incredible player, as evidenced by his impressive body of work — including 3 sacks and 2 forced fumbles on 85 defensive snaps this year.

If there’s a silver lining, it’s this: Melvin Ingram looks to have something left in the tank in Year 10. He has a sack and 3 pressures on the young season. Ingram and Alex Highsmith will presumably start if Watt misses any time.

Pittsburgh’s offense would have been significantly diminished had Johnson suffered a major injury. He’s been Ben Roethlisberger’s go-to receiver early in the year, connecting on 14 completions for 141 yards and a touchdown — all of which are the most on the team.

“Appreciate everyone for the checkups!” Johnson wrote on Instagram. “The comeback gone be even greater!”

If Johnson cannot go Sunday, James Washington — who has been unhappy with his usage in Pittsburgh — is in line for an increased role.