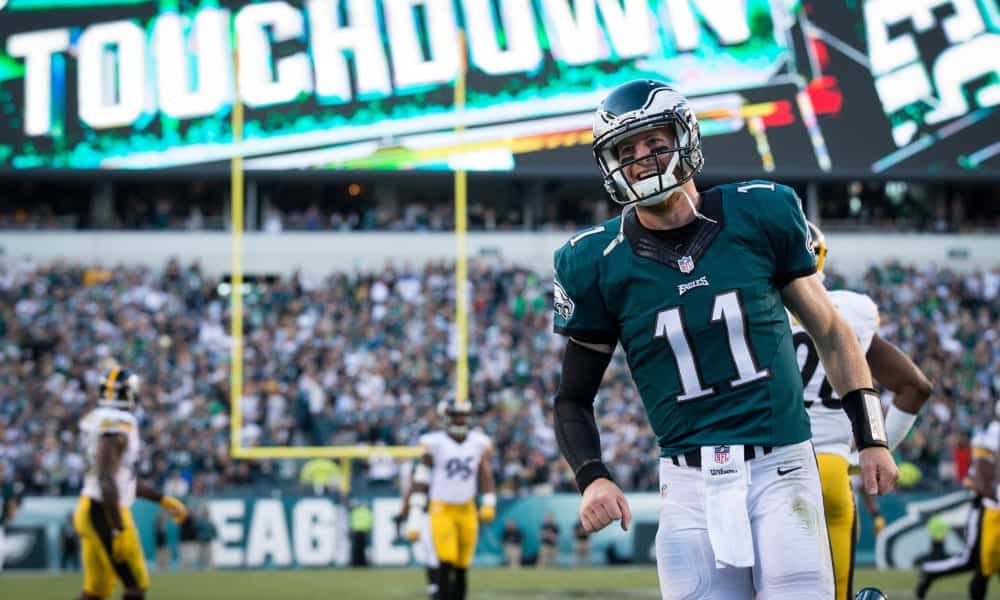 Credit: Usa Today
What's in this article? Click to show
The Philadelphia Eagles have been one of the NFL’s most exciting franchises as of late. The resurgence of the Eagles franchise started on April 20th, 2016. On that day the Eagles traded up six spots in the 2016 NFL Draft to select Carson Wentz.
2016 Draft
2016 Season
2017 Season
2018 Season
Wentz’s Impact on the Eagles

The Philadelphia Eagles have been one of the NFL’s most exciting franchises as of late. The resurgence of the Eagles franchise started on April 20th, 2016. On that day the Eagles traded up six spots in the 2016 NFL Draft to select Carson Wentz.

In return, the Eagles got the 2nd overall pick and a 2017 fourth rounder. The Eagles gave up a lot of both present and future assets hoping that Wentz, the then North Dakota quarterback, will be the franchise QB.

Wentz had high expectations coming into Philly, and most Eagles fans will say he has met those.

#Eagles have agreed to a trade with the Cleveland Browns to acquire the second-overall pick in the 2016 NFL Draft. pic.twitter.com/SdJSegMy4m

Wentz’s rookie season was not as spectacular as everyone hoped, but he did show some potential.

He threw for 3,782 yards, 16 touchdowns, 14 interceptions, with a 62.4 completion percentage, according to Pro Football Reference.

He led the Eagles to a 7-9 record.  Although his rookie season was average and showed potential, no one thought of what would happen next.

After a mediocre rookie season, Wentz and the Eagles took the NFL by storm.

Through 14 weeks, Wentz was the front runner for MVP, and the Eagles looked like Super Bowl favorites.

People were now convinced that he was the real deal and the Eagles were going to be a new team to beat in the NFC.

Unfortunately, he tore his ACL in week 14 against the Rams but back up Nick Foles led the Eagles to a Super Bowl Championship over the New England Patriots.

Coming off their first ever Super Bowl Championship, the Eagles were determined to prove they were not one-year wonders.

Wentz, on the other hand, wanted to show his spectacular season was not a fluke.

Even though he tore his ACL late in the season, the 26-year-old came back in week three of the season – he went on to play the next 11 games but had a disappointing 5-6 record.

Even though the record and stats may not be as good as they were the previous year, Wentz was a better player.

The Eagles team was decimated by injuries and had multiple backups playing and players playing in different positions. Wentz also dealt with back problems which caused him to miss the last three games and the Eagles playoff run.

Howie Roseman: “I gotta be honest, I have so much faith in Carson Wentz. This guy is going to be a great player for the Philadelphia Eagles for a long time.” ?https://t.co/4OTychwnmE

Wentz’s Impact on the Eagles

Throughout Wentz’s career, it has been evident that the Eagles only go as far as their quarterback can take them.

Nick Foles led the team through the playoffs the past two seasons. Now that Foles is gone and out of the picture, it will be up to Wentz to make this team succeed.

Wentz needs to prove he can stay healthy and get back to his usual self. If Wentz does get hurt, then the Eagles will be left without a solid quarterback as Nate Sudfeld and Clayton Thorson are the only other quarterbacks on the roster.

Wentz is the key to the Eagles success, and the team will only go as far as he can take them.