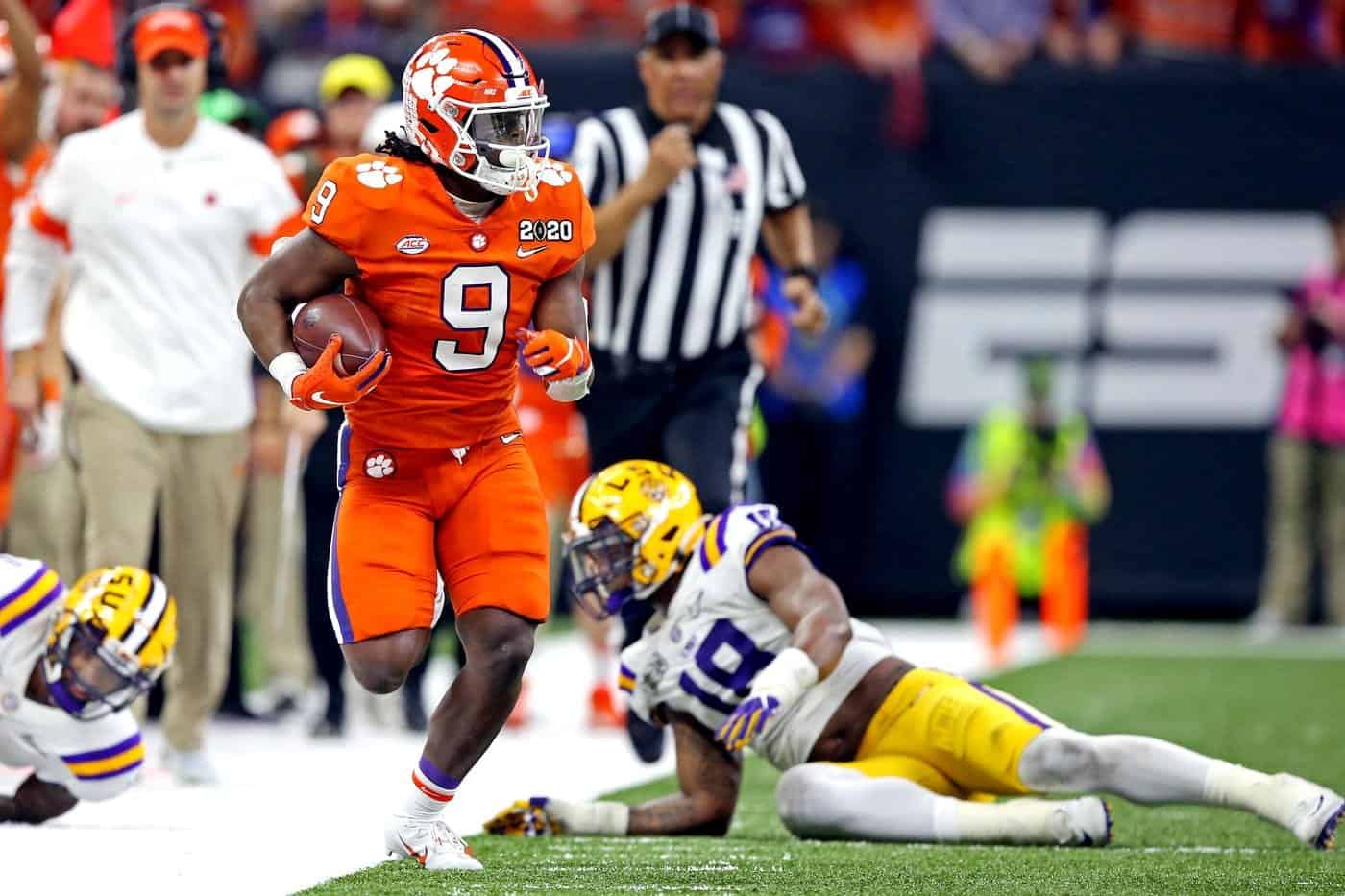 With June approaching and the college football regular season currently still on schedule, we got together a few of Pro Football Network’s best and brightest to bring you our first-annual PFN Staff 2020 Devy Mock Draft. For those unaware of how devy fantasy football works, take a look HERE for a detailed breakdown.

The 2021 rookie draft order and my devy rankings are sure to fluctuate between now and the 2021 NFL Draft, so we’ll make sure to bring you these mock drafts on a semi-consistent basis. We’re also making sure 2QB junkies get their fix, and you’ll be excited to know our next 2020 devy mock draft will be from a SuperFlex perspective.

Before we dive into our selections, take a peek at the randomized draft order and the participating PFN Staff. After each selection, each staff member will write-up an explanation on their draft pick.

The easy pick for me. Etienne would have been my RB1 if he had entered the 2020 NFL Draft. Trevor Lawrence will get all the headlines, and certainly, Justyn Ross will have his share of highlight plays, but Etienne and the running game is what puts Clemson over the top. When looking towards the NFL, you’d like to see him refine his receiving game a bit more. Nevertheless, Etienne can finish his senior season as pro-ready as they come.

Ja’Marr Chase is the WR1, and arguably, the top player in devy rankings. He outpaced his now-former teammate and 2020 first-round pick, Justin Jefferson, last year in a historic offense at LSU. In just 14 games, he was able to put up Michael Thomas on steroids type numbers last year with 1,780 yards and 20 touchdowns. Yes, I said TWENTY touchdowns. The film is just as fantastic as the stats, and this was an easy pick once Etienne came off the board.

I miss out on my Tier One targets Etienne and Chase, but pick 1.03 puts me in a position to choose between my RB2 or WR2. I have Hubbard, Moore, Bateman, and Harris grouped closely together in Tier Two, so I’d move down a few spots in an ideal world. With trading down not an option in this mock, I take dynamic redshirt sophomore Chuba Hubbard who finished 2019 with 2,094 rushing yards and 21 touchdowns on the ground.

While I did not expect Etienne or Chase to fall to me at the fourth position, I was more than pleased to see Moore here for the taking. Moore is my WR2 of this class behind only Chase, and there’s no reason to believe he won’t be an early pick in 2021 rookie classes with a stellar and injury-free 2020 season.

This was somewhat of an easy selection for me here as Bateman is close to the top-four if not quite in the same tier. A lot relies on Tanner Morgan being as good in 2020 when it comes to Bateman’s stock, but he is certainly talented enough to produce in the NFL.

When it comes to the top three backs in this class, you cannot go wrong. At 6-foot-3 and 224 pounds, Harris has the frame to be a true three-down workhorse back that will get the chance to show it at the next level.

He brings things to the field that a back of his size typically does not have in their toolbelt. Harris possesses the speed and elusiveness mixed with power and the willingness to take on a defender in pass pro. Also, he is a solid pass catcher and rather polished route runner out of the backfield.

The race for RB1 in 2021 will be incredible to watch. Harris will certainly get all the chances to show his skill set at Alabama this year as Matt Jones just doesn’t seem to be the answer in Tuscaloosa.

In the 2021 class, I view there to be four Tier One receivers. Once my top three receivers were gone, I knew I had to take Waddle. Waddle may have been the last of the four top receivers taken in this draft, but I think his fantasy upside is prominent. His ability as a dominant YAC receiver makes him scheme and positional versatile. He’s a great athlete, and he’s one of the best returners in college football history, a nice additional fantasy perk.

I understand that this fantasy draft was for a single quarterback league and some might think that drafting Lawrence in the first round was a mistake. However, being able to land someone who has been rumored to be the most complete QB prospect in years was too tempting to pass up.

In his short college career, Lawrence has already led Clemson to a national title and brought them to a second the next season. His mobility and accuracy make him a real dual-threat QB. Any team with him on it becomes instantly better.

Justyn Ross is a 6-foot-4, 205-pound monster who arrived at Clemson as the nation’s hottest wide receiver recruit. Over his first two collegiate seasons, Ross has grabbed 112 passes for 1,865 yards and 17 touchdowns. Alabama had no answer for him in last year’s National Championship Game, in which he had six catches for 153 yards and a touchdown.

With Tee Higgins now in the NFL, Ross will be the number one target for Trevor Lawrence, and he has the makings of a go-to player in the NFL. Ross will challenge Ja’Marr Chase as the top receiver in the 2020 class.

Alabama may have had four offensive players go in the top 15 picks of the 2020 NFL Draft, but anybody who watched them and says they didn’t come away impressed with Smith is lying. Smith and Waddle (who went at the 1.07) will be a scary combination.

Smith can do it all, and he might end up being the most well-rounded receiver in the class, something that NFL General Managers look for in their number one receivers. He had 68 receptions for 1,256 yards and 14 touchdowns as a junior and should see even more opportunity this season.