When the New York Giants drafted Duke quarterback Daniel Jones sixth overall in the 2019 NFL Draft, it sent shockwaves through the world of football. The decision was followed by weeks and months of mockery and doubt. Head Coach Pat Shurmur and General Manager Dave Gettleman defended the pick in the time leading up to the season, saying that his play on the field will ultimately show everyone why he was the right pick.

And while Jones did silence most of those critics through his play on the field, there are now rumblings that Shurmur may have wanted another quarterback in New York instead of Jones. In fact, back on January 12, PFN Insider Ben Allbright reported that Drew Lock was one of Shurmur’s favorites in the draft last year. And now after being let go by the Giants at the end of the 2019 season, Shurmur will get to coach Lock in Denver as the offensive coordinator.

Drew Lock was one of Shurmur’s favorites in the draft last year.

And in a press conference that was held on February 6, Shurmur confirmed this, saying they had a high opinion of Lock and liked him a great deal.

“Typically when you draft a QB high, those are organizational decisions … I will say this: We had a very, very high opinion of Drew Lock. We liked him a great deal.”

Gettleman and his history of Senior Bowl MVPs

So, if Shurmur, in fact, wanted Lock, why did Gettleman want Jones badly enough to supersede his head coach? Looking at Gettleman’s history, there is one key trend that becomes evident – he has a history of drafting Senior Bowl MVPs. Jones performed very well at the 2019 Reese’s Senior Bowl before being drafted by Gettleman, but he is not the only one.

In 2018, Gettleman drafted Richmond QB Kyle Lauletta in the fourth round after he won the Senior Bowl MVP award. Ultimately, Lauletta didn’t work out and was waved a year later. The year prior, the Giants organization took another MVP QB in the third round, Davis Webb. He was also eventually waved by the organization.

There was likely a lot more scouting and work put into the decision to draft Jones, but it does highlight how much Gettleman and the organization were involved with this pick. Between Gettleman and the prior GM, they selected three consecutive Senior Bowl MVPs, making it a little less than a coincidence. Gettleman openly admitted that the pick was one that he agonized over for a long time.

“I agonized over that. I agonized. Before the draft, we discussed that thoroughly as a group – first last Friday, then again Wednesday. Obviously we had great regard for Josh Allen. But the one thing I have learned is you don’t fool around with a quarterback. If he’s your guy, you take him.”

Gettleman, however, continues to assert that Jones was actually Shurmur’s first choice. In a recent interview with WFAN, Gettleman said that the former head coach was the first to bring up Jones and that he then, in turn, fell in love with him at the Senior Bowl.

“We looked at all the quarterbacks and right up front Pat was most enamored with Daniel,” Gettleman said on WFAN. “We just kept investigating. You look at Pat’s history with quarterbacks … the young guys and what he’s gotten out of them. For him to be that enamored with him, it certainly made me do my homework.”

What makes this so hard to believe, and also supports what Allbright has reported, is that it was Shurmur who was let go at the end of the year and not Gettleman. If Shurmur was responsible for drafting Jones, who was impressive in his rookie season, why would he have been let go? What is all the more possible, is that Gettleman wanted Jones and was able to keep his job because of it. By making it seem like Shurmur wanted him, it gives Gettleman a scapegoat if the young QB begins to struggle.

It was common knowledge that Shurmur was a sought after coaching candidate after being let go by New York. Shurmur had a lot of different options and it is believed that he had as many as four different offers from teams to be the offensive coordinator. Ultimately, he chose the Broncos.

What made the Broncos so special? Well, Shurmur would finally be able to coach the QB prospect that he firmly believed could be a winner.

“Obviously, we were in the market for a quarterback last year and we had a very, very high opinion of Drew,” Shurmur told Phil Milani of the Broncos. “We did a lot of work on him. We were very certain that he was going to have an outstanding career—he’s got a bright future – and I’m really looking forward to being able to work with him.”

His adoration for the young QB is evident when he talks about him. Having fallen to late in the second round (42nd overall), grabbing Lock in that spot might have saved the Giants quite a bit of ridicule. Nevertheless, it is still too early to tell who out of Gettleman or Shurmur got it right, especially when considering how similar Shurmur believes the two QBs are.

“Skill sets are very similar. They can throw the ball well. They can move around well. You saw flashes of really good football from both of them this year,” Shurmur said.

Whether Shurmur and Gettleman were on the same page when selecting Jones or not, both will now get the chance to tie their names to their respective young QBs. 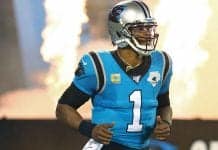 Cam Newton’s OSM points to potential role with the Patriots 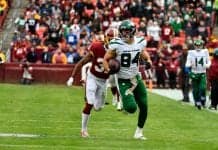 OSM Back to the Future: Jets TE Ryan Griffin’s top-ranked performance from 2019