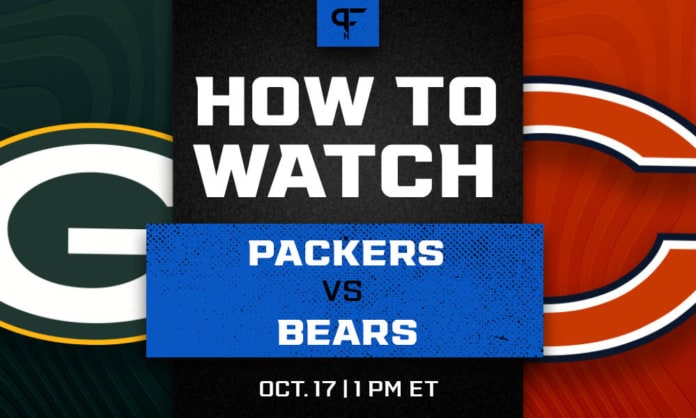 Packers vs. Bears prediction, pick, odds, and how to watch the Week 6 game

What are the Packers vs. Bears odds and prediction, what channel is the game on, and how can you stream this Week 6 matchup?

Sunday afternoon sees the latest installment in the NFL’s most-played rivalry game. When the Green Bay Packers and Chicago Bears take to Soldier Field, it will be the 203rd time the teams have met. Who will emerge victorious on Sunday? Let’s take a look at the current NFL odds, TV channel, how to live stream, as well as a Packers vs. Bears prediction in Week 6.

Looking to make some pennies on the Packers next Sunday? Think you might be able to bolster your bank account on the Bears? If you’re looking to make a little money predicting the future, it’s worth considering the past before you lay down your hard-earned cash.

Coming off the back of an overtime win over the Cincinnati Bengals, Green Bay is a -210 favorite early in the week, according to DraftKings. The Packers have beaten the Bears in all but three of their last 20 encounters. They also hold a 101-95-6 all-time record over Chicago. With away teams going 41-39 through Week 5 of the 2021 NFL season and away favorites standing 19-10, taking the Packers this Sunday makes sense.

The -4.5 spread line is also favorable. The Packers are 4-1 against the spread in 2021, whereas the Bears are 3-2. Green Bay has covered the -4.5 spread in the last four games against the Bears. Although I don’t expect the game to be a walkover, the Bears have lost by 20 points in their two defeats this season.

All signs from this season suggest that taking under the 44.5 O/U line is the smart move in the Packers vs. Bears game. Green Bay is 2-3 against the over this year, and Chicago is 1-4. Of the 10 total games the two teams have played so far, just 4 have totaled more than the 44.5 O/U line.

In theory, there might not be a better time for the Bears to entertain the Packers at Soldier Field. Green Bay comes off the back of a hard-fought overtime win over Cincinnati, with all the physical and mental exhaustion that such a game entails. Meanwhile, Justin Fields emerged as a tough and competitive leader to complement a savage Bears defense as Chicago compounded a miserable week for the Las Vegas Raiders.

There’s no doubting that the Bears have their quarterback of the future. Meanwhile, the Aaron Rodgers era in Green Bay is coming to an end. Will Sunday’s matchup be the ultimate changing of the guard, with a new king of the NFC North taking the baton from the long-standing ruler?

Probably not. While Fields is clearly a step up from Andy Dalton under center in Chicago, the passing offense still ranks stone cold last in the NFL with an average of 113.2 yards per game. They’ve leaned predominantly on the ground so far this season (126.8 yards per game). However, they’ll be without the injured David Montgomery.

While Damien Williams and Khalil Herbert were successful against the Raiders, the Packers’ run defense presents a stiffer challenge. Green Bay’s run defense is allowing just 102.2 yards per game this season, ranking 11th in the NFL.

If the Bears can’t run on the Packers, I’ll take Rodgers in a passing-game duel over Fields at this point in their careers. The Packers are averaging 247.0 yards per game through the air while scoring a touchdown on 5.9% of their passing plays.

How to watch and listen to Packers vs. Bears this week