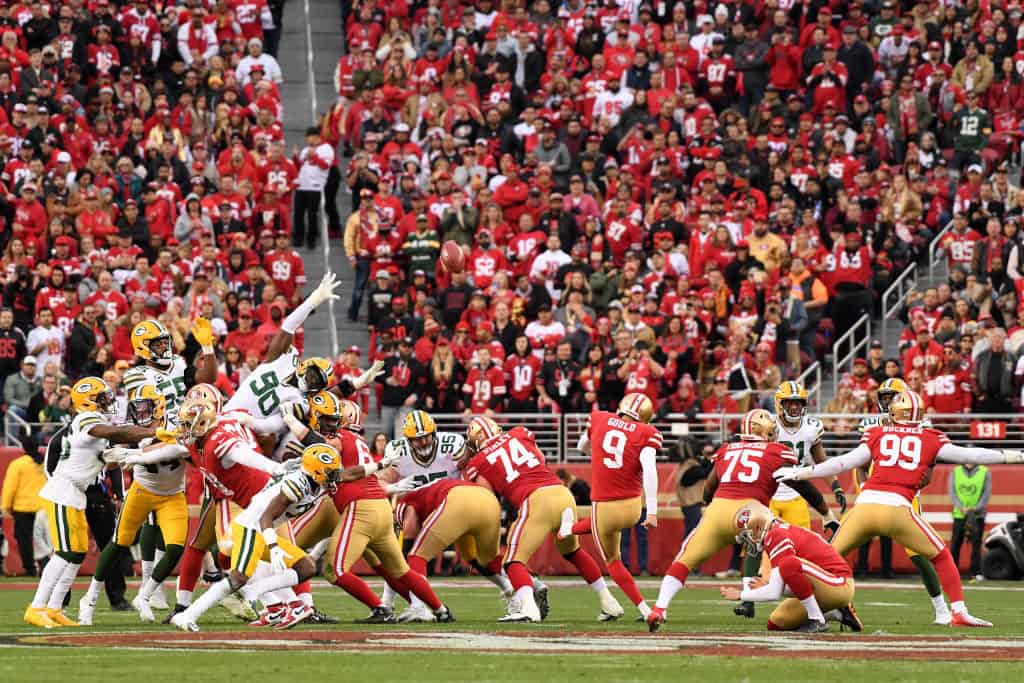 A fall evening just feels right with the Packers and 49ers on the TV. Guaranteed to feel even better is waking up Friday morning with a few extra bucks in your pocket if you can get the Packers vs. 49ers pick right. PFN gives you a betting preview with a pick, the odds, and lines to tonight’s Thursday Night Football matchup.

Packers vs. 49ers odds and lines for tonight

If you remember, it was nearly 11 months ago when the Packers and 49ers last met. In that contest, the 49ers came away with a 37-20 victory over Aaron Rodgers and then-rookie head-coach Matt LaFleur. As you know, a lot has happened since then.

So far, 2020 has been less kind for Kyle Shanahan, although he finds his 49ers at .500 midway through the season. LaFleur and the Packers, on the other hand, sit 5-2 and on top of the NFC North division.

A similarity very evident heading into tonight’s Thursday Night Football matchup is the running back situation on both sidelines. Aaron Jones is a question mark leading up to kickoff while two of his backups – Jamaal Williams and AJ Dillon – sit out for positive test purposes. Unproven backs Tyler Ervin and Dexter Williams will shoulder the load of Jones doesn’t go. Shanahan’s backfield doesn’t look much clearer with JaMycal Hasty expected to share the rushing load with Jerick McKinnon.

The story this week has revolved around Shanahan’s offensive weapons. After George Kittle and Deebo Samuel’s recent moves to injured reserve, receivers Kendrick Bourne and Brandon Aiyuk were announced ineligible to play tonight. On top of it, it’ll be Nick Mullens in at quarterback over an injured Jimmy Garoppolo. Mullens, however, will be getting tight end Jordan Reed back as the 49ers activated him off IR this afternoon.

Can the Packers cover tonight?

The Packers started the season as one of the highest-scoring offenses in the league and find themselves third with 31.3 points scored per game. They’ll need offense going against a 49ers defense giving up just under 20 ppg over the last three weeks.

Overall, the 49ers defense has held opposing offenses to just 314.6 yards per game, a number not indicative of their 4-4 record. Going against a defense that ranks sixth in total defense, LaFleur will have to get creative with how he attacks Fred Warner and the 49ers defense especially if he’s without Jones at running back. After last week, however, Rodgers looks to be in sync with wide receiver DeVante Adams, finishing Sunday’s contest with seven receptions and three touchdowns.

Unfortunately, it was announced that breakout WR Allen Lazard will be out tonight after suffering a core muscle injury early in the season. With Lazard out, Adams will be a focal point for Rodgers.

Can the 49ers cover tonight?

Mullens came in for Garopollo and stole the show late in Sunday’s contest against the Seattle Seahawks, finishing the game 17/25 for 238 yards and two touchdowns on just 29 snaps. Can he duplicate the success?

Unlikely given the laundry list of players he’s without tonight. Four of the top five reception leaders in San Francisco won’t take the field while Mullens will have the services of Trent Taylor, Ross Dwelley, Reed, and others. Taking a look at the Packers vs. 49ers odds for tonight, this offense is less than ideal if you’re looking for them to hit the over on 48.5.

The Packers struggled on Sunday against the lowly Minnesota Vikings, and a duplicate output could put them in danger of losing ground in the lead for the NFC. A loss for the 49ers could move them to three games back in the NFC West. Defensive coordinator Robert Saleh’s unit will need to not only contain Rodgers but also create some of their own luck if the 49ers are going to cover.