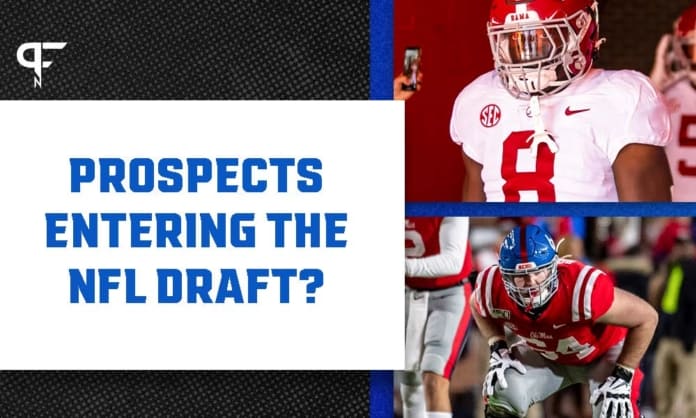 Ole Miss vs. Alabama: At least two underclassmen committed to the draft?

Ole Miss vs. Alabama represents a clash of two unbeaten SEC squads. Our eyes will be on future NFLers Nick Broeker and Christian Harris.

As is the case in just about every SEC contest, there will be plenty of NFL Draft talent on the field in the Ole Miss vs. Alabama game on Saturday. This is a matchup I believe the Tide wins easily, but there are plenty of reasons to tune in. Chief among them? To watch Mississippi offensive lineman Nick Broeker and Alabama linebacker Christian Harris, both of whom could be nearing a decision on the 2022 NFL Draft. Let’s take a look at the latest on these two prospects.

Rebels left tackle Nick Broeker is likely headed into the draft after the season. Broeker is fundamentally sound and was given a third-round grade on my recent big board. While I have Broeker listed on my tackle board, many believe he’ll play guard on Sundays.

Broeker, who dominated in a Week 2 victory over Louisville, has been Mississippi’s full-time left tackle since the 2021 campaign. He’s viewed as a prospect with high football intelligence.

According to PFN Draft Analyst Oliver Hodgkinson, “Broeker will need to showcase more consistent hand usage if he wants to elevate his NFL Draft stock. There are times when his handwork is impressive. Despite this, there are other times where his timing and positioning put him at a disadvantage.”

Alabama linebacker Christian Harris entered the season as my top-rated prospect on the Tide’s roster. He was somewhat disappointing against Florida — especially in coverage. This is why he’s presently listed as a second- or third-round prospect on my board.

Harris is still getting late-first/early-second-round grades by some scouts — that’s exactly where I had him rated over the summer. While I was not told Harris will enter the draft after the season, the needle seems to be overwhelmingly pointing in that direction.

As a coverage linebacker, Harris needs to develop more awareness of the game behind him, per PFN’s Hodgkinson: “He excels when the ball is in front of him. Yet, there are examples of receivers sneaking behind him, which may limit Harris to man-coverage-specific teams at the NFL level.”