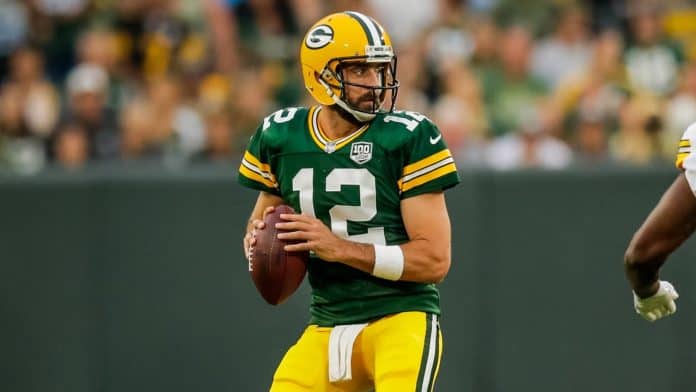 By PFN Staff
June 9, 2021
What's in this article? Click to show
Aaron Rodgers’ beef with the Packers
Odds shortening on Denver as Rodgers’ next destination
Other teams looking for a QB

Last year, we saw Tom Brady leaving the Pats after 20 seasons. Is something similar going to happen this year with Aaron Rodgers? After spending 16 years with the Green Bay Packers, the reigning NFL MVP seems to be on the move.

It’s been a while since the world found out that Aaron Rodgers has a beef with the Packers’ management. The QB himself admitted he doesn’t like the way the franchise is managed. When everything started settling down, news came that the QB has missed the first mandatory minicamp session.

There are two other sessions scheduled to take place this week, and if he misses all of them, the Packers will have the option to fine the quarterback $93,000. Rodgers also decided not to take part in his team’s voluntary activities this offseason, something he hadn’t done in previous years.

Aaron Rodgers’ beef with the Packers

“We are not idiots, Aaron Rodgers will be back,” this is what Green Bay’s CEO Mark Murphy said a few months ago when asked about the QB’s future.

More recently, the team GM Brian Gutenkunst spoke out on the issue, admitting there was a problem on the Rodgers-Packers relation. Gutenkunst did say he was aware that Rodgers wants to move on, but has also iterated the team has no intention of losing their star player.

Following Gutenkunst’s interview, betting odds on Rodgers’ team in 2021 moved in Green Bay’s favor, getting somewhere in the ballpark of -147.

However, with the news about Rodgers missing the training camp, odds have started changing. Although Green Bay still remains the #1 favorite, odds did make a big move in Denver’s direction.

Odds shortening on Denver as Rodgers’ next destination

Aaron Rodgers still has three years remaining on his current contract. This explains why Green Bay is favored to keep the QB in the next season.

However, if Rodgers decided to move on this summer, Denver looks like the team he’s going to pick. They had a terrible season in 2020, failing to qualify for the postseason after finishing in the #12 place in the AFC, with a 5-11 score.

They are determined not to let the nightmarish season become recurring. To prevent that, they decided to appoint a new GM in George Paton. The next thing they did is make some big signings in the Draft, most notably drafting cornerback Patrick Surtain II from Alabama.

What they still haven’t done is sign a new quarterback. As offense was their main problem last season, acquiring a new QB looks like a reasonable thing to do. In the 16 games they played in 2020, the Broncos collected only 323 points. Meanwhile, Rodgers-led Packers scored 509 points.

Other teams looking for a QB

Signing Aaron Rodgers would automatically make any team a serious candidate for the Super Bowl. In fact, since the rumors about him moving to Denver started emerging, the Packers’ Super Bowl odds started shortening – they moved from +6600 to +2000!

It wouldn’t be an understatement to say that every team would like to have Aaron Rodgers on the roster. After all, he’s the 2020 NFL MVP!

A team that appears to be looking into the possibility of signing Rodgers is Las Vegas. The Raiders have the money, as well as the need for such a high-profile quarterback. The odds on the Las Vegas Raiders are +600 at the moment. Behind them are the New Orleans Saints at +1800. With Drew Brees retiring after 20 years, the Saints are in need of a new QB.

Other teams in the discussion include the Miami Dolphins at +1800, Atlanta Falcons at +2000, and the Indianapolis Colts at +2000.