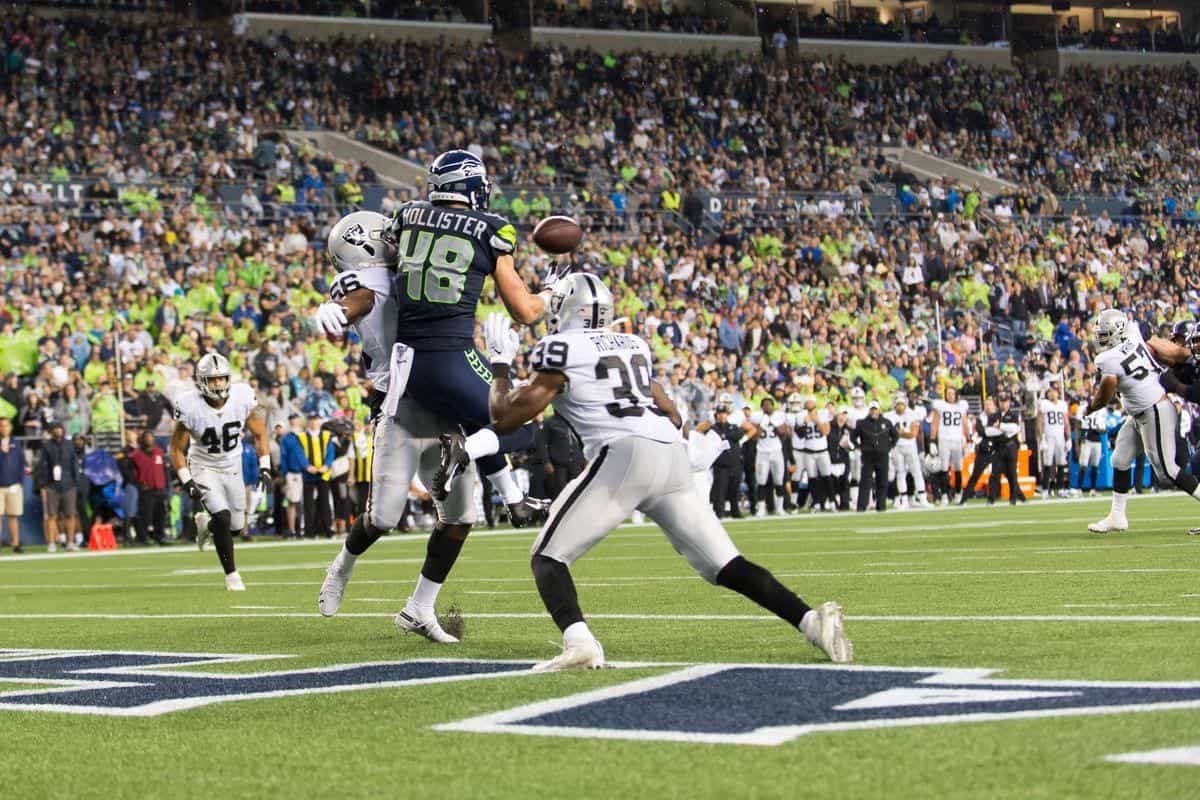 The Oakland Raiders fell to the Seattle Seahawks 15-17 on a wet and wild Thursday night in Seattle. The defeat scuppered their unbeaten pre-season after previous wins against the Los Angeles Rams, Arizona Cardinals, and Green Bay Packers. While the result isn’t important, some of the performances on show were.

The final pre-season game is the last job audition for most of the players that get game time in week 4. They’re not only fighting for a job with the Raiders but potentially putting something on display for the other 31 teams in the league.

Come 4 pm ET on Saturday, players will be cut and the starting 53 man roster for the upcoming NFL season will be shaped. With that in mind, let’s look at some of the key takeaways from Thursday night and what they mean for certain players.

The de-facto starters weren’t even present on the sideline on Thursday night. The Raiders only suited up 46 players, according to Matt Kawahara of the San Francisco Chronicle. I ran out of fingers and toes at 20, so I can neither confirm or deny the accuracy of that report. That means 44 players are already locked into the roster meaning a maximum of just nine spots were left to play for. In reality, it is even less than that when you consider that kicker Daniel Carlson played and will be the day one starter. Carlson had a nice night, going 3/4 on field goals, with the one miss striking the upright.

For me, there was one significant takeaway from who wasn’t on display against Seattle. Undrafted rookie Keisean Nixon was left out of the gameday roster and looks to have won himself a job. The former South Carolina cornerback was a late addition to the roster, but impressive play through pre-season looks set to have paid off.

Nixon has been a contributor not just on the defense, but on special teams too. The commitment he has put into excelling in both phases of the game looks to have won him the job.

He’ll hope to use his special team performances to push for game time in the Raiders secondary. Speaking of which…

The first quarter was not pretty for the Raiders defense. They struggled to stop the run, particularly C.J. Procise, who had several chunk plays. This was despite first-teamer Josh Mauro making an appearance after losing a lot of playing time with injury. Mauro is seen as an essential cog in stopping the ground game. Recently acquired defensive tackle, Ethan Westbrooks, did stake his claim to a roster spot with a couple of big plays including a sack on Paxton Lynch.

Geno Smith, who started at quarterback for the Seahawks, had all the time in the world to make plays in the pocket. He faced very little pressure, which was an area the Raider focused on improving this off-season.

However, it was the secondary that struggled. Makinton Dorleant was torched on the opening drive. He was beaten comfortably to the ball for the Seahawks first-quarter touchdown. Dorleant joined the Raiders in December last year after bouncing around Green Bay, Kansas City, and Baltimore. He could be looking for another home come Saturday.

He wasn’t the only player who struggled though. Safety Jordan Richards was beaten to the ball in the end zone for the second Seahawks touchdown. He also had an opportunity for an interception that he couldn’t hold on to in the third quarter. These plays can be the difference between winning and losing a job.

Brown over Butler in Raiders running back battle

Doug Martin is gone. Josh Jacobs is RB1. Jalen Richard and DeAndre Washington will provide a catch passing option out of the backfield. Then there is the final running back position.

If there had been any doubt about RB4 it was extinguished on Thursday night. Although James Butler found the end zone for the Raiders only touchdown of the night, he was largely bottled up by the Seahawks defense.

By contrast, Mack Brown continued to impress with the ball in his hand. He made several big plays, including a long run for a first down after Nathan Peterman had taken a sack deep in Raiders territory. He also flashed pass-catching ability out of the backfield, which will help him win a job in Jon Gruden’s offense.

The undrafted free agent out of U.C. Davis has been the sensation of Raiders pre-season. He’s impressed the staff on the practice field. He’s impressed during the pre-season games in which he’s appeared. Finally, he’s impressed on camera as one of the faces of this season of Hard Knocks. He should be a lock for the 53 man roster, but Gruden still opted to get more of a look at him on Thursday night.

It was a rough night for Doss. He was targeted often by both Peterman and Mike Glennon. However, he had several dropped passes and catches he should have made but didn’t. In fairness to the rookie, some of them weren’t his fault with some overthrows that even the game’s greatest receivers would have failed to have snagged.

Nonetheless, it was a disappointing end to a pre-season performance that has outshone everyone else. He should still make the 53 man roster, but it has made the decision for Mike Mayock and Gruden that little bit harder. To his credit, Doss himself was philosophical after the game, tweeting:

Take the good with the bad, learn from it and get better every week! #Raidernation ☠️

One of the key battles, which has run from the beginning of training camp up until Saturday’s roster cuts, has been the for the right to backup up Derek Carr for the 2019 season.

It started as Mike Glennon’s to lose. However, slowly but surely, Nate Peterman has played his way into contention. I’ve mentioned Gruden’s love affair with Peterman in previous articles. The former Buffalo Bills QB has repaid his coach’s faith with some impressive pre-season performances.

Peterman saw the majority of action on Thursday night, suggesting he had more to prove. It is telling that at no point during pre-season has Peterman come into the game ahead of Glennon.

It still very much looks like Glennon will start the season as QB2. Will the Raiders carry three quarterbacks on the 53 man roster? If they want to keep Peterman in town, it would be a risky move to stash him on the practice squad. In his post-game press conference, Gruden alluded that the QB position was one of the tough calls that are still to be made before Saturday’s cuts deadline.

Once the deadline passes, it’s on to the season opener against the Denver Broncos. Pre-season football is over, and the real action is about to begin.

Knock on wood if you’re with me!