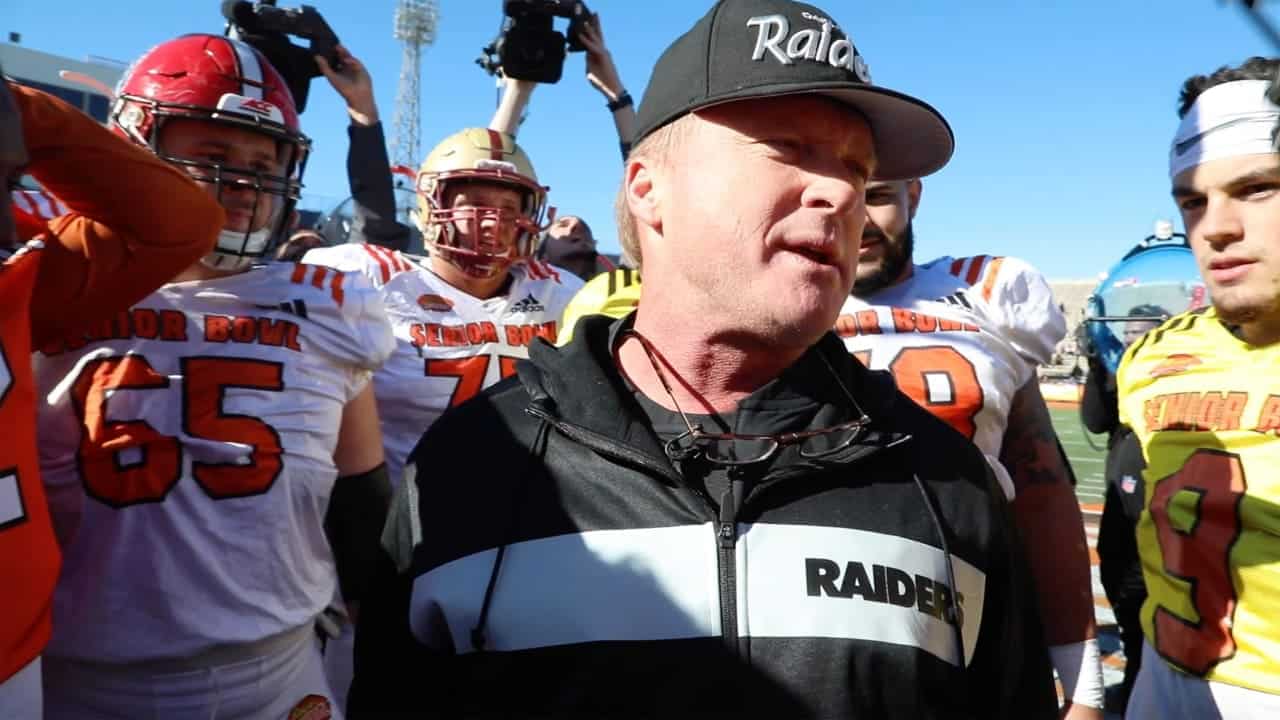 Photo Credit: raiders.com
What's in this article? Click to show
The Oakland Raiders went into the 2019 NFL Draft with a set strategy. Their mission was to draft high character players from high-level colleges. As they furnish their roster with undrafted free agents, another approach has begun to feature prominently. It is one that has Jon Gruden’s influence clear for all to see.
Keelan Doss – WR – UC Davis
Te’Von Coney – LB – Notre Dame
Alec Ingold – FB – Wisconsin

The Oakland Raiders went into the 2019 NFL Draft with a set strategy. Their mission was to draft high character players from high-level colleges. As they furnish their roster with undrafted free agents, another approach has begun to feature prominently. It is one that has Jon Gruden’s influence clear for all to see.

Whether the Raiders knew it or not at the time, it was a strategy that was born on December 31st, 2018. On that New Year’s Eve, Jim Nagy announced the coaching assignments for the 2019 Reese’s Senior Bowl. Gruden and the Raiders coaching staff were allocated to the North Team. With three first round picks and a war chest of later round picks, Gruden now had the opportunity to get the first-hand experience with some of the best talents that college football had to offer.

Instead of just basing decisions on game tape, he could see how hard the players worked on the practice field. He got the first-hand experience of how players integrated with new teammates they’d never played with before. The Oakland coaching staff embedded their playbook into the North Team game plan. This allowed them to analyze how quickly players could understand and operate the game plan which will be critical at the next level. The game tape alone doesn’t showcase a players personality, but Gruden learned these personalities all week in practice and for the game. It gave him a real sense of what a player was all about. Most importantly, he could see and smell if those players had what it takes to be a Raider.

The process was mutually beneficial.

Where Gruden got to experience the players first hand, they gained an understanding of what it would be like to work for him. If they were to land on the Raiders roster, they would know in advance what would be expected of them. Those players would also have an extra step when it came to rookie camp with prior experience of the Raiders playbook. For these players, Gruden already had a high reputation as a coach and a television analyst but working with him only helped to reinforce that reputation.

I spoke with several players before the NFL Draft about their experience of working with Gruden at the Senior Bowl. They painted a picture of respect and admiration. All the players felt like they got better each day while under his coaching.

“Jon’s awesome. He’s a tremendous coach and obviously has a great record as a ‘ball coach. He was a great person too. The way he was able to rally the troops in a short week there, and get guys to play for each other, and play together was remarkable” – Drue Tranquill.

“It was amazing to be around him. So many different people look up to him as a coach. In the football culture just an amazing guy. Just being under him, and learning from him, it was an amazing experience” – Penny Hart.

The importance of building such relationships can’t be understated.

During the draft, the teams have the say over which players they take. Once the draft is completed and players that haven’t been drafted become undrafted free agents, it’s a different story. Where there are multiple teams interested in a player, it’s their decision as to which organization they choose. If you’ve already built a relationship with a coach, and gotten a feel for the team’s playbook, it makes that decision just that little bit easier. It gives the team a competitive advantage over the other 31 teams competing to secure that player.

On May 3rd, the Raiders announced the signing of 10 undrafted free agents. A number of those had played under Gruden at the Senior Bowl. Of those, I’ve selected the three that I believe have the best chance to make the 53 man roster that opens the season.

Doss is the perfect example of everything that I’ve said above. After suffering a pectoral injury at the 2019 NFL Combine, he went undrafted. Despite this, there was a huge market for him when he hit free agency. Reportedly, 19 teams including the Raiders coveted his services. Doss had played under Gruden at the Senior Bowl and impressed the Raiders staff there. He tallied four receptions for 55 yards for the North Team. Gruden slapped two of the now famous Raiders stickers on his helmet to honor his performance. He also participated in the Raiders local pro day, further enhancing his reputation. When it came to making a choice, the decision was no doubt made easier for him by his familiarity with the organization.

Familiarity alone doesn’t guarantee a roster spot, however. So what can Doss bring to the Raiders on the field?

The first thing he brings is productivity.

He was a three-year starter at UC Davis and left the program with many school records. Doss leads the Aggies in receptions, receiving yards and 100-yard receiving games. According to ucaggies.com, he secured 29 total touchdowns in his time there. His performances during both his junior and senior seasons earned him All-American honors.

Doss has an incredible combination of speed, hands and refined route running. At 6’3 he has the size to go up and grab the ball and provide a red zone threat. He also displays solid strength when being tackled, keeping his balance on impact and forcing multiple defenders to take him down.

The Raiders have already added significant pieces at the wide receiver position during the initial wave of free agency and the draft. However, I firmly expect to see Doss on the roster come September. He’s already hard at work earning that place.

Despite adding Brandon Marshall and Vontaze Burfict during free agency, I anticipated that the Raiders would add another linebacker during the draft. Some draft analysts even had Oakland as a destination for top linebackers Devin White and Devin Bush. However, as the draft progressed, Gruden and Mike Mayock addressed nearly every defensive position but linebacker.

Once the draft was complete, they swooped to secure Coney to address the position. Coney is the ultimate combination of Mayock’s desire for players from top-level colleges and players that Gruden coached at the Senior Bowl. He also brings the on-field leadership that the new Raiders regime has valued highly throughout the draft process. Coney has been a vocal leader for Notre Dame throughout his time there.

Not only has he been a vocal leader, but his football has also done the talking too. He led Notre Dame in total tackles in both his senior and junior seasons, and Coney also added multiple sacks in both those campaigns. It is not a reach to say tackling is his most effective trait. He can be instrumental in stuffing the run at the line of scrimmage. Not only that but he is productive in coverage too.

Notre Dame LB @TevonConey is an absolute playmaker. He’s a great tackler and gets off blocks like no other. Had 123 tackles with 9.5 tackles for loss, four sacks, one interception, and four pass breakups last season. He’s a 3 down guy who will make a serious impact on Sundays pic.twitter.com/nL8oRrvnjk

So why did he fall out of the draft?

Coney served a year of probation for marijuana possession stemming from an arrest in August 2016 which may have thrown up some red flags for teams. He also has some athletic limitations that may have prevented organizations from taking a gamble on him.

The Raiders saw enough that they liked to overcome these issues. The lack of depth at the linebacker position leads me to think that Coney will make the 53 man roster. If he continues to impress and grow through the summer, he could even see some reps as an early down player.

The fullback position may be one that isn’t utilized by most offenses. You could say it was dying out in the modern NFL. However, it is a mainstay of Gruden’s offense. With the addition of Josh Jacobs and the re-signing of Doug Martin, you can expect the ground game to feature heavily for Oakland this season. The fullback position will be integral to the success of that ground game. Besides, don’t forget that Gruden’s fabled “Spider 2 Y Banana” formation features the fullback as the primary pass-catching option. Ingold put in the hard work at the Senior Bowl and impressed the Raiders staff there.

With the addition of Ingold, the Raiders roster currently hosts three fullbacks. It is highly unlikely that they carry all 3 of these into the season. So what separates Ingold from Ryan Yurachek and Keith Smith?

Ingold can feature prominently in all three phases of the game from the fullback position.

Firstly, he is a nasty blocker who helped Wisconsin rack up huge numbers in the rushing game in his time there. His roots are in wrestling, as a three-time all-conference wrestler at high school, and he brings that physicality to his game.

Secondly, he has seen success as a rusher in that Wisconsin offense, scoring 11 rushing touchdowns over his junior and senior season.

Thirdly, he can also feature in the passing game having secured five catches for 93 yards and a touchdown in his senior season.

Off the field, Ingold received a sportsmanship award from the BIG 10 conference after his senior season.

He is the perfect fit for Mayock’s philosophy and Gruden’s playbook.