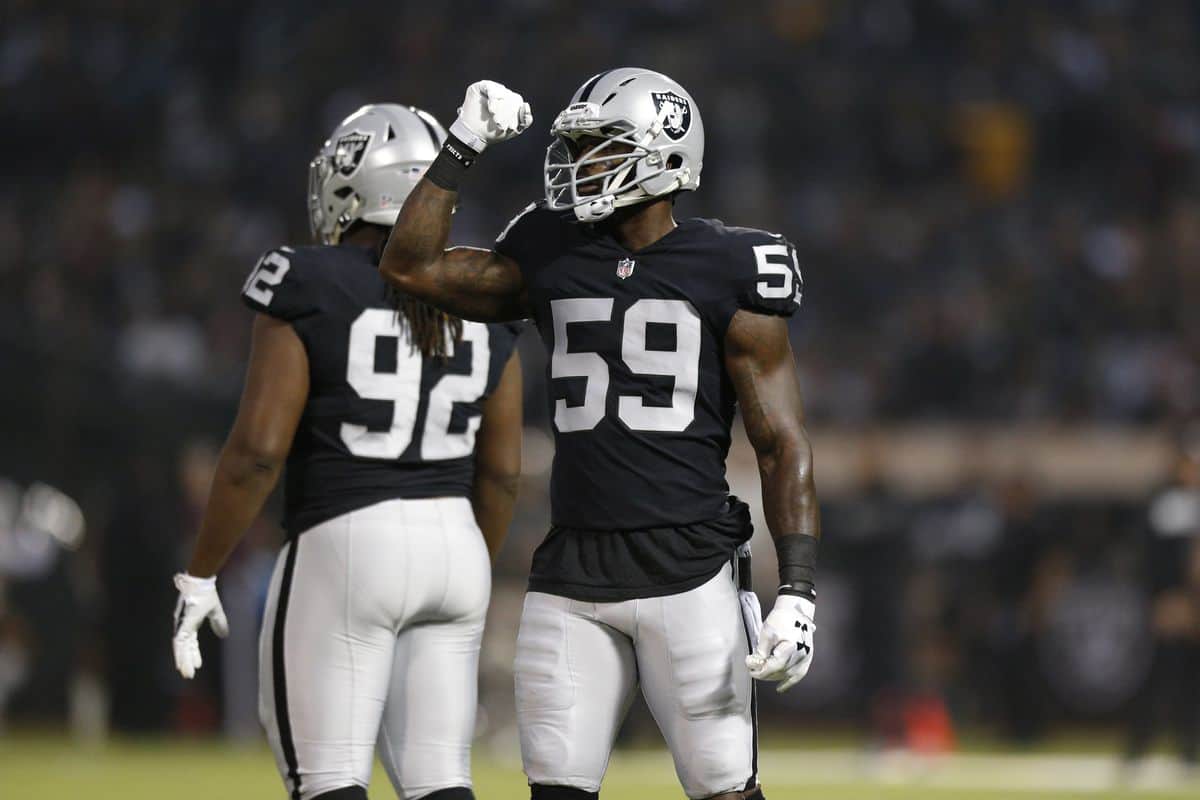 The Oakland Raiders are a team that needs to see a significant improvement in 2019. After going 4-12 in 2018, and with just one winning season since 2002, something has to change for 2019. With multiple first-round picks in the 2019 NFL Draft, rookie talent will be a major part of that transformation. However, is the acquisition of several talented veterans during the off-season the true key to success?

While the free agent additions of Trent Brown and LaMarcus Joyner are often highlighted, the building of a veteran linebacker group in Oakland has flown under the radar. It’s these additions that hold the keys to a more successful defense in 2019. It’s a defense that needs to grow and shape it’s own identity, after a 2018 season that never recovered from the loss of Khalil Mack.

Alongside Tahir Whitehead, they form the most experienced starting linebacker group in the AFC West. In a sport where everyone is always looking for the newest star, their experience can prove the difference-maker in 2019.

“I think experience goes a long way, and sometimes it can definitely be looked down upon and not be given that much attention.”

Whitehead spoke to me about how experience can give the Raiders an advantage in 2019. He’s been in the UK promoting the NFL International Series. The Raiders will take on the Chicago Bears in a new, purpose build, NFL stadium in London later in the year. For now, though, we’re focusing on how the Raiders improve on 2018.

“There’s no greater teacher than experience. Having 3 guys, we’re all in year 8 of our career. We all came in from the same draft class.”

Between the 3 players, they have 21 years of experience in the league. It’s in stark contrast to the other teams in the division who have multiple second or third-year players in starting roles. Marshall found his way to Oakland this year after the Denver Broncos felt comfortable with Josey Jewell, a rookie in 2018, taking his starting role for 2019. The rarity of such an experienced group playing together is not lost on the trio.

“We talk about that every day. About how amazing it is to see guys that were not expected to get drafted, or were late rounder guys, and here we are, going in to year 8 of our careers, and all on the same squad.”

The group’s combination of experience and talent will help to build a competitive advantage on the field for the Raiders in 2019. At the height of his career, Burfict was arguably the best middle linebacker in the NFL. Marshall had 3 incredible seasons for Denver, mixed in with some unfortunate injuries. It’s a group that, when fully healthy and focused, could wreak havoc not just in the AFC West, but in the whole of the league. It’s a prospect that excites Whitehead.

“To go out there, and pull it all together, I think we can go a long way. I think we all have the talent level, the assets, the understanding of the game, to go out there and do that. On top of that they’re great guys. They’re smart, they enjoy the game. They actually love the game. I’m excited to get out there and get to it.”

There can be no doubting that their experience will help the Raiders on the field. Additionally, the leadership that they bring off the field will be invaluable. Despite the 3 veterans, the Raiders will have one of the youngest rosters in the league for the coming season, which includes 3 first-round rookies. Of those, Clelin Ferrell and Johnathan Abram will help form the revitalized defense in Oakland. They won’t have to look hard for leadership or mentors in the locker room.

“The experience, that veteran aspect that I bring to the table, can go a long way with them. I’ve seen guys that have been talented, like they are, come in to the league and haven’t quite panned out. So, just giving them that bit of advice and showing them the ropes.”

Having a successful and prolonged career in the NFL extends beyond just being talented on the football field.

“From how to take care of yourself. What foods to eat. What to watch out for. What to expect from family that comes with the game. There’s so many things that come along with being a professional athlete, that I can shed light on  being around for quite some time. Not just my stories, but other guys stories that have been shared with me along the way.”

“I think they’ve been like sponges, man. They’ve just been soaking everything up. They’re eager to get out on the field and show their worth. They’re hungry and they’re working hard.”

With young talent and veteran leadership, the Raiders are primed to shine in 2019. The Raiders will be looking to leave their faithful fans in Oakland with fond memories, not a bitter goodbye, as they head to Las Vegas in 2020. The veteran linebacker core has a huge part to play in that on the field, as well as off it. Much has been made of changing the culture in the locker room in this new Mike Mayock era. Have the changes in the past few months had any impact there? Can we expect a better year for the silver and black?