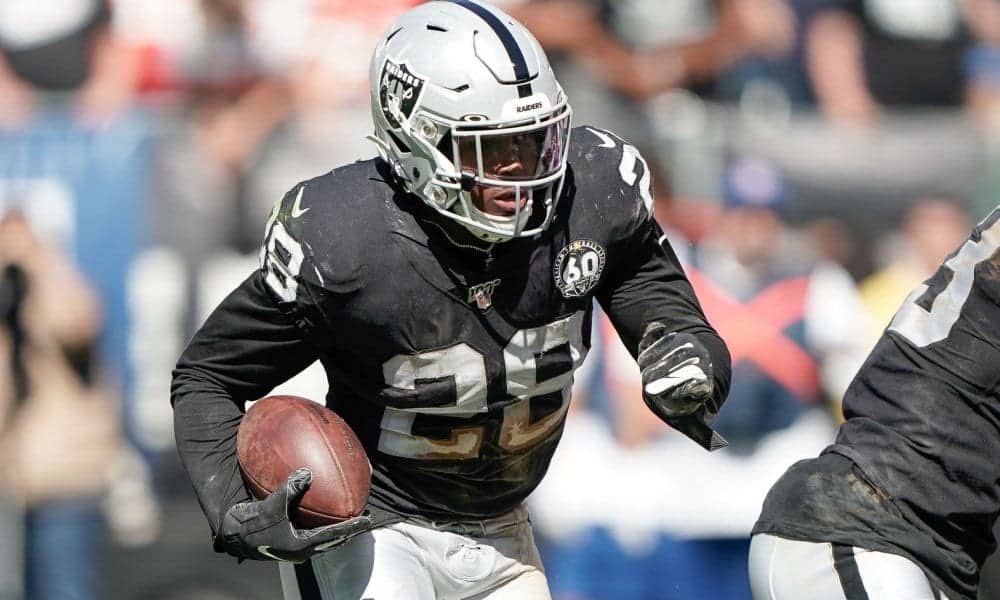 Photo Credit: USA Today
What's in this article? Click to show
Raiders rush defense gives them an edge over the Vikings
Their improvement had been led by a rejuvenated Tahir Whitehead
Josh Jacobs is giving the rushing attack a spark

The Oakland Raiders travel to take on the Minnesota Vikings on Sunday at 1 PM ET. They’re coming off the back of a Week 2 loss to the Kansas City Chiefs where they were defensively brutalized by Chiefs QB Patrick Mahomes. After holding the Chiefs at bay through the first quarter, they had a breakdown in the passing defense, giving up 28 unanswered points in the second quarter. But even with all that, and as ridiculous as this may sound, there were signs from that game that provide hope for a win in Week 3. However, they’re going to need to rely on tough defense and Josh Jacobs to give them the victory over the Vikings.

Raiders rush defense gives them an edge over the Vikings

The secondary may have given up touchdowns of 44, 42, 27, and 39 yards but the rush defense proved to be problematic for the Chiefs, as it had been for the Denver Broncos in Week 1.

While Mahomes was torching the secondary, the front seven only gave up a meager 32 yards on the ground. Chiefs RB LeSean McCoy had rumbled through the Jacksonville Jaguars with 8.1 yards per carry but against the Raiders, he was held to just 2.1 yards per carry. His teammate Damien Williams (who is out for their game against the Baltimore Ravens) found himself picking up just 8 yards from 9 carries. In the history of this great rivalry, the 32 yards the Chiefs racked up on the ground was the lowest ever.

Yes, the Raiders rush defense is legitimately good this year. The unit currently ranks 5th in the league for rushing yards allowed. They’re averaging just 63 yards per game given up on the ground. Through two games, they’ve allowed just one “big play” and that was a 40 yard run by Royce Freeman in Week 1. Of the 42 first downs that the Raiders have given up so far, only six of them have been given up on the ground. Getting better in rush defense was a key part of the strategy to be better defensively overall in 2019, and it’s started off well.

Their improvement had been led by a rejuvenated Tahir Whitehead

Whitehead leads the team in rush defense with three run stuffs for -5 yards. Whitehead spoke before the season about bringing veteran leadership, and he’s certainly doing that.

Another player bringing veteran leadership on the field for the Raiders is Johnathan Hankins. He leads the interior defensive line in tackles (7) and has contributed a run stuff of his own for -4 yards. Alongside P.J. Hall, Hankins has solidified the defensive interior. This has allowed the defensive ends to get in on the action too. Josh Mauro is a key contributor in the run game, as demonstrated on the very first play of the season. Although Clelin Ferrell was drafted to get after the quarterback, he too has been effective in run defense.

They will have to be at their very best on Sunday, especially against RB Dalvin Cook. The Vikings offense flows through him, and he leads the league in rushing yards with 265. As a result, the Vikings are ranked 2nd in rushing offense.

Josh Jacobs is giving the rushing attack a spark

Thankfully for the Raiders, they have their own rushing threat in Jacobs. The first-round rookie has fired life into a rushing offense that was sadly lacking last season. He may be the youngest Raider on the roster, but he’s performing like a player who has been in the league for years.

Despite the loss against the Chiefs, it was another standout game for Jacobs. His 51 yard run in that game was the longest by a rookie so far this season. His 99 yards in that game were the most by a Raiders rookie since 2016. Jacobs achieved an astonishing 8.3 yards per carry versus the Chiefs. Through two games, he has 184 yards from 35 carries, for an average of 5.3 yards per carry and two touchdowns. Out of the 38 first downs that the Raiders have picked up, 13 of them have come courtesy of the rushing game.

It’s a far cry from last season’s offensive ineptitude. The Raiders ended the season in the bottom half of the league for rushing offense, averaging just under 102 yards per game. So far this season, they are 12th in the league, with 113.5 yards per game. It may not sound a lot, but it’s a small change that makes a big difference to the offense as a whole, and Jacobs has led the way.

On the opposite side, the Vikings have allowed 108.5 rushing yards per game to the opposition so far this season. The Raiders will need to exploit this to improve to 10-6 in the head to head record between the two franchises.

The last time they met, Adrian Peterson rushed for 203 yards back in November 2015. The Raiders defensive unit will be looking to stuff out any repeat of that this weekend.