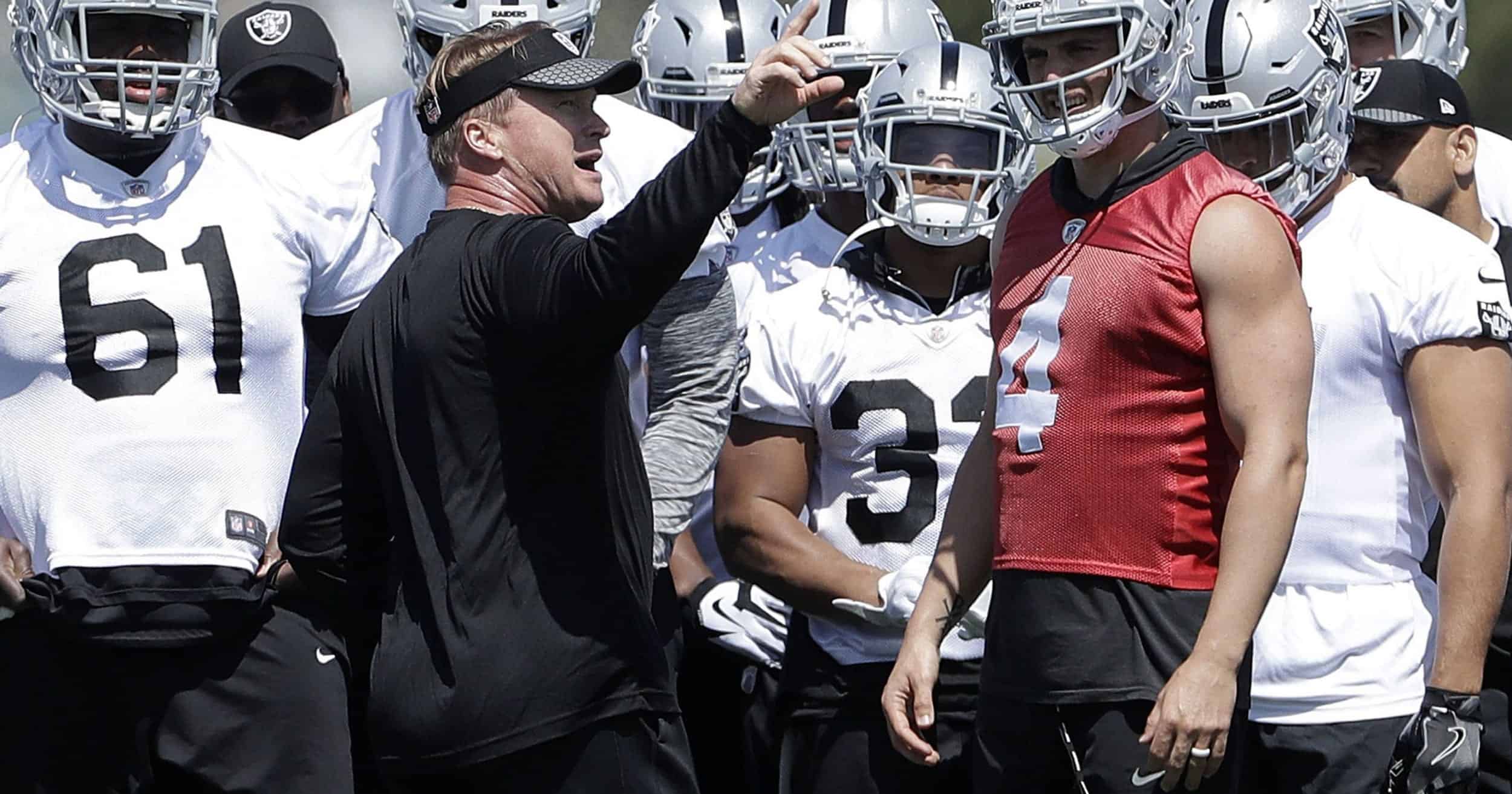 It’s one of the most anticipated announcements on the NFL calendar every year. Each fan base wants it to be their franchise. Everyone wants that inside look at how their team is shaping up for a Super Bowl run, and the Oakland Raiders fan base is no different. By mid-May, we usually know which team will be the subject of “Hard Knocks” but this year is an exception. An announcement came but only to say that NFL Films scheduling for its 100th year had forced a delay.

Could it be that they’re just building anticipation for an appearance from one of the most storied franchises in NFL history?

The Raiders certainly fit the criteria for mandatory inclusion.

Since 2013, in the absence of a volunteer to be the subject of “Hard Knocks,” teams can be forced to appear in the behind the scenes documentary. Let’s be honest, no team wants it’s every move documented and scrutinized by a hundred cameras so no team volunteers.

You can avoid mandatory inclusion if your team doesn’t have a first-year coach.

Success also guarantees a safe passage away from “Hard Knocks.” If a team has made it to the playoffs in the last two seasons, then they avoid mandatory inclusion.

Finally, and somewhat obviously, if you’ve made an appearance on “Hard Knocks” inside the last ten years, then you too avoid mandatory inclusion.

For 2019, that leaves five teams that can be forced to participate.

It’s already been announced that the San Francisco 49ers definitely won’t be the stars of the show this time around, which leaves the Washington Redskins, New York Giants, Detroit Lions, and the Raiders.

No team encapsulates the intrigue, passion, and drama of “Hard Knocks” better than the Raiders. The dysfunction and personalities are everything that defines must-watch television. In any season they would be a perfect fit and this season is no different.

The First Round Draft Pick(s)

Each season, the “Hard Knocks” team focuses on a team’s first-round pick from the NFL Draft. Will he live up to expectation? How is he adjusting to his new team? Is he the final piece of the franchise puzzle that propels them to a Super Bowl?

With the Raiders, you get three times the intrigue from this storyline.

Clelin Ferrell was the highest, and most contentious, draft pick. Many felt like the Raiders overvalued him. How will he set about proving those doubters wrong? His hard work and high character are two attributes that compelled Mike Mayock to select him and watching him go to work in training camp would be a joy to behold. As a rookie, can he display the leadership to alter a franchise while having a hundred cameras in his face? The same can be said for fellow first-round pick, Johnathan Abram.

Then there’s Josh Jacobs. His rag to riches story exceeds the first round pick narrative and bleeds through to another element of the tried and tested “Hard Knocks” story. That being, “the guy you want to root for” element. Every season there is a guy that grabs the attention of the audience. He’s the guy that you want to succeed. However, unfortunately, he’s usually the guy who ends up in the head coach’s office in the final episode.

That Guy You Want to Root For

Jacobs isn’t going to be the guy in Jon Gruden’s office in episode 5, that’s for sure. There are two guys that I think are going to win the hearts of Raiders fans as they attempt to make the 53 man roster.

The first one is no stranger to the television screen. Ronald Ollie was the star of “Last Chance U,” the documentary series that went behind the scenes of East Mississippi Community College. He signed as an undrafted free agent for the Raiders on May 6th and will compete for a roster spot in training camp. The last time he was on the television screen, he turned the opportunity into a scholarship. This time he could turn it into a career.

The other is former UC Davis wide receiver, Keelan Doss. He’s a local boy, who grew up a Raiders fan, and landed on the team as a UDFA. He impressed Gruden at the Senior Bowl and at a Raiders local pro day. His dream of playing in the NFL, for his boyhood team, is a story custom made for television.

It wouldn’t be “Hard Knocks” without a fight on the practice field, would it? As temperatures rise in the summer heat, and the competition for a roster spot heats up with it, it’s inevitable that tempers rise too. The potential for a brawl has already been written with the Raiders free agency moves.

Vontaze Burfict and Antonio Brown have history, and it would be must-watch television just because of this.

Antonio Brown and Vontaze Burfict are now on the same team ??

Now, that history gets to face off against each other on the practice field. Brown took to social media back in March to criticize the NFL for sensationalizing the grievances between the two. However, you can’t deny that the history is there. Once the pads are on and competition heats up, will old rivalries bring new problems?

Nearly every season of “Hard Knocks” has some focus on the head coach. The 2018 series featured Hue Jackson trying to retain his job as the head coach of the Cleveland Browns. In 2015, Bill O’Brien trying to lead the Houston Texans to the playoffs after falling short in 2014 was the focus. Who can forget the 2012 series when head coach Joe Philbin had to release Chad Ochocinco from the Miami Dolphins?

There isn’t a head coach in the NFL that’s better suited to the world of television than Gruden. The Raiders are a more attractive proposition for “Hard Knocks” because of him.

For the best part of 8 years, television has been in Gruden’s blood. From his role on Monday Night Football for ESPN, through his College Football commentary and “Jon Gruden’s Football Camp,” he has forged a successful career in television. ESPN’s inability to find an adequate replacement for him on MNF speaks volumes about the personality that he provided to the show.

The Raiders featuring on “Hard Knocks” would bring Gruden back into our living rooms for five, great, August nights. His passion for football was always evident in his broadcasts and seeing that at work with his players would be a thing of beauty.

There is the potential for drama too.

Anyone who watched the Raiders game against the Arizona Cardinals last November will be acutely aware of the sideline shenanigans of Gruden and Derek Carr.

Despite the expectation that the Raiders would draft a quarterback, the position went untouched in the draft. It would appear that Gruden has full faith in Carr but if things don’t start the right way in training camp, then another breakdown in the relationship may not be too far away and neither will the cameras.

It isn’t just the relationship between coach and quarterback that will be under scrutiny either. The acquisition of Mike Mayock as general manager has been heralded as a franchise-altering one and he is seen as a calm captain to steer the Raiders ship out of the stormy waters it usually inhabits. The consensus remains, however, that this is very much Gruden’s team from front to back and the dynamic between the two will be interesting to watch as training camp progresses. Let’s not forget that Mayock is no stranger to the television world either as the face of the NFL Network’s draft coverage for several years.

Everything is in place in Oakland to make an incredible series of “Hard Knocks,” and in my opinion, it could be the best yet. It would be a fitting way for the franchise to say goodbye to its home town before the Raiders head to Las Vegas in 2020.

All we need now is for HBO to make the announcement.