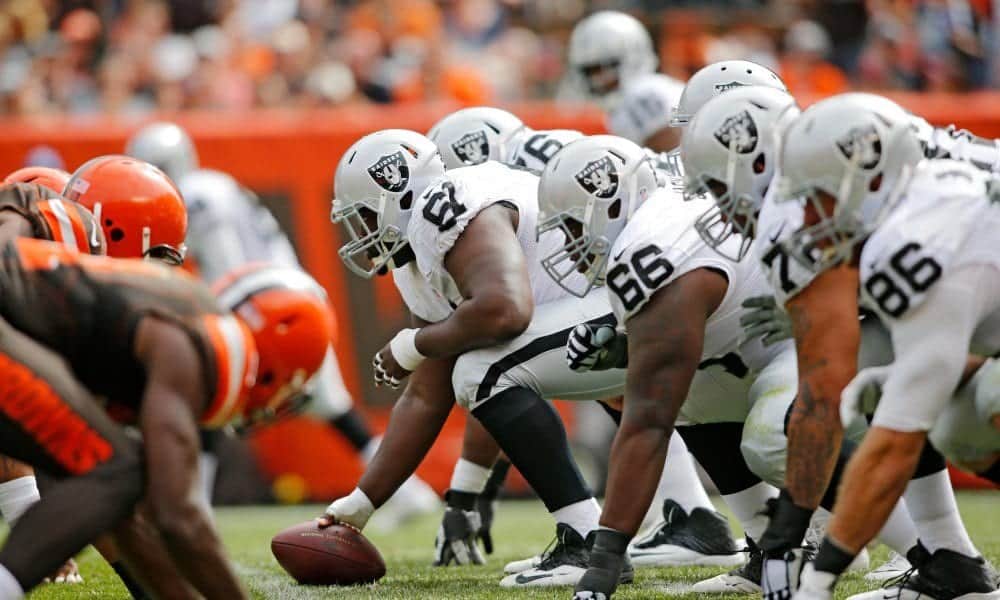 Photo Credit: Scott R. Galvin-USA TODAY Sports
What's in this article? Click to show
There are many must-watch battles at Raiders training camp
The key battle for Raiders training camp is on the offensive line
Incognito’s suspension provides an opportunity for Cooper or Good
Cooper represents the best option for the Raiders

Football is coming! Exactly a week from now, the Oakland Raiders will begin their 2019 training camp. After months of talk and roster building, we are finally going to see all the pieces out on the field. It’s a time of excitement and expectation.

However, it’s one that’s also filled with tension and frustrations, as 90 men do battle for just 53 spots. Every single player, aside from one or two stars, is auditioning for his job. Nowhere else is the battle for your career played out in front of so many eyes.

This year will be especially public for the players in Oakland. While training camp sessions are typically closed to fans of the Silver and Black, the cameras of HBO will be filming every move. As we’ve mentioned before here at Pro Football Network, the Raiders on Hard Knocks will be must-watch television. It will provide an in-depth look as the 2019 roster is shaped.

There are many must-watch battles at Raiders training camp

As with all teams, one of the intriguing battles features the rookies coming into the team. They’ll be trying to make their mark immediately and prove their worth in the league. Some of the later round draft picks, in particular, Hunter Renfrow, and undrafted free agent Keelan Doss will be battling hard in a deep wide receiver group. With an experienced linebacker group, the likes of Te’von Coney will have to show that they belong on the roster.

These battles will be interesting. However, there is one training camp battle that could define success in Oakland this season.

Getting better at creating pressure on the opposing quarterback is a must, there’s no question there. The key to success, however, rests with protecting quarterback Derek Carr. He simply can not take the punishment that he was subjected to in 2018. Keep Carr on his feet, keep the chains moving, and there’s a chance for a successful season in Oakland.

It isn’t just protecting Carr that the offensive line needs to get better at. The quarterback can be most successful when accompanied by a competitive ground attack. That’s where the interior of the offensive line needs to step up. The Raiders addressed the tackle position in free agency with the acquisition of Trent Brown. Alongside Kolton Miller, the bookends of the line are set. In Rodney Hudson, they have one of the best centers in the league. At right guard, Gabe Jackson is the de facto starter.

The left guard starting position is a three-way fight. It’s a battle that has been brought about by the decision to move on from Kelechi Osemele at the end of 2018, who was traded to the New York Jets in one of the more surprising moves. The transaction did free up $10.2m in cap space, which allowed some of the big signings over the spring. It was presumed that Chaz Green would step in at left guard. However, he was released at the end of May. Green will face off against the Raiders in 2019, after signing with the Denver Broncos.

With Denzelle Good alongside the off-season additions of Richie Incognito and Jonathan Cooper, there’s a three-way battle for the starting left guard job.

Incognito’s suspension provides an opportunity for Cooper or Good

All three will have a chance to battle it out in training camp. However, Incognito will be suspended for the opening two games of the season. His signing carried concerns, and those fears have been hardly allayed. The Raiders were reportedly aware that a suspension would come at the time they signed him.

There can be denying that Incognito has been a talented player in the league. In 2015, he was ranked as the top guard in the NFL and was voted First-Team All-Pro. His experience over 150 starts could be invaluable. If he can get back to that form, he would be an asset on the line. It’s a big “if,” which comes coupled with character concerns, and a history of penalties on the field. He also comes with a 59-91 record in the league. Not ideal if the team want to return to winning football games.

Good has a chance to win the job, but it’s a long shot. The 255th pick of the 2015 draft is set to be a serviceable backup at right guard. He’ll need to put on an outstanding display over the summer to stand a chance. Where Cooper and Incognito are new to the franchise, Good is already known. As a part of an offensive line that gave up 13 sacks in the Raiders final four games in 2018, Jon Gruden and Mike Mayock will be familiar with his potential contribution.

Cooper represents the best option for the Raiders

Mayock is also familiar with Cooper. It’s been six years since the Arizona Cardinals selected the guard out of the University of North Carolina with the 7th overall pick. At the time Mayock was the premier NFL Draft analyst for the NFL Network. He believed that the Kansas City Chiefs should have considered Cooper with the first overall pick.

After all, he was a Unanimous All-American, and the recipient of the ACC Jacobs Blocking Trophy in 2012.

The talent has always been there for Cooper. He has had elite quickness and foot speed. This was a by-product of an up-tempo offense at UNC. His explosiveness made him a weapon in the run game, as he could quickly get to the second level of the defense. Despite scouting reports claiming he lacked strength coming out of the college, he lifted the second most of any offensive lineman at the 2013 NFL Combine. As a former state wrestler, his hand skills have always made him perfect for successful pass protection.

Unfortunately for him, injuries have defined his career.

Cooper has not had a season in his career where he hasn’t suffered an injury. It dates back to his time at UNC. He’s seen time away from the field with ankle, turf toe, knee, foot, and MCL injuries. His most recent stay in Washington ended with a torn bicep.

If he can stay healthy, Cooper can be the solution at left guard. His attributes make him perfect for what the Raiders want to be in 2019. Unlike Incognito and Good, he also has a winning record in the league. Through periods with Arizona, New England, Dallas, Cleveland, and Washington, he has a 28-18 record. In Dallas, he was part of the offensive line that was regarded as the best in the league.

The Raiders offensive line may not quite match the Cowboys line, but training camp will allow the Raiders to find the best left guard for the team. Let the battle commence.