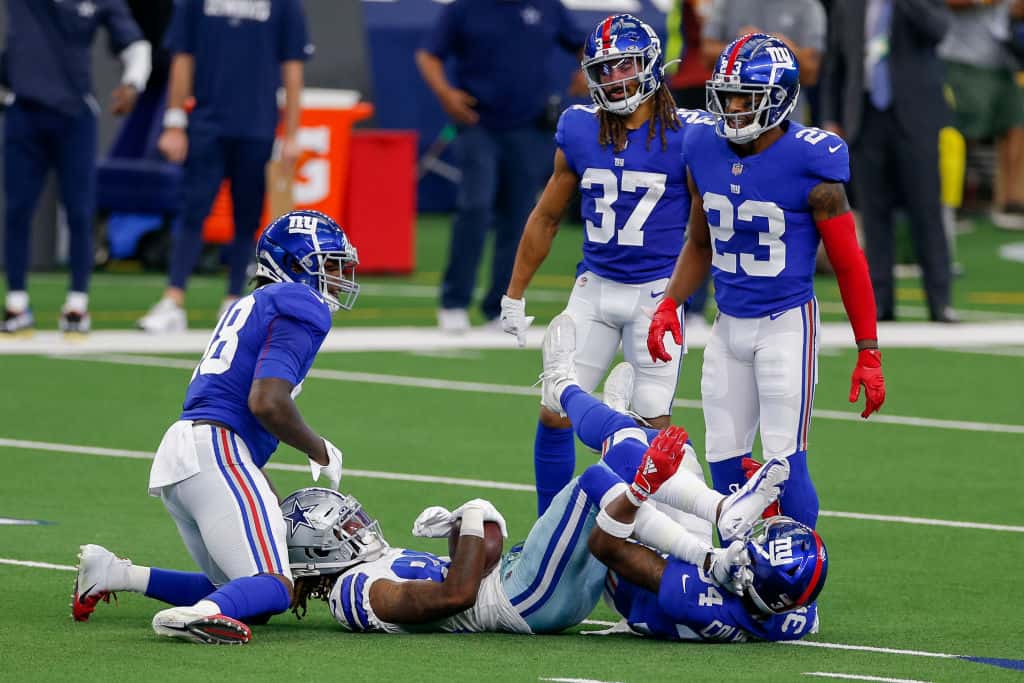 With Week 6 in the NFL about to kickoff, the PFN betting team has released a plethora of picks and analyses in an attempt to continue our profitable run. To help gather everything into one place, here are our NFL Week 6 best bets. For all of our other plays, make sure to check out the links to our content below.

NFL Week 6 Best Bets: Who does the PFN betting crew like on Sunday?

Washington has lost every first half so far, and not even the miraculous return of Alex Smith changed that last week. Giants just missed getting their first win at Dallas, and they put it right this week against Washington.

Atlanta’s fired their coach, and I think will respond against the Vikings, who have a bad defense and a hit-and-miss quarterback.

San Francisco’s season is on the line. This is a classic spot where a team that was recently great but is struggling rises up to remind people of how good they can be. 49ers were a Super Bowl team last year. Plus, the Rams are getting way too much credit for sweeping the awful NFC East.

Cleveland has lost 16 straight at Pittsburgh. But the Browns are on a four-game winning streak built on running the football, Baker Mayfield being more efficient, and the defense producing turnovers. While the Steelers are undefeated, they’ve beaten poor teams and not by a lot either. Cleveland is better than anyone Pittsburgh’s face, and this is the Browns’ moment to stamp themselves as the team to beat in the AFC North.

Expect this Patriots defense to stack the box and make Drew Lock prove he can consistently throw to his inexperienced group of receivers with his injured shoulder. I do not suspect that he can, and with the stacked box and a horrible offensive line, expect a stagnant running game to leave this Broncos offense sputtering. A bad run game makes this an easy candidate for one of my NFL Week 6 best bets.

This Broncos defense may keep them in the game for a while, but eventually, the New England rushing attack will wear them down and milk the clock in the process. As long as we can avoid some defensive or special teams touchdowns, I feel very confident that this under hits.

As mentioned before, this Week 6 NFL game opened with the points spread setting the Buccaneers as the favorite. The line then moved to the Packers and has settled at an even pick’em.

The Packers have the superior offense yet the inferior defense in this matchup. This is the first real difficult matchup for both teams this year, and only the third time ever these two quarterbacks have faced each other as starters.

I’m expecting the Packers’ more balanced offense to wear out the Buccaneers defense, especially after losing Vea for the season. The Buccaneers have too many injuries to key players, and it should ultimately be a deciding factor in this game.

Houston Texans at Tennessee Titans (-3.5) I was snake bitten by the Tennessee Titans this past Tuesday, but I am going back to the well betting against them this weekend. To start, I expect both of these offenses to find success in their respective matchups.

The Houston Texans throw the ball 59% of the time on early downs (first and second) in neutral game scripts (score within eight points) thus far in 2020. They average a 58% success rate (fourth-best), which will bode well against the Titans, who surrender a 57% success rate on early-down throws.

Likewise, the Titans will have success running the ball on early downs, as they do so 56% of the time to the tune of a 57% success rate (second in the league). Houston surrenders a 52% success rate in early-down runs, so we should expect Derrick Henry to have a productive day on the ground.

Where I see an edge with Houston is how these teams have fared from a yards per play (YPP) perspective heading into this game. The Texans have a +0.8 YPP differential to start the year, which means they are four points better than an average team on a neutral field.

However, that mark is buoyed in large part to their thrashing of the Jacksonville Jaguars this past Sunday. Before that game, the Texans had a YPP differential of zero. That doesn’t seem impressive initially, but considering they played the Kansas City Chiefs, Baltimore Ravens, Pittsburgh Steelers, and Minnesota Vikings, they could’ve been worse.

On the other hand, Tennessee has not looked good from a YPP perspective, despite their undefeated record. Their YPP differential sits at -0.7, which means they are 3.5 points worse than an average team on a neutral field. Before the Buffalo Bills game, Tennessee had a point differential of (+6). These metrics may not correct themselves this year, but winning games like this is not sustainable over time.

While I don’t think the Texans should be a (-7.5) point favorite on the road in the NFL Week 6 spreads, I don’t think Tennessee deserved to be “laying the hook” here. In a game that will be close, I’m choosing to back the better QB in this instance. I had Deshaun Watson as my QB3 in the league prior to the season starting. While he has gotten off to a slow start, I still hold him in high regard.

On the other side of the ball, Houston has ranked 30th in adjusted sack rate, while the Titans defensive line currently ranks 32nd. I don’t grade them as the worst pass rush in the league, but they have performed as such thus far.

I expect plenty of offense in a back and forth game. I’ll bet on the better QB finding a way to get it done in the fourth quarter. I don’t know why we’re getting the hook in this instance, but I’ll take it.

Plug your nose. Hold your breath. Close your eyes. This one won’t taste very good. I’m endorsing the Jets at +9.5 in Miami this week against the Dolphins. The Jets are historically bad, we all get that. The real question is whether the Dolphins are good enough to be favored by more than a touchdown against anyone.

Miami put on a show in San Francisco against the 49ers last Sunday, but they haven’t been more than a touchdown favorite in a game since 2016 when Adam Gase was on their sideline. The Jets are not only winless but also 0-5 against the spread and have lost each game by two scores or more.

While Miami should win this game outright, especially with Joe Flacco starting in place of Sam Darnold, covering a nearly double-digit spread is a different beast entirely. Regression to the mean is coming for the Jets despite all the ineptitude from their coaching staff. I’ll gladly take the points (grabbed them at +10.5 [-120] earlier this week) with a divisional underdog in an obvious letdown spot for the Dolphins.

As a Cowboys fan, this part of the article is tough to write. Dallas will be heading into this game with Andy Dalton as their starter after Dak Prescott suffered a terrifying ankle injury this past week. He is done for the year, and many pundits wonder if he will ever play another snap for the Cowboys.

Emotions will be running high for this team heading into Arizona. Meanwhile, on the other side of the field, Kyler Murray and Kliff Kingsbury look to continue their winning ways after defeating the lowly New York Jets with Joe Flacco under center.

It would be easy to say that Arizona should handily win this game playing against a backup QB. However, Dalton has been heralded as the best backup in the league. He is only a few years removed from bringing the Cincinnati Bengals to the playoffs with arguably only A.J. Green as his primary weapon. Now, he steps into an offense with Ezekiel Elliott, Michael Gallup, Amari Cooper, and rookie standout CeeDee Lamb.

The problem still remains that this Dallas defense is awful, allowing an average of 36 points per game. Murray tallied 411 total yards and two touchdowns against the Jets, and there is little chance that the Cowboys’ defense will be able to stop him. This game’s total sits at only 53.5, likely because oddsmakers aren’t sure how to line the Cowboys with Dalton under center.

Dalton looked more than capable replacing Dak this week, and both these teams will put up points. Do not be afraid of this total; take the over.