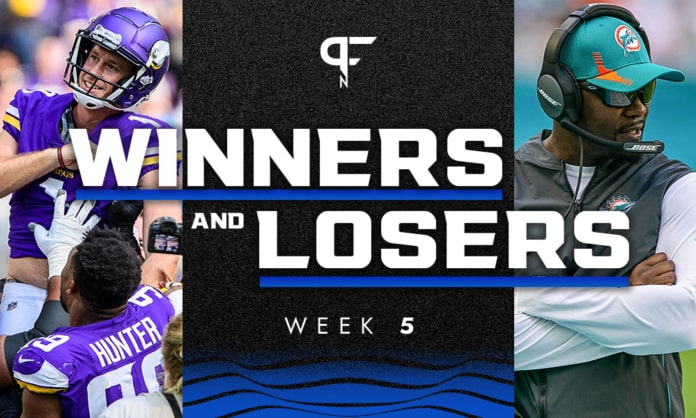 Ben Roethlisberger, Greg Joseph, and the Dallas Cowboys are the biggest winners in the NFL from Week 5. So, what about the losers?

Another Sunday, another terrific week of NFL action. As with any week, teams earn victories and face defeats — not just in the win-loss column, either. After the Week 5 dust has settled, we take a look at the biggest winners and losers in the NFL.

Here are the biggest winners from Week 5 in the NFL.

The Dallas Cowboys improved to 4-1 with a dominant performance on national TV. Dallas not only defeated the division rival New York Giants, but they also leaped through a huge hurdle in the process. Sunday’s victory marked the defeat of a Giants team who disrupted their 2020 campaign with the catastrophic injury to QB Dak Prescott.

It also marked 364 days since the injury Prescott sustained while playing against the Giants. His health makes the Cowboys a formidable team not only in the NFC East, but in the entire NFC.

Dallas accumulated 515 total net yards and got a defensive score late to cruise by New York, 44-20. Furthermore, Prescott got the demons off his back by throwing for 302 yards and 3 touchdowns.

The Vikings didn’t do too much on offense to instill confidence going forward, but they did get a monkey off their back themselves. The Vikings’ kicking unit, though they missed 1 attempt in the game, still came through in the clutch.

Due to recent events, no Vikings fan wants to see their kicking unit on the field with the game on the line. Despite that, with a mere 0:03 left on the clock, Greg Joseph trotted out on the field in a do-or-die moment against Detroit in Week 5.

Joseph drilled a 54-yard field goal with no time left to win the game for Minnesota. This isn’t the final answer for Minnesota this season — they’ll still need their offense to perform better. However, this is a step towards becoming a team that fires on all cylinders.

If you’re sensing a theme here, our biggest winners from NFL Week 5 are those players who got proverbial monkeys off their backs. Big Ben Roethlisberger proved he can carry the offense and push the ball downfield. He averaged a depth of target of 8.6 yards downfield, well above his season average of 7.2 yards.

Roethlisberger and the Steelers defeated the Denver Broncos by utilizing a downfield passing attack mixed in with a healthy dose of Najee Harris on the ground. Big Ben connected with Diontae Johnson on a 50-yard touchdown pass to set the tone, proving he still has the arm strength to get the ball to his receivers deep.

On the flip side of the coin, here are the biggest losers from Week 5 in the NFL.

How much more could one team lose via one injury? The Seahawks are now traveling blind without their true leader in Russell Wilson. After losing to the Los Angeles Rams last Thursday, it was announced that Wilson would miss at least 6-8 weeks following surgery on a ruptured ligament in his right middle finger.

The injury itself was gruesome, but the diagnosis was even worse. The Seahawks will now turn to Geno Smith — a serviceable backup — at quarterback. But in no way, shape, or form has he shown the ability to play like Wilson. Smith completed 10-of-17 attempts for 131 yards with 1 touchdown and 1 interception in relief on Thursday Night Football.

The Chiefs were porous as a team against Buffalo on Sunday night. Yet, their pass defense somehow looked worse than their quarterback — who threw multiple interceptions — and their rushing attack that gained 59 yards on 15 carries. The Chiefs gave up 315 yards to Josh Allen and the Bills’ aerial assault.

Making matters worse, they gave up 315 yards on just 15 completions to Allen. The Chiefs gave up 2 passing plays of at least 50 yards allowed, and four different Bills receivers had a reception of 24+ yards. Kansas City couldn’t cover outside nor over the middle, as Bills TE Dawson Knox hauled in 117 receiving yards to go with a touchdown.

It was a rough showing for the Chiefs overall, but mainly for a secondary that still has to face the Raiders and Chargers a total of three times this season.

It wasn’t just the way the Dolphins lost — it was the uproar afterward that has led their head coach into unneeded scrutiny. It wasn’t long after the game that injured QB Tua Tagovailoa’s trainer lashed out against the organization, going as far as to say it’s difficult to “talk to Flores.” Further comments and criticisms of Flores’ coaching style came to light in an unfavorable fashion.

There is currently a lot of controversy surrounding another NFL head coach in the state of Florida, but with more losses like this week’s — followed by more scrutiny from those around the organization — Flores’ days could be numbered. It’s starting to look like it’s not a matter of if Flores will be relieved of his command — it’s a matter of when.