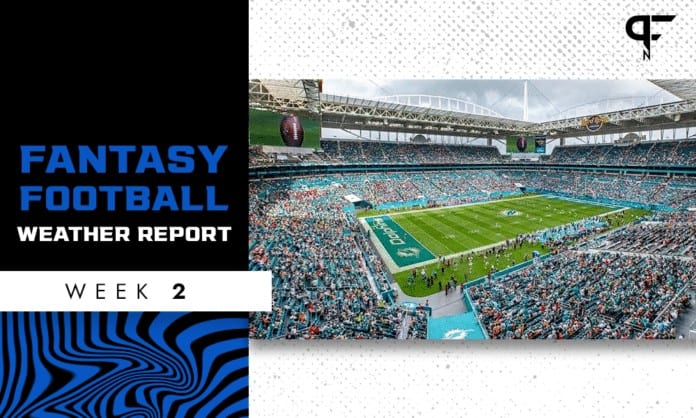 NFL Weather Report and Forecast Week 2: A chance of rain in Florida and Seattle

The 2021 NFL season is underway, and to help you make the best fantasy decisions, here is the NFL weather forecast and report for Week 2.

After a sensational return, the NFL and the world of fantasy football head into Week 2 with the weekly weather report. Who doesn’t need more information to stress over? We break down the NFL slate, the weather forecast and report for Week 2, and if any of your fantasy football players could be impacted.

Note: All times are Eastern Time, and the NFL Week 2 weather report will be updated if any changes happen from the time of writing to kickoff. The NFL weather forecast for Week 2 is based on reporting from the National Weather Service. All betting lines are from the NFL’s official website.

While most games have a clear weather report and forecast for Week 2, keep an eye on Florida for the typical summer showers.

If a game is being played in Florida, there will always be a chance of rain this time of year. It still baffles me how no one has at minimum a retractable roof. I mean, the Miami Marlins were smart enough to have one, and we know what that organization has been in recent years. But this is Pro Football Network, not Pro Baseball Network, so I’ll save you from the musings of a broken Mets fan.

Rain and showers are expected to roll into the area in the early-morning hours, and as the temperature rises, so does the chance of rain and thunder. By the time we hit kickoff, rain chances are around 70-80%, with a likely chance of some thunder. With that said, estimated rainfall totals don’t appear to be anything that will overly affect the game. The only “concern” will be the temperatures. Temperatures will be around 85 degrees, but when adding in the 70% humidity, it will feel closer to 95.

From a fantasy aspect, I am all over the Broncos, especially the rushing game. The Jaguars look rough and just allowed 120 yards to Mark Ingram and the Houston Texans. Expect both Melvin Gordon and Javonte Williams to feast in Week 2. If the rainfall exceeds predicted amounts, it will only boost the rushing game as teams go to a more conservative offensive approach.

Copy and paste. That was easy.

But honestly, it is a similar forecast to what Jacksonville will see. There is roughly a 50% chance of rain around kickoff and will hold at that level for the game’s duration. It will also be a muggy day in Miami, with a heat index closing in on triple-digits thanks to near 70% humidity. 5-8 mph winds won’t provide much relief, either. I don’t expect to see the rain make much of an impact, but a stray pop-up storm is always a possibility this time of year.

Does -3.5 seem way too low for the Bills? The Steelers defense is legit, and it was Week 1 for everyone. But Josh Allen torched this Dolphins defense for 7 touchdowns last season and had over 400 yards in their first meeting. If the Bills put up points, can the Dolphins keep up? Because nothing out of last week’s game filled me with confidence in Tua Tagovailoa’s ability to put up points in bunches — at least not yet.

Add in Will Fuller’s off-field status surrounded by mystery, and this feels cut and dry. This also means someone in some secret room will laugh at me as they hit the buttons on a remote like those Buffalo Wild Wings commercials as the Bills fail to cover.

Unless the NFL wants to add in another franchise in Florida, I think this will be the last one I need to touch on for Week 2.

If this game were at 1:00 PM ET, I wouldn’t be concerned at all, but with a 4:05 PM kickoff, they are right in the heart of when the weather could hit. There will be a chance of rain all day, but there is a 60% chance at kickoff and around 80% during the game. It’s more than likely we see rain around the area all day — it’s just a matter of whether or not it happens to come over Raymond James Stadium. Much like Jacksonville, look for heat indexes around 100 degrees once the humidity is factored in.

Like the previously mentioned games, I do not expect the weather to impact this Week 2 matchup from a fantasy aspect. This is presumably the most lopsided game of the week. You are starting Calvin Ridley like normal and even Kyle Pitts, but I would be sitting everyone else beyond them. As for the Buccaneers, lock and load them all into your starting lineup and expect a better game from Mike Evans. Tom Brady will want to get his season going after taking on the more difficult matchup last week.

Hey, Florida stopped being the center of attention! Good for you — that’s called growth.

Seattle is getting its first fall storm of the year. From Friday into mid-afternoon on Saturday, the area saw over an inch and a half of rain, with more expected to carry into Monday morning.

I don’t think we will see anything heavy, but there is currently a 90% chance of rain for the area on Sunday. But unlike Florida, it will feel like a PNW fall afternoon with temperatures between 55-60 degrees. #FlannelWeather

Even with the rain totals the area has seen, Lumen Field is more than capable of shedding rain. I don’t see there being any noticeable impact on the game.

Since this is a Monday Night Football game, there is plenty of time for the forecast to change. But as of right now, there is a chance we see some rain hit Green Bay. Chances of precipitation reach roughly 60% by 3:00 PM and should hold for the remainder of the afternoon. It’s expected to reach the 80-90% mark overnight with increased totals, but timelines could shift by kickoff.

This is also the only game in Week 2 with any wind speeds worth monitoring based on current weather forecasts and reports. Current projections show 10-12 mph sustained winds with gusts between 20-24 mph. With that said, Lambeau Field’s design helps mitigate the effects as it is a fully closed stadium with its shortest point still over five stories tall.

Start your Packers players this week. The Lions will not be able to hang with this offense in a showcase game for Aaron Rodgers as he proves he is more than a Jeopardy! host. Watch out for Marquez Valdes-Scantling to have a big week. He could be a sneaky play in deeper leagues and DFS for the primetime slate.

With a few games likely to see rain but nothing worth making lineup changes, the rest of the Week 2 calendar should be smooth sailing weather-wise.

In a battle of two rookie QBs, trust the one not facing Bill Belichick. Rookie QBs are 6-21 against him, with Tua’s victory last year the first for a rookie since Geno Smith in 2013. I’m fading WR Corey Davis this week despite his solid Week 1 — Belichick takes away the opponent’s top option. Damien Harris is a must-start for me in Week 2 after a 100-yard performance last week.

The Week 2 weather forecast should be sunny skies, 7-10 mph winds, and highs near 80 degrees.

The Jalen Hurts breakout is in full swing after a sensational Week 1 where he passed for 264 yards while adding 62 on the ground. Additionally, Hurts was the QB6 with 28.8 fantasy points. He is a must-start each week with his rushing upside. Also, Miles Sanders could be in for a big week after watching the 49ers allow 49.4 fantasy points to D’Andre Swift and Jamaal Williams.

The weather in Philadelphia will not be a concern for fantasy in Week 2. The current report calls for sunny skies, 6 mph winds, and highs near 80 degrees.

Who will the Steelers be in 2021? It’s hard to take much away from Week 1 as neither the Steelers nor the Bills could move the ball. The one takeaway is the usage of Najee Harris is everything we could have hoped for, playing 100% of the offensive snaps while recording 19 opportunities.

For context, only eight running backs averaged 19 or more opportunities per game in 2020. Of those who played in 14 or more games, which excludes Christian McCaffrey and Joe Mixon, all finished inside the top nine in PPR scoring last season.

When looking at the weather report for Week 2, expect 82-degree temperatures, light winds, and sunny skies.

At some point, head coach Matt Nagy has to get out of his own way, right? I mean, I know he is being paid to make decisions, but there is no way that someone can honestly tell me Andy Dalton is a better option at QB than Justin Fields. Once he eventually makes the switch, this offense could explode.

Speaking of exploding, that’s what Cole Kmet is set to do. Kmet recorded 7 targets, hauling in 5 for 42 yards while playing on 74% of the offensive snaps in Week 1. This is a massive number; Jimmy Graham was on the field for just 14 plays. The Bengals ranked 26th in fantasy points allowed per game to tight ends (14.4) in 2020.

As for the weather forecast in Week 2, expect near 82-degree temperatures, 7 mph winds, and sunny skies.

With Odell Beckham Jr. ruled out, Jarvis Landry is a must-start for fantasy. Landry is coming off a WR17 finish in Week 1 (19.4 points), catching all 5 targets for 71 yards and a touchdown. In his nine games without Beckham Jr. in the lineup, Landry has averaged 7.4 targets, 5.3 receptions, 61.9 yards, and 14.3 fantasy points. Last week, the Texans allowed 50.8 fantasy points to WRs against the Jaguars. I’m all-in on anyone wearing a Browns jersey this week.

The weather in Cleveland will not be a concern for fantasy in Week 2. The current report calls for sunny skies, 6 mph winds, and highs near 79 degrees.

If anyone was concerned about rust being an issue for Christian McCaffrey, I think he proved he is still good at football. McCaffrey exploded out of the gates in Week 1 with 21 carries for 98 yards and 9 receptions for 89 yards. Did he score a TD? No. Are we just being greedy at this point? Yes, but welcome to fantasy football, where nothing is ever good enough.

We thought last week that it was an AFC Championship Game preview. Well, this is also an AFC postseason preview. But I am concerned for Baltimore. While the loss of Gus Edwards took the news, the loss of Marcus Peters is even more impactful. The 1-2 punch of Peters and Marlon Humphrey is as good as there is in football. So how much does Peters’ injury impact the team? Well, Derek Carr just dropped 435 yards on them in Week 1 on Monday Night Football. What do we think Patrick Mahomes and Co. might do against them?

As for the weather forecast in Week 2, expect temperatures in the low 60s, light winds, and clear skies.

Because these NFL games are indoors, the weather conditions can be controlled. As such, the only forecast and reports are that it will be optimal playing conditions for these teams. The passing and kicking game will not be affected.