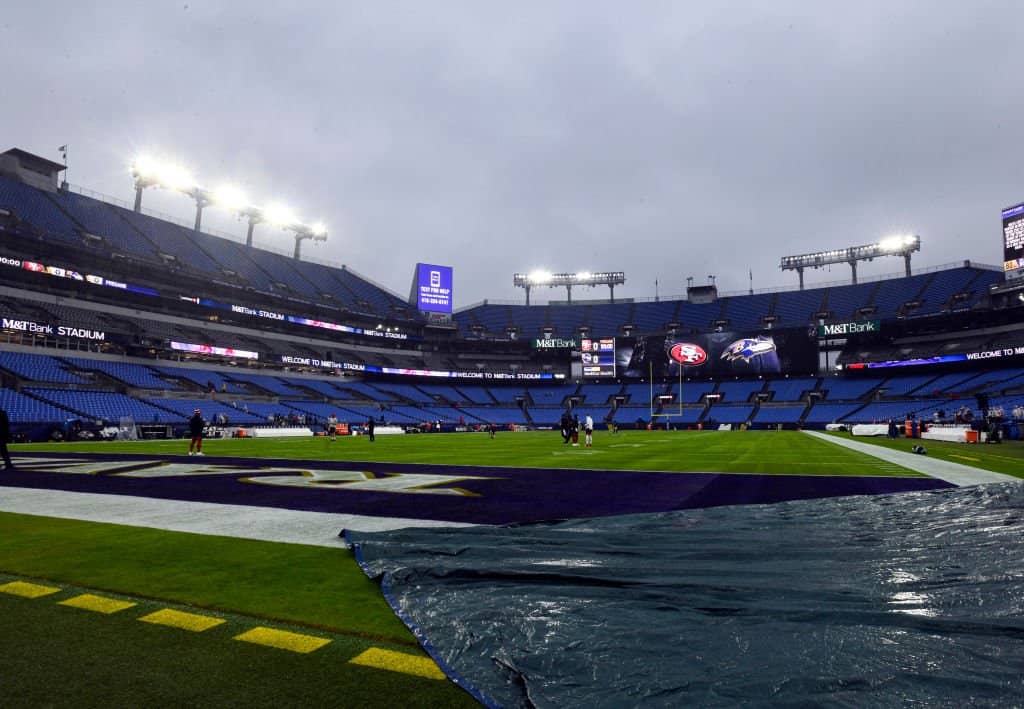 It was only a matter of time until one of these NFL weather forecast articles was going to be filled with bad weather. We got lucky for a while, but the Week 5 NFL weather forecast is filled with games that will have their fantasy football players impacted by rain. Not only are we dealing with the remnants of Hurricane Delta, but we even have a game that is being played on Tuesday. Well, for now at least. This doesn’t make things easy for the Week 5 NFL weather report.

But, we need to roll with the punches this season because it is anything but normal. In fact, I think we have reached the “new normal” and will be adjusting schedules every week, which is just as much of a pain as it is for anyone involved with the NFL or fantasy. The best thing we can do is stay well-informed, and hopefully, this article can help you make those final start-sit decisions with a bit more confidence.

Note: All times are Eastern Standard Time, and forecasts will be updated if any changes happen from the time of writing this up to kickoff. All betting lines are from DraftKings Sportsbook.

The NFL weather forecast for Week 5 tells us that we are going to see several games impacted by rain. However, we will start with the one that is likely to see the highest rainfall totals – the Los Angeles Rams at Washington Football Team.

The chance of rain increases throughout the morning and approaching kickoff, peaking right at 1:00 PM at a 100% chance. As the game progresses, so will the intensity of rain, and we could see between a quarter of an inch to three-tenths of rainfall. The one positive is that currently, we expect to see relatively low wind speeds at six mph.

Even without the weather forecast the way it is, we already had questions on what the Washington offense would look like after naming Kyle Allen the starting quarterback. How will this affect someone like RB Antonio Gibson? Can Terry McLaurin maintain his must-start status, or will his production take a hit? If I have either in fantasy, I am not panicking, but I will be watching intently.

A very similar NFL weather report for Week 5 holds true for the matchup between the Philadelphia Eagles and Pittsburgh Steelers. The chance of rain, as well as the intensity, will rise as we hit the afternoon. Once the rain starts, it will be there to stay. The main difference is the amount as current forecasts call for between a tenth to a quarter of an inch of rainfall. Later in the game, when ball security is at a premium, it could be compromised.

The same goes for footing on what has traditionally been one of the worst playing surfaces in the NFL due to high usage in the season by the Steelers, University of Pittsburgh, and various high school teams. Outside the rainy forecast, expect 70-degree temperatures and five mph winds.

Fantasy analysis: Start players who are wearing black and ignore those in green. It’s really that simple sometimes.

Am I allowed to use copy & paste in articles, or is that cheating and lazy? Change out the teams and the location, and you have a carbon copy of the Pittsburgh Week 5 NFL weather forecast for the Cincinnati Bengals and Baltimore Ravens.

The one difference is that there are viable fantasy players on both sides of the ball, but how many of them do you trust? Lamar Jackson is a lock every week, as is Mark Andrews. Beyond them, there aren’t many other players right now that you feel confident for a team full of talent.

Yes, Marquise Brown is a highlight waiting to happen, but he and Jackson can’t get on the same page. At the running back spot, Mark Ingram and J.K. Dobbins eat into each other’s ceiling. Even though both have been great NFL players, they rank as RB41 and RB42 in PPR scoring formats.

The first game of our Week 5 Monday Night Football double-header looks to be another wet game. The 51-degree temperatures and light winds will be accompanied by occasional rain during the game that will bring rainfall totals of around a tenth of an inch to just under a quarter. As this is still over 24 hours away, we will need to monitor this game if there is any shift in the Week 5 NFL weather report.

Regardless of the weather, Cam Newton will miss another week as will CB Stephon Gilmore. The New England Patriots offense struggled last week to find its rhythm, and I could see it happening again this week. If you need some under the radar plays for Week 5, whether it be due to bye week or injury, both Damien Harris and especially Tim Patrick are intriguing plays that could have future value. I talk more about Patrick and other wide receivers in my article about Julio Jones’ injury status.

Safe to say that the odds-makers in Vegas don’t care about what the Week 5 NFL weather forecast says by giving this the highest total of the week. However, I believe it is worth a second look. It will be pouring all day in Seattle, and that won’t stop by the time kickoff happens.

Even if it starts to break up a bit by the end of the game, we will have seen it dump around two-tenths of an inch of rain during the game. In addition to the rain, we’ll see seven mph winds and 55-degree temperatures. We might be starting to see the Pacific Northwest live up to its rainy nature beginning in Week 5.

Finally, a game where I don’t have to mention rain in the Week 5 NFL weather report. On TV, the 83-degree temperatures and sunny skies will look like a perfect day for football. However, at Arrowhead Stadium, things will feel slightly different as they are forecasting for 12-14 mph winds and gusts around 22 mph.

This game sits right on the borderline when we start to see any impact from wind speeds. Usually, anything below 15 mph isn’t worth bringing up as their effect is negligible. I am only mentioning this game due to the wind gusts we could see as if it hits at the right time, a deep pass or kick could be taken off its intended trajectory.

Do you want me to sum up 2020 in one sentence? Joe Flacco is the starting quarterback of the New York Jets in Week 5. I can’t believe I even wrote that. He is getting Le’Veon Bell back from his stint on the IR, but this is the Jets and Adam Gase, so I have no expectations or preconceived notions of them playing well.

In addition, this is the last week I am backing Kenyan Drake. Facing off against a bottom-six defense against the running back, if he can’t do it now, I don’t know if he ever will. At this point, give me Chase Edmonds, who, while only playing 34% of the snaps to Drake’s 67%, sits only 0.2 PPR points behind him.

As for the weather forecast, we are currently looking at cloudy skies, 64-degree temperatures, and light winds at just 4 mph.

If there was ever a game a team needed, it was this one for the San Francisco 49ers against the woeful Miami Dolphins. Finally starting to get healthy, they face off against one of the worst defenses in the ultimate get right game.

After losing Nick Chubb for several weeks, the Cleveland Browns will rely on Kareem Hunt and D’Ernest Johnson to carry the load on what has become a very run-friendly offense. I trust Hunt as much as one can against a stout run defense, but I am personally fading Johnson. I know we all spent a bunch of FAAB on him, but I don’t think he will have a great week. Start him if you are desperate.

I bring this game up because it seems we are just waiting to see it get moved to a later date. A single positive test or even a false reading will likely move this game to another week. If you have players in this game, I would exercise extreme caution leaving them in your lineups as there would be no fallback option if this is canceled.

Teams on a Bye Week in Week 5