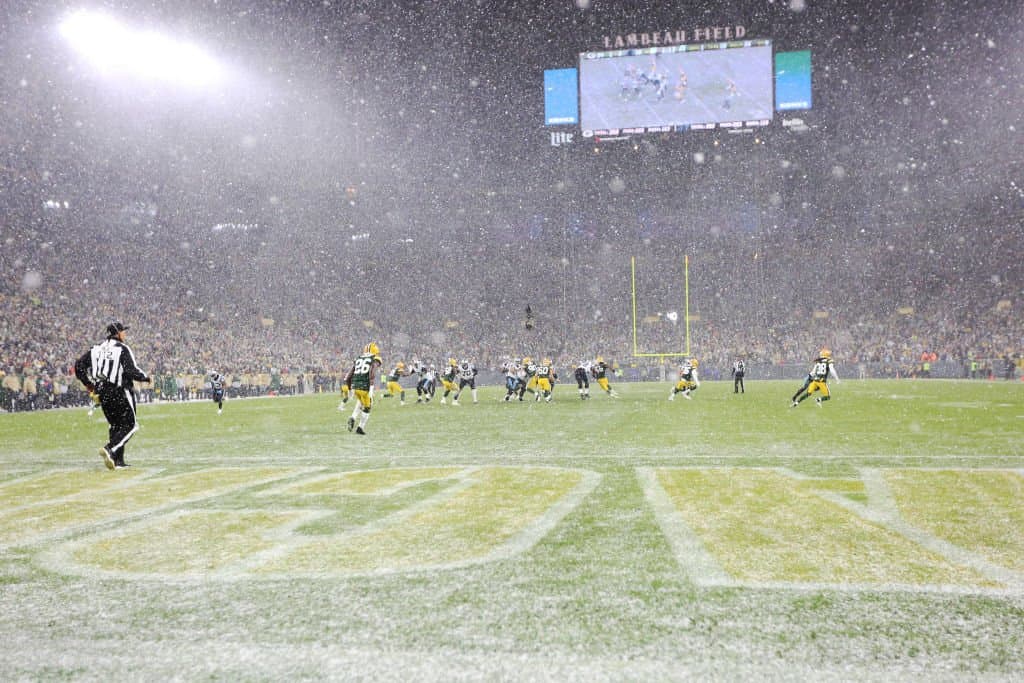 With fantasy football championship berths on the line, the Week 16 NFL weather forecast could be pivotal in your chances of advancing. With the days getting shorter and colder, the odds of poor weather reports for NFL games increase for Week 16. As with tradition, we break down the slate and see what the NFL weather forecast and report will look like for Week 16 and how it might impact your fantasy football team.

This week has been like trying to walk through a minefield. Dodging Alvin Kamara and his six TDs. Also, Mike Evans, Jeff Wilson, and even Myles Gaskin all blowing up at the same time. We need all the help we can get this week. Luckily for us, there is only one game on the Week 16 slate that should give us any weather concerns when looking at the NFL schedule.

Please note that all times are eastern standard time, and the NFL Week 16 weather report will be updated if any changes happen from the time of writing this up to kickoff. The NFL weather forecast for Week 16 is based on reports from the National Weather Service.

We couldn’t get out of 2020 with at least one more game with some interesting weather. Go figure it has to happen in primetime with fantasy championships on the line.

The Frozen Tundra of Lameabu Field will live up to its moniker in Week 16, thanks to a blanket of snowfall. Starting around 10 AM ET, snow will move into the Green Bay area, lasting through the game. The National Weather Services are reporting that snow will last until 9:00 PM ET.

The Packers grounds crew is used to snow. However, as of right now, between an inch to an inch and a half of snow is expected during the game. That’s not really anything we need to worry about as far as having an impact. Lambeau’s field is also heated to keep the ground from freezing and sticking too badly.

Teams will use longer cleats, and footing shouldn’t be too bad, but if we will give an edge one way or another, it would be to the rushing attack. Lucky for these teams, they have two of the best in the NFL.

Outside of the snow, expect to see some higher winds at times. Sustained winds will be around 13-16mph, and gusts could reach the mid-20s. However, thanks to the stadium’s high walls, this won’t impact the game too much.

As for fantasy, both Jones and Henry should eat in Week 16 regardless of the weather. Henry finished with 100-plus rushing yards in five of his last six games, including four of them with 133-plus yards. And Jones has the backfield to himself with Jammal Williams ruled out with a quad injury he sustained in last week’s game. Jones had a season-high 23 touches during that game that he turned into 158 total yards and one touchdown.

Official Monkey Knife Fight play: Derrick Henry, Aaron Jones, and Davante Adams to have more than 2.5 TDs for a 2x prize. The ability to choose your goal is part of the beauty of Monkey Knife Fight. Only play this contest after using Monkey Knife Fight promo code PFN — it could make for a quite profitable week! You can’t find another DFS site that allows you to find matchups like this.

Pittsburgh is a mess, and this is not the matchup to work on things. The rushing game is the matchup to watch for me in this Week 16 game. Can Jonathan Taylor keep up his pace against the best rushing defense in football? Do the Steelers even have a running game to improve on anymore? Neither James Conner nor Benny Snell is more than an RB3 or RB4, respectively.

When looking at the Week 16 weather report for the Colts vs. Steelers game, expect 43-degree temperatures, four mph winds, and sunny skies.

How can the Falcons even hope to keep up and stop the Chiefs’ passing attack? Travis Kelce is just 60 yards off, breaking the all-time single-season record for yards by a tight end. Hill has seen double-digit targets in six of his last eight games. And he gets a Falcons defense that has allowed the second-most PPR points per game (43.8) to wide receivers this year. Even if Calvin Ridley has a monster game without Julio Jones (which he usually does), I don’t see it being enough.

I love a good tank, and the Jaguars are doing just that after landing in the driving seat for Trevor Lawrence. Expect David Montgomery to have a field day as well. In his previous four games, he has 434 rushing yards and has scored five TDs in his last three. Now he gets a Jaguars defense that is 30th in the NFL in points to RBs at 28.75. They allow 116 rushing yards per game (4th), 4.54 yards per carry (10th), and 16 total TDs (6th).

Don’t look now, but Lamar Jackson is back. His fantasy points over the last three weeks? 25.7, 34.9, and 29.2. He’s now completed 70-plus percent of passes in four of his last six games. And he’s running as much as ever, finishing with 253 yards and four touchdowns over the previous three games.

So, who is Baker Mayfield going to throw the ball too? Jarvis Landry, Rashard Higgins, and Donovan Peoples-Jones are out due to going on the NFL’s reserve list. Imagine being the Jets. Win against the Rams last week, the Jaguars start benching guys, and the Browns are out of WRs. I hope they like the second-overall pick.

When looking at the NFL weather report, look for sunny skies, four mph winds, and 38-degree temperatures that will feel like the mid-20s.

Washington has two different reports that are huge for fantasy. First, ESPN’s Adam Schefter reported that Terry McLaurin is not expected to play. Second is RB Antonio Gibson appears that he will play according to Schefter. The risk is massive, but so is the potential reward in fantasy championships in Week 16.

I am very curious about how this game is going to go for the passing games. For one, Seattle has suddenly gotten good on defense. The Seahawks are the No. 1 team against wide receivers over the last four weeks, allowing just 42 receptions for 360 yards with no touchdowns. You’d have to go back to Week 9 to find the last time the Seahawks have allowed a wide receiver touchdown. Robert Woods and Cooper Kupp are mid WR2s and high WR3s. The DK Metcalf will see Jalen Ramsey leaving Tyler Lockett’s ghost to have his first good game when not playing either Dallas or Arizona. Those three games have accounted for 49.78% of his fantasy total for the season.

Get ready for another Josh Allen and Stefon Diggs game. Stephon Gilmore is out, and their connection could not be any hotter. He now has double-digit receptions in four of his last five games. He is locked in as a solid WR1 this week.