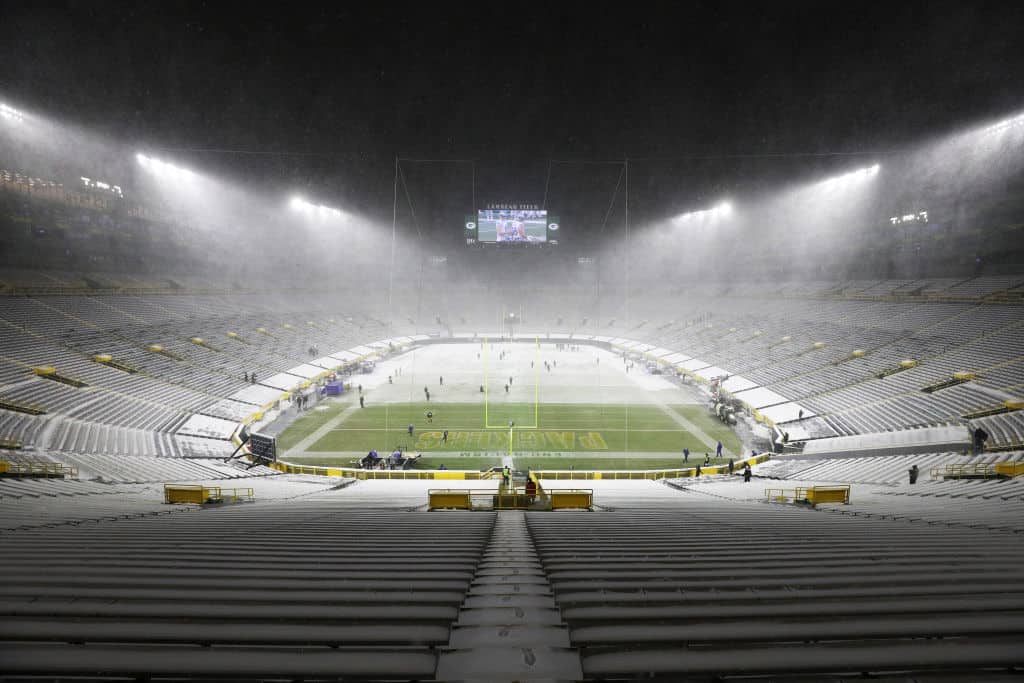 GREEN BAY, WISCONSIN - DECEMBER 27: Snow falls during warmups between the Green Bay Packers and the Tennessee Titans at Lambeau Field on December 27, 2020 in Green Bay, Wisconsin. (Photo by Dylan Buell/Getty Images)
What's in this article? Click to show
NFL Weather Forecast and Report | Divisional Round
No Weather Report/Forecast
A slight chance to see some wintery conditions in Buffalo for the Divisional Round
Worry-free NFL weather forecasts for the Divisional Round
Want more NFL news and analysis?

With only four games on the slate for the NFL’s Divisional Round, the weather report is going to be a bit shorter. As with tradition, we break down the slate and see what the NFL weather forecast and report will look like for the Divisional Round tilts this weekend.

Please note that all times are eastern standard time, and the NFL Divisional Round weather report will be updated if any changes happen from the time of writing up until kickoff. The NFL weather forecast for Divisional Round is based on information from the National Weather Service.

We were lucky for the Wild Card games last week as far as the weather. This week, we look to get another break. Of the three outdoor games, there should be nothing that will overly impact the play on the field. Only one game barely manages to creep out of the worry-free zone.

Indoor games for the Divisional Round

Earlier in the week, some weather reports or talking heads made it seem as if this was going to be a significant winter weather event. Well, as much as I would love to see it, that isn’t the case.

It’s going to be chilly because, after all, it is Buffalo and the middle of winter. Expect to see temperatures hovering between 34 and 28 degrees with the wind chill. 10 to 13 mph winds will be dropping the temperature, but those are well below the threshold where we start to see it impact the game.

Now, as for what might be falling from the sky for this matchup, I am not concerned. Recent models over the last 48 hours have shifted away from calling for a high-likelihood of precipitation to only a 30% chance to see the wet stuff. We could see some wintery mix in the area for the game, but any accumulation would be negligible.

Worry-free NFL weather forecasts for the Divisional Round

No NFL team scored more points during the regular season than the Green Bay Packers. Nobody has played better defense than the Los Angeles Rams. This will be the first time the NFL’s top-ranked scoring offense and scoring defense have faced off in the postseason since the New England Patriots-Atlanta Falcons Super Bowl on Feb. 5, 2017.

Jared Goff will start, but there is no way head coach Sean McVay is willing to go throw for throw with Rodgers. Expect a hefty dose of Cam Akers in this matchup.

When looking at the NFL weather forecast report for this Divisional Round game, look for cloudy skies, seven-mph winds, and 34-degree temperatures.

All Cleveland Browns fans need to think about is the number 32. No, that doesn’t mean Jim Brown is going to play for them. That is the score they have to shoot for in order to knock off the Kansas City Chiefs.

In nine career losses as a starter, including playoffs, Patrick Mahomes’ teams have averaged 31.3 points per game. Only once were the Chiefs held below 24 points, and three times below 30 points.

It’s going to take an incredible first-quarter scoring onslaught like the Browns put together last weekend to make this happen. Can lightning strike twice?

Be sure to follow us on Twitter: @PFN365 to stay up to date with all things around the NFL. Also, continue to visit Pro Football Network for NFL news and in-depth analysis concerning the 2020 season and beyond.

In this article:Featured, NFL weather