Thursday Night Football is your first chance to get in on some Week 13 fantasy football action. Here are our top Underdog Pick'em plays for TNF.

Fantasy football is more than just the weekly head-to-head games we’ve all grown to love. On Underdog Fantasy, managers can put their player-projection skills to the test by predicting player stats. Here are my top Underdog Pick’em plays for the Buffalo Bills vs. New England Patriots Thursday Night Football Pick’em contest.

Underdog Pick’ems allows fantasy managers to predict stats and fantasy-point totals for almost all fantasy-relevant players. You can make two picks that pay out 3x your entry fee or add more selections to your entry for higher payouts.

The levels are 3x, 6x, 10x, and 20x, progressing with each additional pick’em you add to your entry. Let’s take a look at this week’s Underdog Pick’ems.

The Patriots played an absolute shootout against the Vikings on Thanksgiving. Yet, here I am with four picks that are all anti-offense.

Devin Singletary’s rushing-yards projection is 53.5 yards. I like him to go lower than that, but Underdog was so kind as to give us an additional 16 yards if we take his total yardage. Thanks? I guess?

Over his last three games, Singletary has posted receiving totals of eight, 11, and zero. Just 11.5% of the receiving yards allowed by the Patriots go to running backs. Singletary is not going to supplement his rushing with receiving.

So, he has to get there mostly on the ground. That seems unlikely to happen against the fifth-best run defense in the league. From a fantasy-points perspective, the Patriots are the best. From a pure yardage perspective, they allow the fifth-fewest rushing yards per game to running backs.

Singletary has had big games on the ground. But all of them have come against soft run defenses. Against teams like the Jets, Ravens, and Titans, he couldn’t get much going. I expect him to finish with no more than 50-60 total yards.

On the passing side of things, let’s just fade Gabe Davis. It seems like the prudent thing to do every week with this incredibly overrated wide receiver.

Davis’ supernova performance against the Chiefs in last season’s playoffs fooled everyone into thinking he was better than he is. While he’s on pace for the best season of his career, he certainly hasn’t been what we would expect from Josh Allen’s WR2.

MORE: Should You Start Gabe Davis vs. Patriots?

Davis has surpassed 53.5 receiving yards five times this season. The only instance I would consider to be against a quality pass defense was in Week 1 against the Rams, who were good at the time. When Davis ran into defenses like the Dolphins, Ravens, Packers, and Jets, he couldn’t even get to 40 receiving yards.

The only way Davis is getting above this number is with a long reception. Now, to be fair, that’s kind of his thing. Davis’ average depth of target is an impressive 15.6 yards, the third highest in the league. But his target share sits at 16.7%, outside the top 50.

The Patriots, meanwhile, allow just a 37% completion rate on deep balls. I think Davis will have a rough outing on Thursday night.

I’m surprised we have a projection on Jakobi Meyers, given his questionable status. Meyers suffered a shoulder injury on his very first reception of last Thursday’s game. He missed the remainder of the first half before ultimately returning at far less than 100% in the second half. He was in noticeable pain after every reception.

Meyers is likely going to play tonight, but I’m very concerned about an in-game aggravation. This projection seems to not be taking into account the fact that Meyers could fall the wrong way once and be done for the game.

The reason I like this lower even more is because Meyers can be healthier than I think, play the full game, and still fall short.

I find this projection very interesting because it’s a number Meyers has surpassed in all but two of his games this season. However, the two games he failed to get there were against quality pass defenses in the Bears (at the time) and Colts. He also just barely got there against the Jets.

The Bills do allow the ninth-most receiving yards per game to wide receivers. But they also haven’t had Tre’Davious White all season, who is now back.

Additionally, this game is projected to be a close one, thus reducing the likelihood of the Patriots having to go into chuck mode due to negative game script. The Patriots have a 46% neutral game-script run rate. Without any extra volume, Meyers should struggle to get to 50 yards.

I must admit that kicker props aren’t usually my thing. My fear is always that I’ll get the read correct, but the kicker will just miss. That is really the only risk I see with Tyler Bass tonight, as I’m quite confident he attempts at least two field goals.

Bass has attempted multiple field goals in all but two games this season, including five straight.

The Bills’ offense is one of the best in the league. They’re going to be in scoring position plenty. All we need is for them to not convert two trips into opposing territory into touchdowns. I like our chances against a defense that, despite last week’s dismal effort, has been excellent all season.

The Patriots won’t be able to shut down Allen and Stefon Diggs, but they can bend without breaking — which is exactly what we need, and what I expect. 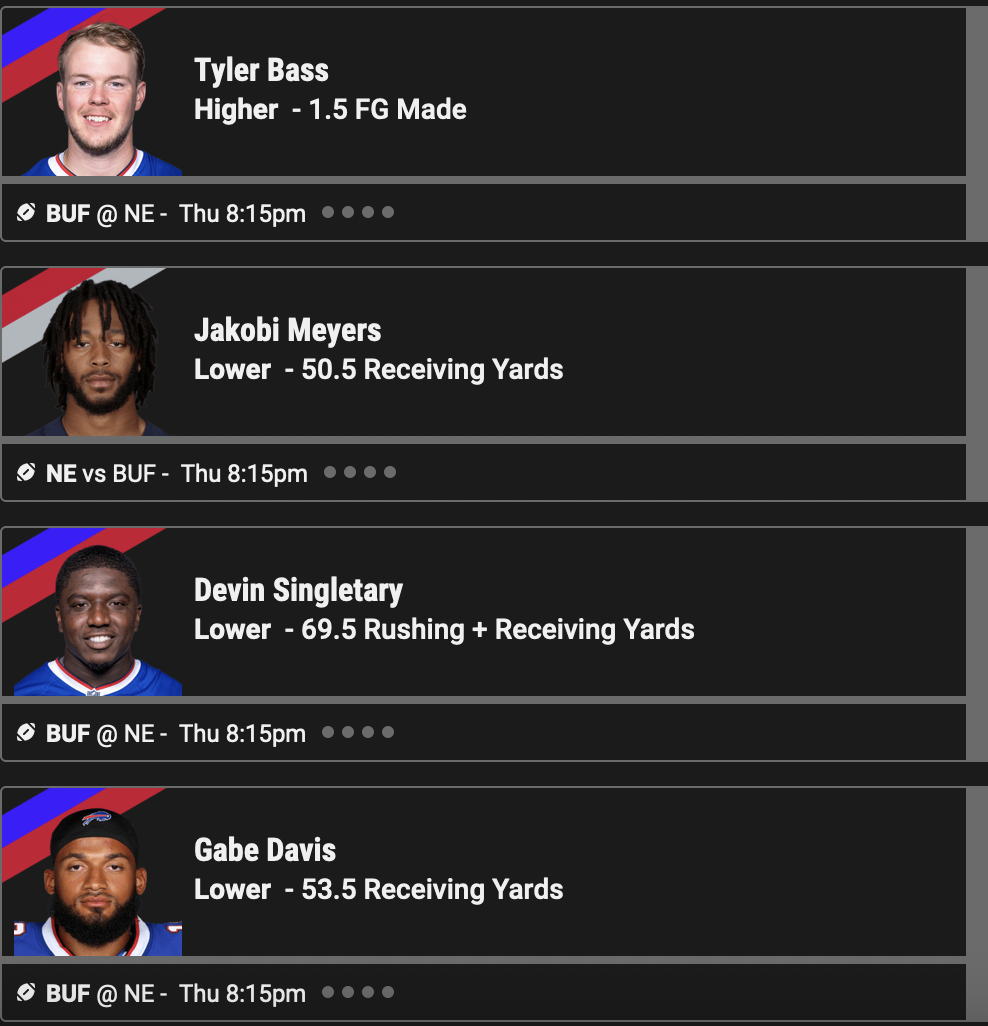