Monday Night Football is your last chance to get in on some fantasy football action. What are our top Underdog Pick'em plays for MNF?

Fantasy football is more than just the weekly head-to-head games we’ve all grown to love. On Underdog, fantasy managers can put their player-projection skills to the test by predicting player stat lines. Here are my top Underdog Pick’em plays for the Monday Night Football Pick’em contest.

Underdog Pick’ems allows fantasy managers to predict stat lines and fantasy-point totals for almost all fantasy-relevant players. You can make two picks that pay out 3x even money or add more selections to your entry for higher payouts.

The levels are 3x, 6x, 10x, and 20x, progressing with each additional pick’em you add to your entry. Let’s take a look at this week’s NFL pick’ems.

The 49ers have three truly elite offensive weapons in Samuel, George Kittle, and Christian McCaffrey. They have two more high-quality options in Brandon Aiyuk and Elijah Mitchell. Yet, this is not a high-volume, fast-paced attack.

Samuel has reached 50 receiving yards in just one of his last four games, and that was against the Falcons’ league-worst pass defense against wide receivers.

The Cardinals are 15th in receiving yards allowed to WRs. They are playing with their backup quarterback. This game does not project to be a back-and-forth, high-scoring affair. Samuel will have to break off a big catch to surpass this number. I’m banking he won’t.

I really debated which way I wanted to go with George Kittle. His receiving-yards projection is set at 42.5. While I do think he gets higher than that as well, I settled on his fantasy-points projection because there are more ways to win it.

The above-described nature of the 49ers’ offense is going to make Kittle’s production erratic on a weekly basis. Admittedly, I’m trying to predict when he will smash. Could there really be a better spot than tonight?

The Cardinals can’t stop tight ends. No team sees opponents target the tight end at a higher rate, and no team allows a higher percentage of their total receiving yards allowed to the position. Perhaps most importantly, the Cardinals have surrendered the most touchdowns to tight ends.

Kittle could easily pop off for something like six catches for 75 yards, which would get him above his fantasy-points projection. Conversely, he could just find the end zone, and that would almost certainly be enough with just minimal production otherwise. Either way, I think Kittle has a nice fantasy game tonight.

On the other side of the coin, I want to fade James Conner tonight, but I don’t think fantasy points is the move. He could very well have a solid game, but it will likely need to come through the air or via a touchdown.

As underdogs against the 49ers, it’s unlikely the Cardinals will be able to feed Conner 20+ carries like they did against the Rams last week. For example, in Week 9, Conner only handled seven carries in a double-digit loss to the Seahawks. 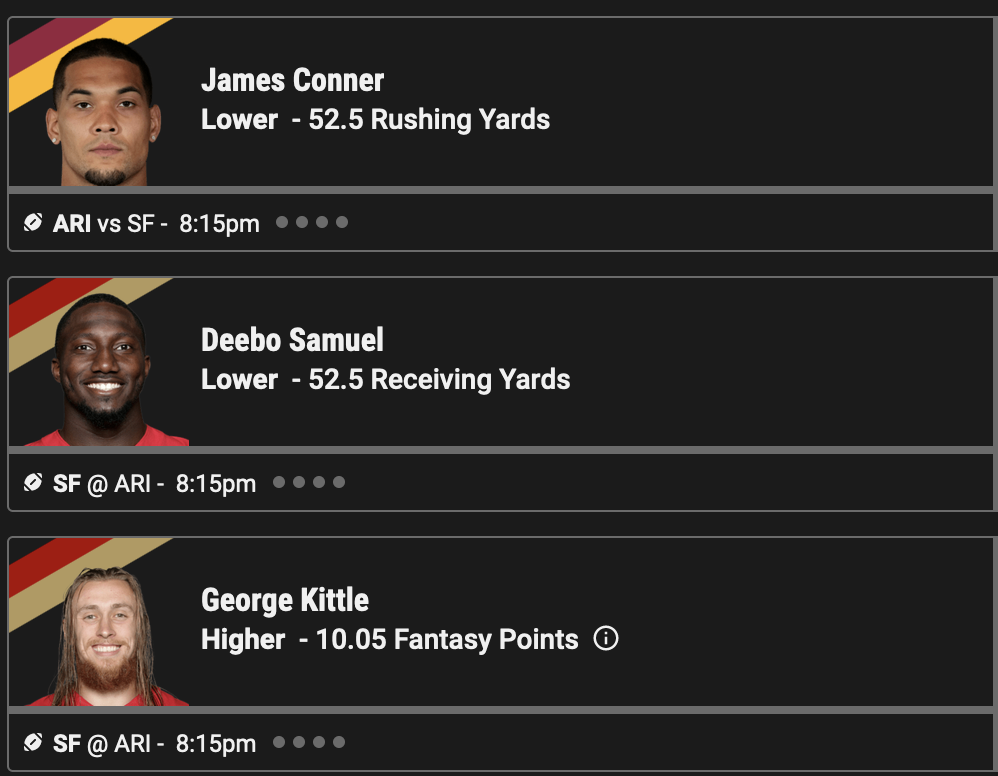